Whether it's wine-dispensing chairs or dog-petting hands, the local dad behind Matt Thompson Woodworks has found internet fame with his Rube Goldberg-esque inventions. 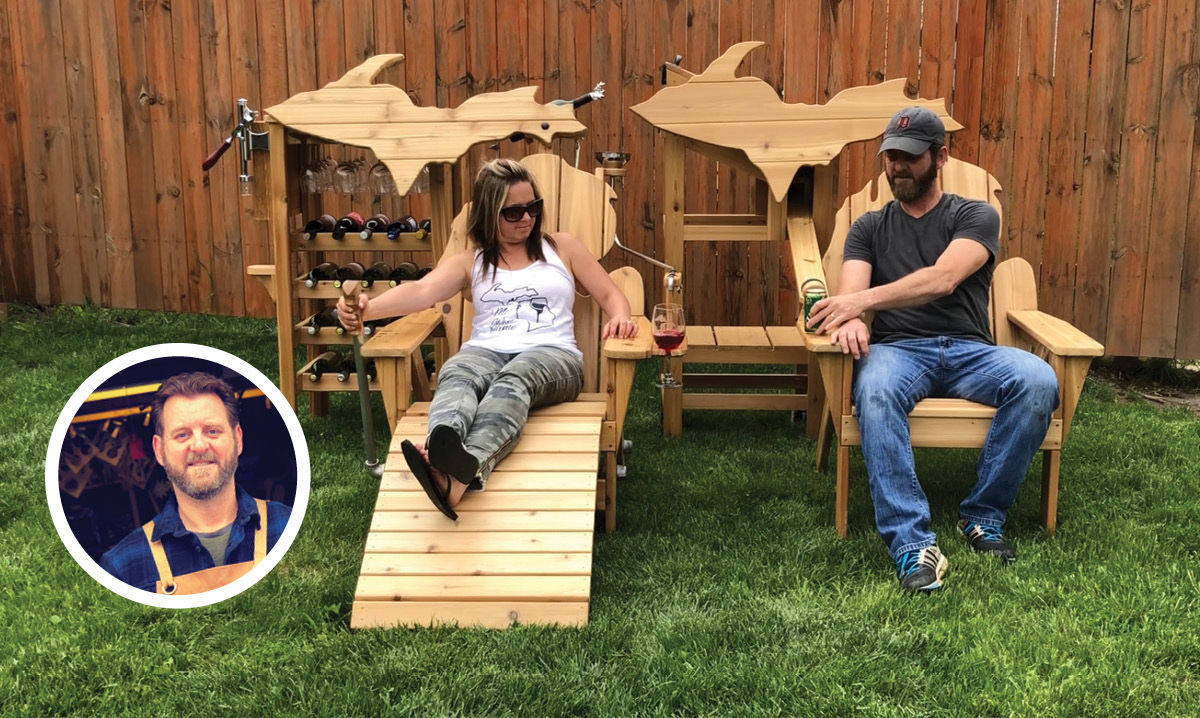 When the idea for an invention strikes him, woodworker Matt Thompson can’t wait to make it come to life.

That passion, combined with a gift for the craft, has made the Garden City dad and his wacky inventions a social media sensation, with more than 65,000 Facebook fans and wildly popular videos shared around the world. They even headed on the road, debuting in an exhibit at a Wisconsin kids’ museum in March.

Thompson, now 50, was 20 years old and only looking for a paycheck when he hired on to help a cabinetmaker who worked out of his garage. While Thompson moved on after just a year, he took with him a newfound knowledge of tools and how to use them.

“I started doing my own home repairs, I made bunk beds for my kids,” says Thompson, whose fulltime gig is in fire protection maintenance at the U-M hospital in Ann Arbor.

A chair for charity

A charity drive ultimately led this father of three deeper into the world of woodworking. He and his wife, Hollie, joined Team World Vision, which raises funds for clean water projects in Africa. Through that organization, he met another team member who built Adirondack chairs.

To raise funds for the cause, Thompson decided to make a Michigan-shaped chair. While the usual Adirondack design adapts well to the state’s “mitten,” it’s not quite complete.

“I wanted to incorporate Michigan’s UP,” he says. “That lead to the beer chair.”

Thompson’s solution was to create a connected cooler in the shape of the Upper Peninsula. It stands behind the chair, and the lift of a lever dispenses chilled beer or pop, one can at a time, onto the arm of the chair. Sold at auction, the beer chair raised several thousand dollars for the charity.

Next, Thompson built a Michigan wine chair, complete with a four-tiered bottle rack and space for wine goblets. It pours a full glass when its lever is pulled.

The chairs might have remained just a couple of quirky items Thompson occasionally made for charity or for his own amusement. But in 2017, he started making Facebook videos that showed off his woodworking projects.

Some picked up a few thousand views, but the specialty chair videos quickly went viral. To date, 10 million people have watched the 27-second beer chair clip, which shows how to load and dispense cans.

The wine chair video, featuring Hollie, really took off. It’s now at 26 million views, and nearly half a million Facebook users have shared it. Thompson’s adult kids – Brooke, 30, Matt, 27, and Casey, 23 – have appeared on screen, too.

While licensing agents have stepped in with offers to help him make money by adding advertising to the videos, that’s not part of the plan. Thompson says he would much rather just see reactions to his work – even the negative ones.

Taking it to the next level

As popular as they’ve become, you probably won’t see the Michigan beer or wine chair sold at your favorite furniture store, either. Thompson says each piece takes hours to make; they just don’t lend themselves to mass production.

He stays busy enough keeping up with the ideas that pop into his head and drive him back to his workbench. Hours of work go into his “Rube Goldberg” style creations, which are focused on mechanizing mundane tasks.

“With each invention, I’ve just tried to take it to the next level,” he says. “It’s always been rewarding just to take some boards and turn it into something. Now, it’s making something someone has never seen before.”

Thompson’s inventions recently caught the attention of the Madison Children’s Museum in Wisconsin. In January, he and son Matt dropped off two that are part of an exhibit called Scratch That, which launched on March 10.

A scalp massager hangs from the top of his Adirondack-style back-scratching lounger, with gear-driven, wooden hands that move up and down in the back rest while spinning rollers massage the soles of your feet. The museum is also displaying both of his Automatic Dog Petters, sized for larger and smaller dogs.

Inspiring the next generation

About six months ago, a group of students from a skilled trades school in Denmark contacted him about making his beer-dispensing chair as their class project. He doesn’t work with computer software and didn’t have drawn plans, so he just sent some general instructions. A video posted to his Facebook page shows the project was a success.

“How cool is that, to inspire kids from another country?” Thompson says.

It’s heady stuff for a guy who started out three decades ago knowing almost nothing about how to use tools. Thompson says that having to learn by doing makes woodworking a great hobby for kids.

“I think it teaches them new ways of doing things,” he says. “I was never trained to do a lot of the stuff I’m doing. It’s problem-solving, just like a puzzle.”

While his own children have not picked up woodworking, Thompson hopes to one day teach his grandchildren how to make their own crazy inventions. He encourages parents who have skills to share them with the next generation.

“There’s nothing wrong with encouraging your kids to be in the skilled trades,” he says. “There’s no shame in working with your hands.”

“It’s like asking about your favorite kid.” Thompson had a hard time choosing, but these five inventions are his favorites.

Try these things to do with your kids in Macomb county while they’re out of school for mid-winter break.
Read more
Outdoors