This unconventional metro Detroit father slings ink as a tattoo artist, screams for a local band – and seriously loves his two sons. 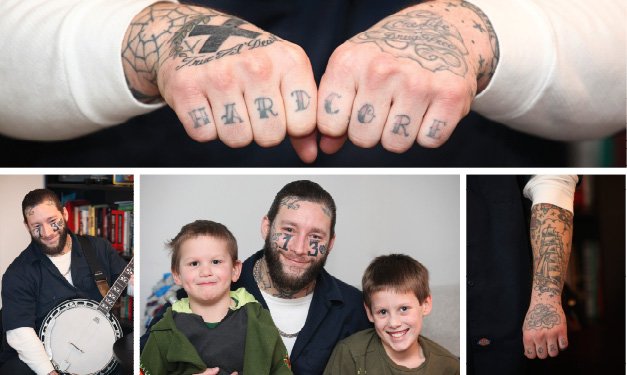 It’s hard to tear your eyes off Dave Haze. The dude’s got a stark, no-apologies mug. Whether the bold numerals under his steel gaze grab you first. Or beard of skulls. Or that blade slicing his stocky neck.

“I have definitely learned to take it with a grain of salt,” Haze says of the stares and questions he constantly draws. Go ahead: Sit down and ask. He’ll candidly tell you anything. That is, unless he’s out for a family meal.

“I don’t really care if it offends,” says Haze, who’s almost 34, of his look. “I’m allowed to have face tattoos and have kids.”

No doubt. Haze – who’s an artist at Eternal Tattoos in Livonia and singer of xTYRANTx (say “Tyrant”), a local hardcore band (think heavy punk) – is a doting dad to two adorable, impish blond boys. And, he estimates, 80 percent of his body is inked.

Regrets? Zero. Really, the word’s not part of his vocabulary.

“I’m one of those people: Even if you’re right, I’m still going to argue with you,” Haze grins. “I’m naturally compelled to be defiant about everything.

“I consider myself a lion,” as he puts it, “And the world is my prey.”

And Haze is one hard-to-box beast. The body art tells much of his story, back to his cub years. Take the bold “X” on his right cheek and the back of his right hand.

It’s a symbol for straightedge – which means he doesn’t drink, smoke or do drugs. Haze discovered the lifestyle at age 12: A buddy’s sister was into hardcore bands that touted it, like Minor Threat and Slapshot. The message instantly resonated.

“You’re not rebelling when you’re doing the same thing your parents did,” was Haze’s reasoning. To this day, he says he’s never touched any of the stuff. “I wanted to be defiant on kind of a different level.”

His first tatt, another hardcore band’s goofy angry baseball logo, was a start. Haze and a pal, then 14, “scrounged up some old tattoo machines. Which didn’t go so well,” he laughs.

But flouting authority came easy. Growing up a middle-class kid in Macomb and Oakland counties, strong-will ran in his veins. “There’s no family dinner without a fistfight,” is a running quip. In school, Haze was trouble. He dropped out in 10th grade.

Tattoos were soon his financial focus. Odd construction jobs helped. But there was another source. The blade and Molotov cocktail above his shoulders are clues.

“At one point, I was a stick-up kid,” Haze says. “I robbed people for money.” He credits his sober edge for dodging police. And his grandfather, who taught him how to sail and shoot pool, was a steady positive influence.

“The reason I’m not dead or in prison,” Haze says, “is because of him.”

Ultimately, though, two big changes happened – illustrated by tall ships on his left forearm. Haze’s then-girlfriend first got pregnant when they were both 25. They’d have another boy a few years later.

“There was a part of me that didn’t want kids,” he admits. “But now that I have them, I take it very serious. It’s one of those things where you can only do it once.

It’s made Haze, in his words, an “over-involved” father: “I know what they’re doing all the time. And I find things for us to do together.”

Whether that’s off-roading, tossing a ball or just hanging out in pj’s. Whatever dad’s working on – pitching a tent, tinkering on his Jeep – the boys are there. He’s even built them a sweet skateboard ramp in their mom’s backyard. The couple recently separated, but they’ve evenly and amiably divided childcare, sans court involvement.

These days, Haze’s weapon of choice is a tattoo gun. Three years after giving it a go, he’s now slinging ink at Eternal up to 60 or 80 hours a week.

“Our walk-in rate is so high – even in the slow season,” he says. “I put in 110 percent of my energy. I want people to feel comfortable, happy with themselves.”

And Haze’s fists pledge allegiance to his first love: HARDCORE is inked across his fingers. For six years now, his band has blared a straightedge – and “American pride” – message. Haze logs about a local dozen shows annually, plus a tour.

“It’s a glorified hobby,” he says. Yet his howling on-stage vocals belie another love: outlaw country. Yeah, Haze can croon, too – and pick a wicked banjo.

So, does he worry about future Haze hellraisers? “I have good kids,” he laughs. But, as his grandmother used to say, “Kids are like dice. Whatever you roll is what you get.”

“There’s no book on it,” Haze explains. “Strap on your boots and get ready.”

“Before, I literally was living life with blinders on. My kids have taught me that life is short – and you better enjoy it right now.”