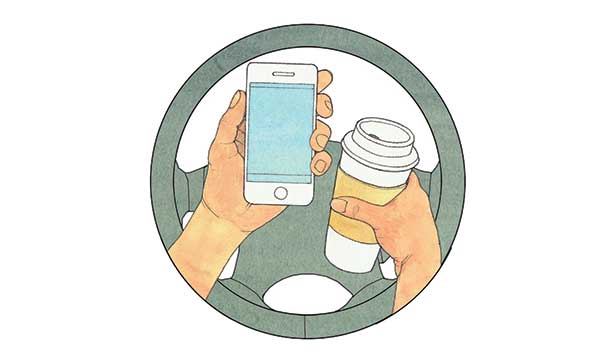 Getting a driver’s license is one of the most exciting milestones in a teen’s life – but it can be downright terrifying for parents. No doubt you’ve done all in your power to teach your teen how to be a safe driver. As they pull away from the house, though, you can’t help but worry.

Since April is Distracted Driving Awareness Month, it’s a good time to revisit some basics. Pam Morse, a driver’s ed trainer at Champion Driving School in Ypsilanti, offers her top three tips to keep your teen safe – and ease your mind.

According to Morse, the most important thing is that your teen stays focused while driving. That means eliminating distractions. And Rule No. 1? No cell phones and no texting! Teach kids to only use their phone when the car is safely parked. If they just can’t resist the urge to check that phone, suggest they put it in the glove box until they get to their destination.

“In the 12 years I have been teaching, you wouldn’t believe the stories I hear – but mom and dad do it!” Morse says. “Kids are throwing their parents under the bus.” In other words, they’re watching you. Parents need to set an example.

Why not commit as a family? For a fun and creative option, sign the Allstate’s “Family Texting Pledge” to not text while driving. You can also join its X the TXT campaign on Facebook.

Other distractions your teen needs to take care of before getting behind the wheel include eating, dressing and doing hair or makeup. Teens also need to limit the number of friends in the car and chill out on the music. Kids, your car is not a mobile rock concert!

Teens can be emotional, hormonal little creatures. There is a lot going on in that developing mind. “You want your teen to have a good driving experience,” Morse says, “so if he or she is angry, sick or tired – they should not be behind the wheel.”

This includes a bad day at school or work, a rough breakup or an exhausting sports practice. A distracted mind creates a distracted driver. Morse suggests your teen takes a break from driving during these times.

Be aware of surroundings

Eyes on the road – it’s that simple. Morse says, “Teens need to keep a safe distance between their car and the other cars on the road. Space between cars is the No. 1 way to eliminate car crashes.” She also says teens need to stay in their own lane and take it easy on turns.

“You wouldn’t believe the number of teen drivers who drive up and over the curb simply because they aren’t paying attention,” says Morse. Being aware and driving defensively also increases reaction time, thus preparing you for other not-so-safe drivers on the road.

Three’s a Crowd: How Modern Motherhood Forgets Parents of Multiples

A local mom of twins discusses her experience raising kids in a world that favors moms of single children.
Read more
Early Education

What's the right time for your young child to start school? Metro Detroit early childhood experts weigh in on when to start kindergarten.
Read more
Guides

30 Fun Things to Do with Kids Before Summer Ends

Try these activities with your children at home or in your neighborhood before schools starts back up.
Read more
At Home

After watching this sequel, try these activities with your family including a talent show, baked treats and dance party.
Read more