Finding a Mommy Match: How to Make Mom Friends

A local mom of two recalls her days of mom dating to meet other moms and fill the isolation when her kids were little. 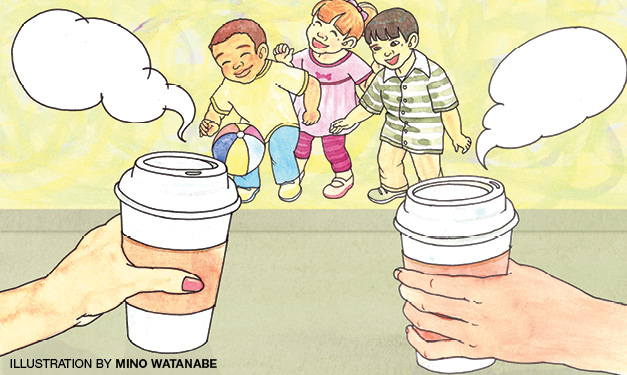 When I was a child, people would use the words “shy” or “quiet” to describe me. I had friends, but I gathered them slowly. Crowds could be overwhelming, new faces intimidating.

Which could be one reason I found dating in my 30s challenging.

Yes, with the birth of my child came the sudden need to meet other moms. Sure, I knew women with children, but most of these women were seasoned, with older kids. I needed new, fresh, scared-I-was-doing-everything-wrong moms. I needed to make sure I didn’t turn into some cabin-fever wacko who thought the wallpaper was talking to me.

My street at the time was bursting with stay-at-home moms, but they all seemed, well, established. I went on Wednesdays to a nursing moms group, but no friendships transcended those meetings. One mom – I’ll call her Kimberly – discovered she lived by me, and suggested we get together. Except whenever Kimberly called to “get together,” she was trying to sell candles or something.

I attended the library’s reading hour, babe in lap, and sang songs. I didn’t do more than make eye contact or nod a “hi” to other moms. How did one butt into a conversation and say “Hi! I need company”?

Someone hinted that a local PTO group organized playgroups. (I kind of wondered how the PTO had an influence on babies and toddlers, but I was desperate enough for companionship that I didn’t question this.) I “got in” with some nice enough moms for a morning playgroup, which consisted of a bunch of moms sitting on the floor in yoga pants among their babies as they talked and periodically changed diapers.

Then we moved from Ohio to Michigan.

Our realtor was “in” enough with our new subdivision to pass along the numbers of some young moms hoping to establish a playgroup.

I got on that. Fast.

I talked to a friendly mom, talked to another friendly mom, and showed up at a stranger’s doorway. Serendipitously, I actually knew this mom, a woman I had played with as a child at my grandparents’ cottage. She introduced me to her neighbor.

This playgroup jelled, morphing and growing as a few other moms joined. We met weekly and provided meals when new babies were born. We forced our husbands to meet one another and play euchre. We waited for our babies and toddlers to actually pay attention to each other.

And waited … and waited.

There was a lot of “side-by-side” play, but no childhood friendships stuck with my kids … until my freezer broke in the summer. Isabella’s mom offered her basement freezer to save my meat and frozen cherries. As I transferred my haul, little Isabella cemented a friendship with my daughter by passing along chocolates she had pilfered from her mommy’s stash.

This nice, safe little sorority of sorts we’d started was great. I’ve experienced these moms having my back in an instant, whether that meant last-minute child care or an impromptu cup of coffee.  (Or, OK, a glass of wine.)

I no longer felt the solitude-driven need for company, but now there was another driver to making some sort of connection. Play dates. The kind where the kids actually want to get together, and not just loll about on the carpeting while their moms drink coffee. Was I supposed to get the ball rolling on those? Based on little more than a smile at a Halloween party and a cold call from the school directory?

In some cases, yes.

Over time, over small chitchat at school events, over the periodical cold call, I’m starting to feel, well, networked with other moms. It’s not the same as those first mom friendships, but it probably means my kids are growing up and making their own new friends. Which I guess is a good thing.

But if I do one day feel that maybe those baby days have gone by too quickly, I know there’s always another mom from my early “dating days” that’s only a call away.