Safety mishaps and breached fire codes can result in more than burnt marshmallows. Check out these outdoor fire pit safety tips to keep your family safe. 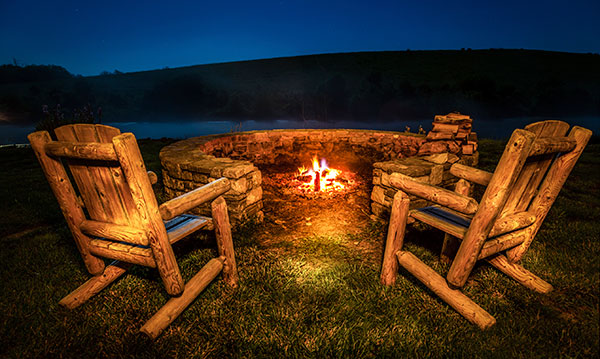 Summer is the season for warm nights spent studying constellations as families immerse themselves in the backyard ambiance only a bonfire can spark. But pause before you begin to toast those marshmallows. From unsupervised children to unchecked embers, keeping fire pit safety in check is critical in preventing a recreational fire from morphing into a disaster.

How can you baptize your backyard in the mood only an outdoor fire pit can provide, yet actively avert the need for damage control? Injuries and out-of-control blazes can be prevented with a few simple precautions around America’s most popular outdoor design feature. To help you keep your family safe, Metro Parent spoke to Rochester Hills’ fire marshal Todd Gary, who gave us the low-down on outdoor fire pit safety.

Many people install or build outdoor, wood-burning pits without realizing that recreational fires are outright prohibited or require a permit in their area. Rochester Hills requires the latter, Gary says. The following safety suggestions and tips apply to Rochester Hills but vary greatly throughout neighborhoods in southeast Michigan. Always consult your local fire ordinances and public safety officials prior to the installation of your own outdoor fire pit.

“Falling into these fire pits is more common than people think,” Gary says.

Backyards can instill a false sense of security, but “there are a lot of injuries from recreational fires in backyards,” he says. “The concern with (unsupervised burning) isn’t typically the fire spreading, it’s the fact someone was burned.”

Vegetation grows back a lot better than flesh.

“Teach (kids) the safety of it. Fire is dangerous, obviously.”

Ironically, the same parents who don’t let their kids operate hot stoves give those same kids pointy sticks to lean over an open flame to brown marshmallows.

Gary emphasizes location is of the utmost importance to preventing mishaps.

Rochester Hills’ fire codes requires all outdoor fires to be ignited at least 15 feet from any combustible structure and overhangs, including trees and overhanging branches he says. Most other cities that allow outdoor pits require at least a 10-foot clearance from any trees, buildings and brush, but the National Fire Protection Association suggests 25 feet. Again, play it safe and consult the fire codes implemented in your neighborhood.

Gary, too, suggests a 3-foot clearance around any pit, cleared of vegetation, particularly brush, sticks and anything else children can trip on.

Fire fiends even often put portable fire pits or bowls on their wooden decks, but he doesn’t recommend this. One stray ember and you may bake before a much larger fire than you bargained for.

Match up and come equipped

Come equipped with loose paper and matches to ignite a fire. Avoid gasoline or any accelerant, Gary advises.

The whoosh an accelerant can produce has been infamously known to take off more than just your eyebrows. A slow and steady crackle wins a tamed burn.

Light up the night without making sparks fly by burning only seasoned, non-pressure treated wood.

“Burning dry, seasoned firewood will keep the smoke down,” he adds.

Gary is not against do-it-yourself outdoor fire pits, provided they’re appropriately constructed, but “I’d really recommend going to some of these home improvement stores that sell (starter) kits.”

Such kits can be bought at Lowe’s, The Home Depot and even Wal-Mart. Pavestone’s RumbleStone kit is quite a popular purchase, too.

“Always use water to extinguish a fire,” he advises, quelling the myth dirt and sand are equal contenders in the fight to cool coals.

Coals continue to smolder after they’re covered with ash, dirt or sand. This proves dangerous with small, pattering feet at play. And sometimes, a lusty gust of wind can reignite embers.

Remember, only you can prevent backyard infernos.