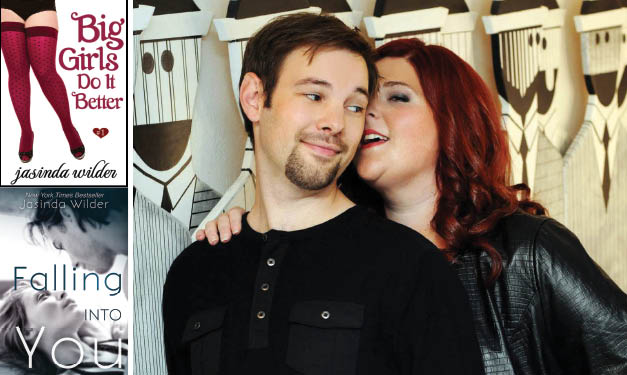 But behind this sexy fiction is a real-life family story. It started with financial disaster – and ended with a local couple literally writing their own success tale.

Jasinda and Jack Wilder, parents of five young kids, were 30 days from losing their Oakland County home to foreclosure in early 2012. “We were pawning stuff to have gas money to visit our kids in the hospital,” Jasinda recalls. “It was that kind of desperation.”

Three months later, they were pulling in $10,000 in a single month by writing and self-publishing romance novels. Within a year, Falling Into You broke into The New York Times’ best-seller list and hit No. 1 on Amazon’s Kindle Books – netting $200K in two weeks.

“Every day I wake up and I can’t believe that we’re doing this,” says Jasinda – who, with Jack, has now churned out 27 books in two years. “It’s really a dream come true.”

Check out Jasinda Wilder’s books, from bestseller Falling Into You and hot Big Girls series to new The Ever Trilogy (the third installment drops on Feb. 14!).

Teachers by trade but passionate about creative arts, the Wilders – who met at a college Bible study and publicly use their pen names – turned to writing as a last-ditch. Jack had finished a grad program but couldn’t find a job. Jasinda was working and caring for their newborn son who had medical challenges.

A neighbor suggested self-publishing. “It seemed too daunting and difficult. I just didn’t think I could do it,” Jasinda says.

But, as things got worse, she changed her mind. First, the pair released a book of poems they’d already penned. Then, they scrambled, Jasinda says, writing 24/7 for almost three months. Glued to their laptops, sacrificing sleep, showers and laundry.

“We never set out to write romance,” Jasinda adds. Their growing fan base of readers actually clued them in to the theme. “I sat down with my husband at a coney island and said, ‘I think we need to just write romance.'”

With Jasinda pounding out stories and Jack handling proofreading and technical writing, the couple looked at each piece they published on Amazon as a “lottery ticket” and hoped one would pay off.

Finally, one did. Many more followed.

“It was just mind-blowing that we were making money,” Jasinda says. “Going from where we were to that is life-changing right in itself.”

It was also a chance to create a leading lady she felt was missing in romance novels: “A woman who wasn’t clumsy and tiny, but hungry and sassy,” she explains. “I could never see myself as the heroine. I tried to write a story that I would want to read, that would appeal to me.” Her hit Big Girls series (Big Girls Do It Wilder, Big Girls Do It Wetter – and so on) was the result.

“The minute we’d publish, they would skyrocket straight up,” says Jasinda. “(Readers) were probably yearning for a lot of the same things that I was, and they just connected with those stories.”

As word spread, including a big TV spot on CBS News, things got a tad awkward at their kids’ school, Jasinda says. “There are just so many questions, which is great,” she says, “but for my kids, we want to try to keep things as normal for them as possible.”

Ages 2-10, their children – whose names the Wilders prefer not print – know “limited, kid-appropriate things about our books,” she says. “But when their teacher ends up being a fan of our writing, and they want our autograph, it becomes a little bit more difficult.”

So, for now, the family recently moved to a farm in northwest Michigan for some “peace and quiet,” as mom puts it – and to write.

With Amazon’s CreateSpace (print) and Kindle Direct Publishing (e-books), they produce a new title every 30-45 days. A nanny helps with the younger tykes while they work four mornings a week, and they carve out family time from after school until bedtime.

“We made huge sacrifices” early on, Jasinda recalls. “A lot of times we literally didn’t sleep.

“Trying to focus on a better life for us and a future – that really was what was motivating.”

And Jasinda’s heard from fans who say her novels helped them feel sexy again after having kids – or even helped save their marriage.

“So many women have so many issues having any kind of libido after they have children,” she says. “They’re starting to feel their self-worth again not just as a mom, but as a woman. That’s so important.”