Failure is an opportunity to realize learn from mistakes. Here's why kids need to careen, and, ultimately, soar. Browse our gallery of famous 'flops,' too. 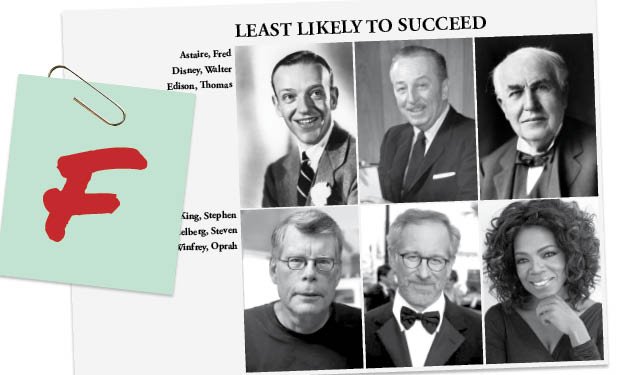 When our two children were in grade school, they were assigned a project for Pioneer Days, a weeklong event for third-graders. The project? To create a replica of a mid-1800s structure such as a log cabin, covered wagon or one-room school house.

I remember strolling through the media center on the day parents were invited to view the fruit of all that labor, most of which had been done at home with Popsicle sticks, cardboard and construction paper.

Since their preference had always been to do things on their own, my kids’ projects looked like, well, third-grade work, kind of sloppy but kind of cute. But some of the others appeared to have been touched by the genius of Frank Lloyd Wright. Either these third graders were already skilled enough to enroll in the Yale School of Architecture, or their parents had helped them – a lot.

I panicked. Should I have helped my kids?

It was hardly the only time I doubted my decision to let our children do things on their own. With rumblings of parents who later had hired tutors to get their kids through algebra and geometry and the ACT, sometimes I succumbed to the pressure and imagined a derelict future for our kids if they didn’t receive the appropriate tutelage. Other times, I felt like a bad parent when I didn’t do anything to help.

The perils of perfection

But it seemed that as a group, we were so busy helping our kids succeed, we were afraid to let them fail. According to Hara Estroff Marano in her 2008 book A Nation of Wimps, “Messing up … is wildly out of style these days. Although error and experimentation are the true mothers of success, parents are taking pains to remove failure from the equation. They are vigilant about positioning their children for success, which is now deemed to run on the straight-and-narrow path of academic achievement, from the earliest age, without what seems like dilatory downtime.”

Is it true? Have parents turned into snowplows, ready to remove any barrier that stands in the way, afraid to let their children fail?

It seems so, say Barb McDowell and Norma Macklin, retired elementary school teachers who taught in Macomb County for over 40 years. They started to notice a change in parents in the 1990s.

“It’s scarier for parents today,” says McDowell, who admits well-intentioned parents want their children to be able to stack up in a global economy. The pressure starts early.

“Kindergarten is no longer for socialization. Kindergartners are expected to learn how to read and do simple math,” Macklin says. As children get older, the competition intensifies. “Many parents feel, ‘My kid needs to be the best. If my child has a problem, we have to fix this.’ With the Internet and email, parents sometimes ask about an assignment before there is time to grade it.”

Online tools that let parents check their children’s grades and homework assignments such as Power School and Zangle – which Marano believes feed into parental obsessiveness over grades – have their positives, Macklin says, but can take ownership away from the child.

“Kids may think, ‘If there is some way Mom or Dad will find out about the homework assignment, then I’ll sit back and wait to hear about it before I do anything on my own.’ At what point does the child finally say, ‘All the positives and negatives are on me, and I can do it on my own’?”

Claudia Walter, a licensed social worker from Novi with two children, says Zangle created a lot conflict at home. “In the beginning, I’d be going crazy. One day I’d see an ‘A,’ the next day an ‘E.'” Her kids convinced her that an “E” can show up if the teacher adds an assignment but not the grade; they also thought Walter was “creeping” on them when they were in school. “I had to back off. It wasn’t helping.”

Walter and her husband finally put the responsibility back on their kids. “We said, ‘This is your tool. We won’t go on it unless you give us a reason to.’ I might have checked if a whole week went by and I didn’t see any homework, but it is way too subjective of a tool to look at every day.”

Sometimes, parents are forced to hand responsibility over to their kids – a position Birmingham mom Kristin MacKay found herself in. A self-confessed control freak, she had micromanaged her son’s homework all the way through sixth grade.

Though her son was extremely bright, he was easily distracted and had struggled with organization in school. A teacher friend suggested he might do well in a different environment, one that catered to like-minded children. After checking out a school close to her home, Kristen agreed to enroll him – even though she was told by school staff she had to “let go.”

“They said, ‘That’s our philosophy here. They’re going sink or they’re going swim, but they’re going do it on their own.'” To her surprise, her son took responsibility for his own work and thrived in the new school with little oversight by his mom. He later told her, “Mom, I found my place.”

It’s an outcome that wouldn’t surprise Royal Oak writer and mother Cindy La Ferle. Before her son graduated from high school in 2004, “We did a lot of the proverbial ‘throw a kid in the pool and let him learn how to swim’ stuff,” says La Ferle, who is also a product of the sink-or-swim approach. “We told our son, ‘You can go out and try new things, but if it doesn’t work out, you are the one who succeeded or the one who failed.'”

But what happens when a kid sinks?

Walter, the social worker, says, “We learn to succeed as human beings by failing. If you’ve never failed because someone’s buffered your fall, then the essential problem-solving skill you need for academics, jobs and relationships isn’t being developed. We learn lessons through mistakes and continue to do so as adults.”

So why are we so afraid to let our kids fail? Walter says it’s because our self-esteem comes from our kids doing well – “from Johnny going to Harvard.”

La Ferle agrees. “We take personally the things that happen to our kids, and if our kids succeed, we are successful parents. If they fail, it’s a bad reflection on us. If we can get over that, then that’s good. Sometimes we need to step back and not use our kids as trophies.”

From his perch as a counselor at Birmingham Seaholm High School, Walt Romano has a bird’s eye view on the pressure to get into the “right” college.

“Today, you can’t fail!” he says. “Parents are making sure their kids have every opportunity to get into college. Kids have to ‘be’ something, whether it’s captain of a sports team or community service volunteer or to have that great ACT score and GPA.”

Romano says that some parents contact colleges directly to notify them of their child’s “big accomplishment,” but the schools don’t want to hear from the counselors or parents. “It’s way more important for the kid to contact the school, because it says something about them.”

Parents also seem to think certain schools will set their kids up for success while others will set them up for failure.

“But they really don’t. I have students who will say, ‘I have to get into U of M’ – and then I find out they want to be a teacher. Well, there are so many good schools of education in Michigan – Central, Western, MSU – you don’t have to go to U of M to be a teacher. When you get out, what really counts is who you are as a teacher and a person, not what school is on your diploma.”

When Romano speaks with students one-on-one about their strengths and weaknesses, they seem relieved. “We ask them: ‘Where do you want to go, what have you done in the past that you’ve been good at, and let’s see how you can turn that into a nice career for yourself. It isn’t all about your grades or ACT scores.’ That really opens up a lot of eyes.”

Kids get their cues from their parents, Romano continues, and if parents can calm down and relax, it will help the kids. “If a kid is struggling, have the appropriate conversation, but don’t freak out. If kids have a good solid foundation, they know they will be OK.”

Meet 11 famous folks who changed the face of pop culture, science and more in the photo gallery below.

Here are some extras to consider for first-time overnight campers.
Read more
Outdoors