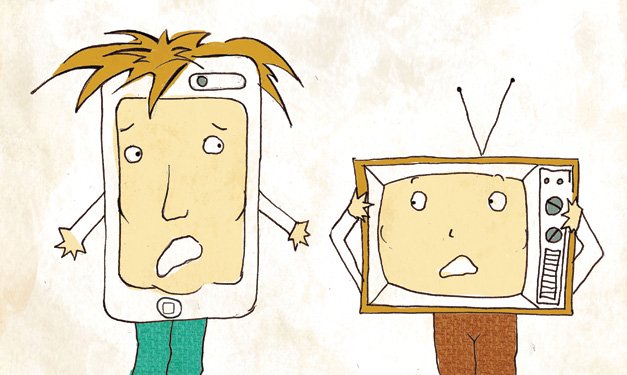 In 1974, Shel Silverstein wrote a playful yet cautionary tale of too much media consumption in the poem, “Jimmy Jet and His TV Set.” The poem, which was published in his beloved book of children’s poems called Where the Sidewalk Ends, details a boy who watches so much TV that he ends up transformed into a television, complete with antennae ears and a cord for a tail. Fast forward almost 40 years later, with kids practically mind-melding with an array of digital devices, and the poem seems positively prophetic if a little passé.

And yet as vivid as Shel Silverstein’s imagination was, he couldn’t possibly have pictured a time when kids around Jimmy’s age (6-11) were watching an average of 28 hours a week of TV. Worse, according to a 2009 study by The Nielsen Company, children ages 2-5 are consuming an average of more than 32 hours weekly “boob tube” time. In general, the study found, TV viewing among American children ages 2-11 is at an eight-year high.

“Parents today have an unprecedented convergence of unfettered, unregulated commercialism and ubiquitous miniaturized screen time,” says Susan Linn, Ed.D., director of the Campaign for a Commercial-Free Childhood and a psychiatry instructor at Harvard Medical School.

Little Jimmy and all the kids who grew up in the 70s, 80s and even the 90s had much more limited access to television time. They had to be in the right place (in front of a stationary TV) at the right time (8 p.m. sharp for their favorite show). But now, kids consume television on hand-held devices and tablets and on tiny TVs mounted in the family car. TV is no longer cumbersome. Couple that with the fact that there are more forms of screen time – from texts to apps to video games – and the result is a generation of kids getting more and more screen time.

At the same time, medical experts and researchers like Linn, have been consistent for decades in their cautions about limiting kids’ screen consumption, citing studies that show excess screen time can cause a range of cognitive and physical issues for kids, such as a shorter attention span and an increased risk of obesity. And yet, here we are: health professionals and parents in a deadlock. One issuing annual warning bells about an ever-growing issue for kids and the other seemingly ignoring the alarm as the stakes get higher and higher.

The stakes collide with reality

Study after study for decades have been largely consistent when it comes to excessive screen time and kids. Excessive screen time is associated with an increased risk of childhood obesity, lower grades, poor sleep and behavior problems, says Kyla Boyse, a nurse and editor of the Your Child website and Your Child podcast at the University of Michigan Health System.

For children under age 2, the effects are particularly profound. According to the American Academy of Pediatrics, screen time in babies and toddlers can impair cognitive development at an all-important time for brain development.

Studies have found that children under age 2 glean little educational benefit from watching TV, even from programs labeled as educational, and time spent in front of the television can mean less time they’ll have engaging in activities and interacting with people, which, according to the AAP, is what most efficiently helps toddlers grow and develop.

For years, this finding caused the Academy to call for no television whatsoever for children under age 2. Yet, research shows that 47 percent of babies age 1 or younger watch TV and videos an average of two hours a day. Last fall, the group tempered its recommendations a tad, instead recommending parents severely limit TV time for kids under age 2 if not abstaining entirely.

Why? Were the predicted outcomes of TV time for babies and toddlers less damaging than the Academy once thought?

Nope. It was just surrendering to the times we live in.

“The Academy took a lot of flak … from parents, from industry, and even from pediatricians asking, ‘What planet do you live on?'” Dr. Ari Brown, an Austin, Texas pediatrician who was the lead author of the updated policy, which was published in the October 2011 issue of Pediatrics, told NPR last fall. “The recommendations are an attempt to be more realistic, given that, between TVs, computers, iPads and smartphones, households may have 10 or more screens.”

The Academy also offered tips on helping to make media consumption more valuable for kids of all ages, recommending that parents choose the programs that their children watch wisely and use that viewing as a jumping off point for conversation on the content viewed. The goal is to meet parents part-way, acknowledging that screens are here and plentiful but advising parents against allowing their children unfettered access. That means not letting them have one in their bedrooms.

Doing your best in today’s world

“Screens are everywhere – home, work, doctor’s offices, restaurants, even in the minivans they have DVD players to keep the kids quiet. Really, it’s almost like a pacifier for our generation. We are always on the go 24/7 … how do we relax? It’s become a habit that is very hard to break,” says Chava Bachle-Docks, an Oak Park mother of Yaakov, 18, Shlomo, 10, and Sarah, 6.

Indeed, research shows that screen time is habituating. More watching as a kid means it may be harder not to watch as they get older, says Linn.

“Parents don’t know about the harms of screen time and also, it looks like fun, it’s convenient, it keeps kids quiet,” says Linn. “A lot of parents are also hooked on screens. We’re not asking people to give up communicating through screens, Kindles or working. The problem with screens is they’re habit-forming, they are the primary way marketers reach children and track children online.”

“It’s never been harder to be a parent than it is today,” says Linn, “because the culture is toxic. We have this commercialized culture that has really taken over children’s lives and which is filled with messages that actually undermine most of the value that most parents want to instill in their kids, including the value of consumption and the notion that the things we buy will make us happy.”

Melissa Fradenburg of Grosse Pointe Farms only allows her kids, Jackie, 3½, and JP, 2, to watch age-appropriate shows that she records on DVR from Disney Jr., Nick Jr. or PBS.

“I’m always concerned my kids watch too much TV and always trying to limit it,” says Fradenburg.

They watch an hour in the morning, a half hour before naptime and another hour before dinner.

“That sounds so terrible to me, but I don’t feel so guilty because in between we’re playing outside, having playdates with friends or on an adventure at the zoo,” she says. “One of the ways I’ve found to cut back is to turn on music instead. I will say that my kids play with toys and interact with each other while watching. If they just sat and stared, I would be more concerned. I also let them watch on my iPhone or play games on the shopping cart or at the doctor’s office.”

Fradenburg says it’s hard to cut out TV because it’s a way that she can get a much-needed break. “Any parent with two preschoolers, 18 months apart, would tell you it makes for a long day,” she says. “My husband works long hours and we have no family in Michigan to help.”

Still, parents don’t have to surrender to the screen. They, like Bachle-Docks and Fradenburg, can find a balance that works for their family.

U-M Nurse Boyse, who lives in Ann Arbor, has three kids of her own who don’t watch much TV.

“It’s in a cabinet with doors that close, which makes the TV recede into the background,” says Boyse. “It makes it easier to not turn it on.”

When the Boyse clan does flip on the tube, they prefer documentaries, history and dinosaur flicks – all of which they watch as a family and discuss as a family.

When kids are focused on a screen, they’re not focused on relating to others or creative play – two foundational building blocks for children, says Linn. That’s what the APA is hoping more parents will augment TV watching with engagement. Key to that is picking programming that can elicit thoughtful conversation.

Even President Barack Obama and First Lady Michelle Obama have weighed in on how they scale back their daughters’ screen time. Pres. Obama reported that they do not allow their daughters to watch TV or use the computer, unless it’s for homework, during the school week. Limiting when a child can watch TV is another big way parents can set parameters.

Bachle-Docks says she’s careful about what she lets her kids do in front of screens. They can’t “surf the web,” she says. “I usually try to enforce the rule, one half hour and then break to do a physical or creative activity.” In the summer, Bachle-Docks says it’s not really an issue because they spend a lot of time outdoors.

“I find that something changes in the kids if they spend too much time in front of the TV or computer screen. It may sound strange, but they become agitated and cranky,” she says. “Maybe it’s true what our parents said about the TV/computer turning our brains to mush.”

“I believe it’s a cultural, societal addiction,” says Carol Rohtbart, a Bloomfield Hills mom to Max, 20. “I know when I spend too much time in front of the computer, I feel like a zombie.”

When her son was younger, Rohtbart sent him to the Oakland Steiner School, where many families did not have TVs. She was comforted by this because she saw early on that the bright pictures of the television were a problem for her son.

“For parents, it’s hard to keep your kids busy. TV becomes like a babysitter. I fell into that too,” she says. Since her son’s father was “a TV addict,” Rohtbart didn’t regulate their child’s TV time as much as she would’ve liked. “Both parents need to be on the same page,” she says.

“It’s worth fighting over,” she adds. “The older I get, the more I see how important it is. I believe we are disconnected to ourselves, from each other and from nature, and too much screen time has so, so much to do with that.”