The Greatest Gifts Parents Can Give Kids

They don't come under a tree but they keep giving after the holidays. Here are some of the greatest gifts parents can give kids. 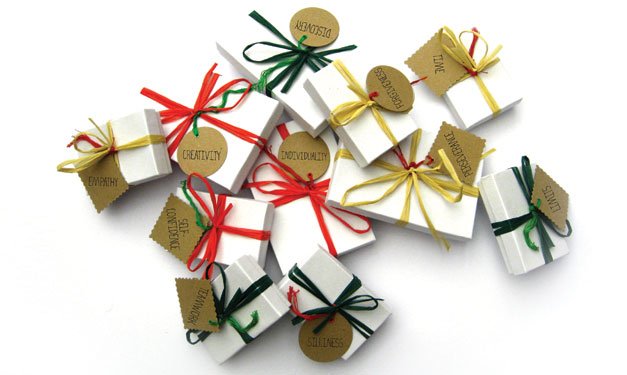 If you have a tighter budget this year for gift-giving, you might be disappointed that you can’t afford to get your daughter that laptop she’s been wanting – or that your son will just have to wait on the electric guitar.

But before you feel bad that oversized, carefully wrapped presents won’t be brimming under your Christmas tree, take time to think about all the gifts that you can give your children that don’t come in neatly wrapped packages.

The best non-material gifts for kids are those that teach them to appreciate more than just those material items. They’re the gifts only parents can give – and the kind that kids are the most happy to receive.

1. The gift of self-confidence

If a child learns early in life that he is capable, he’s less likely to struggle with insecurity and self-doubt as he gets older, explains Kathryn Gleason, a licensed marriage and family therapist.

“If a child doesn’t have a clear sense of self, he or she is going to struggle with identity issues later in life, especially in the teen years.”

Her advice: Praise your child’s efforts to build confidence instead of his results. For example, if he’s drawing a picture, compliment him on how he’s putting his picture together, the colors he uses and the textures he creates.

2. The gift of empathy

Compassion and empathy are closely tied, Gleason says. If a child learns to really understand someone else’s point of view, she’s more likely to feel compassion toward that person.

Gleason tried to teach this important lesson to her own son by modeling it. Although she says her son is a natural when it comes to feeling compassion toward others, she says there are also some ways she can help promote those caring thoughts.

For parents with young children, she says you should work at your child’s level and mimic their actions every once in a while. If your toddler is stacking blocks on the floor, join him on the carpet and make your own stack.

By showing your child that you are interested in what he’s doing, he will be more likely to take the same care to understand others, too.

3. The gift of creativity

Few toilet paper rolls make it into the trash at our house. Instead, I have a pile of odds and ends that I give my children to use in making “projects.”

There was no Barbie Dream House in my kid’s room, but she did have a Littlest Pet Shop mansion of sorts, that she constructed using Kleenex cartons, Eggo Waffle boxes, paper towel rolls and nearly a hundred paper clips (for the elevator).

Instead of throwing out what may look to others like trash (i.e. her creation), I praised my daughter’s creative zeal.

4. The gift of perseverance

Of all the lessons her parents taught her, Gleason says the one she treasures the most is perseverance.

“I have a belief that I can always come out on top. Even if there’s something difficult, I know I can get through it.” Gleason recalls her father sitting down with her “side by side” when she practiced piano as a 7-year-old. “If I couldn’t get the rhythm right, he’d sit with me and help until I could.”

Whether she was involved in sports, school or developing a talent, Gleason says her parents encouraged her to try new things.

“If I hit a wall, one of (my parents) was always there to keep encouraging me,” explains Gleason, who says this can-do attitude has carried over into her work as a therapist. “When I see people struggling, I have this sense of hope, that we can work together to help them overcome their problems.”

5. A gift of discovery

Mel Drumm, the president and executive director of the Ann Arbor Hands-On Museum, says he may have been a born scientist, but that love of learning may not have been cultivated if his parents hadn’t urged him on.

He recalls how trips to the pond or walks became an exercise in observation – and discovery. Drumm’s parents would ask him what he thought was happening beneath the surface of the pond.

“Their goal was you don’t have to understand it all now, but you should ask questions of what you see around you. Look. Observe. They encouraged me to embrace the wonderful world around me – and explore it.”

6. The gift of forgiveness

Not just of other people, but of yourself. ”

We learn from our mistakes,” says Gleason. She says parents help their children when they explain, “It’s OK if it didn’t work this time. Let’s try again,” and “you shouldn’t beat yourself up about it.”

7. The gift of silliness

Once, during an afternoon at the Ann Arbor Hands-On Museum, Drumm observed a mother and a 3-year-old testing out one of the exhibits.

The exhibit contains an infrared camera that detects heat (especially from the body) and displays it in projected, color images.

One mother went on her back on the carpet and vigorously swayed her arms and legs – to the squeals and giggles of her 3-year-old. When she got up, the floor had warmed up, so that the display showed a glowing “carpet” angel, not unlike a snow angel you might make outside.

The 3-year-old followed in his mother’s example and created his own carpet angel, while his mother looked on and laughed with him.

“I could tell how much fun they were having with each other,” says Drumm.

8. The gift of teamwork

Through joining neighborhood sports teams – and even playing a pick-up basketball game together in your driveway – children learn the importance of teamwork.

“From working with a team, kids learn determination, cooperation and responsibility,” says Josh Landefeld, the former regional director of youth sports for YMCA of Metro Detroit.

9. The gift of limits

Without rules, children become confused and even frustrated. Even though your children may grumble, deep down, house rules keep them grounded.

“Having limits gives children a sense of balance,” explains Gleason. “They know how far they can go. Without limits, they become anxious, because they don’t have a clear sense of boundaries.”

10. The gift of individuality

Gleason encourages her son to develop his own interests and abilities – not just follow those of his parents.

“I want him to figure out what he likes,” says Gleason, who gives food as an example. “When we’re eating food that’s spicy, I explain that mom likes it sort of hot, dad likes it really hot stuff, but you might like things that aren’t spicy at all. ‘That’s your choice,’ I tell him.”

She says the lesson also helps teach him tolerance of other people’s differences.

Of all the gifts parents can give their children, each expert agreed that the greatest gift is time – uninterrupted, focused, one-on-one time with mom or dad, or both.

“I always felt like I was important to my parents,” recalls Drumm. “And because I knew they cared, I felt like I could reach beyond what I thought I could do, and with hard work and discipline, I could accomplish anything.”

If you’re still debating about whether to buy your child a pricey gift, save yourself some money – and spend more time with your kids instead this holiday season. That will be their favorite gift of all!

What did you think of these “gift” ideas? Will you try them out with your kids this Christmas season and beyond? Comment and share your thoughts.