How to Get Kids to Stop Swearing

Is your kid's swearing becoming an issue? If your child uses foul language, here's some advice from local parents on how to stop it. 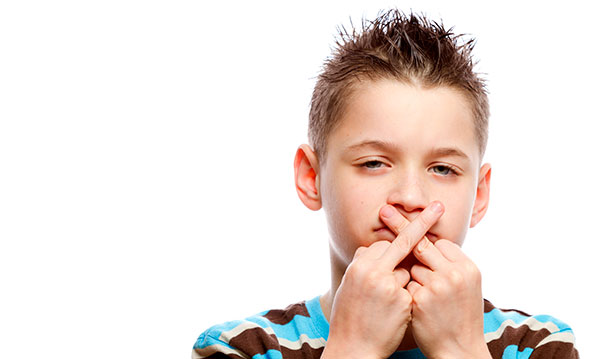 Over the Thanksgiving holiday, I was discussing this article with several family members we were visiting out of town. The mother, Johanna, told me her son had repeatedly yelled an inappropriate phrase throughout his preschool soccer game. She was mortified while the other parents found it comical. She had the coach take him out immediately so she could deal with the situation. To clean up her son’s trashy talk, she got out a bar of soap. When he continued to sling the nasty words, she found something that would work: Liquid soap.

While I have yet to experience foul language from any of my children, I am savoring the advice of those who have had to deal with it and what they have done to clean up their kids’ potty mouths. Local moms have some tips for avoiding the problem from the beginning, while others share their stories of nipping it in the bud.

Canton mom Jessika Whiteside says she and her husband were shocked when her son, then 3 years old, uttered his first unfavorable phrase.

“I stifled a laugh as my husband, horrified, wanted to know where he learned that,” she says. Turns out, her husband was saying it regularly and just didn’t realize it.

Harrison Township mom Diana Ashley says in her house, they don’t set the kids up to fail. Instead, they have strict rules about what they can say from a young age. All of the members of her family – even she and her husband – have to obey the rules.

“We don’t allow ‘tamer’ words like stupid, heck, etc. With them, I usually tell them an acceptable substitute. For example, we say ‘what in the world?’ instead of ‘what the heck,'” says Ashley, who has four children. She and her husband applaud the appropriate responses, encouraging her kids to choose the best words in order to be acknowledged and praised – something kids want more than anything.

Clinton Township resident Alicia Schaffer says she was taught that any word could be a swear word if used in a derogatory way. She takes that approach when teaching her three sons.

“My husband and I are careful to say that they are ‘adult words’ not ‘bad words.’ When they have gotten older, we have asked them if they know what the words means and also what other, more appropriate words, they could use,” Schaffer says.

Monroe resident Alison Beeker decided to give her children the power when it comes to choosing their words.

“They choose not to talk like that and to find better ways to express themselves. I think, though, that giving them that power makes them feel mature and they want to use better language because of it,” says Beeker. She says as a youngster, she was given the opportunity to swear but never wanted to.

Harrison Township mom Jennifer Ross says she set the rule with her son that he couldn’t swear in front of girls and she told her daughter that it’s unbecoming of a girl to swear.

“My daughter is almost 20 and she won’t swear,” Ross says. Her son, now 18, doesn’t swear in front of his mom, and keeps his language clean most of the time.

“As they get older, they see the friends at school who do swear, and that makes them not want to more than what I can say to them,” says Hardies.

Clinton Township mom Doris Briggs says her son hates the taste of soap, so it has become the go-to punishment.

“He thinks twice about what he is going to say. He knows what he is doing because he will say a word and looks right at me to see my reaction,” says Briggs.

Soap seems to be the popular method for discouraging the bad words, but Shaffer says she has found some other alternatives.

“We have used some hot sauce. Not a ton, mind you, about a pea size amount. Capsaicin will make their tongues hot, but it doesn’t hurt them, whereas soap can actually poison their bodies. You have to be careful about what soaps you use,” Shaffer says.

Ashley has taken a different approach, especially with her older children.

“With my older guys, we’ve told them that if they use inappropriate words, they will lose privileges of watching movies or TV that may have some bad language because they have shown they can’t handle hearing it and not repeating it. Thus far, this has worked,” Ashley says.

Have any other tips to share? Tell us in the comments section below.