How to Ride a Bike

Discover the three important things you should know to help your kids say goodbye to training wheels. 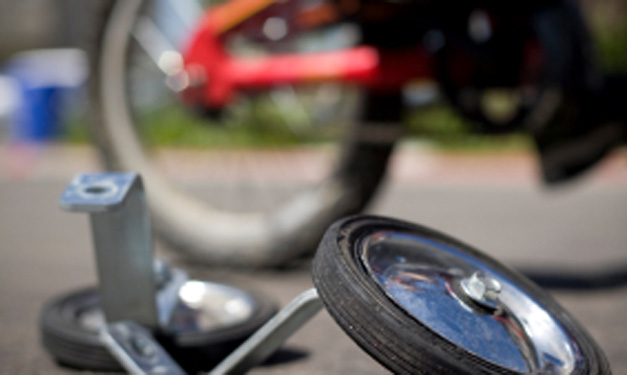 Brian Goocher has fond memories of his first set of wheels. It was a brand-new Schwinn Lil Tiger with a banana seat – a pretty sweet ride. In fact, Goocher spent so much time on it, the paint job went from a bright, shiny red to scratched. “It probably had 100,000 miles on it by the time I outgrew it,” says Goocher, owner of Jack’s Bicycle and Fitness in Dearborn.

Now a father of two, Goocher has passed on his love of bikes and the outdoors to his own kids, Nathan and Marina. They have bike-riding in their blood: By the time they were 4, both were on two-wheelers – sans training wheels. Goocher says kids should learn this skill by the time they’re 5 or 6. This dad offers his three steps to helping your kids go training-wheel free, too.

1. Start with a smaller bike. The best way to teach a child how to navigate a two-wheeler is on a bike that’s slightly too small for him to ride, says Goocher. Put the seat down low, and take off the pedals on both sides. This way, your kid can sit on the seat while still able to have his feet touch the ground. You want your child to have a slight bend to his knees.

At this point, says Goocher, your child can use the bike like a scooter and push himself around in order to get accustomed to how the bike glides and steers. If he runs into trouble, your child can easily and safely put his feet back on the ground.

2. Tell them to look ahead. Once your child is comfortable turning the bike, put the pedals back on. Before take off, however, be sure to offer this tried-and-true dad advice: “Look toward the horizon to ride straight.” Many kids have a tendency to look at the ground when learning, which can be a recipe for failure.

3. Be a parent protector, not propeller. While standing behind your child, let him attempt to ride the bike. As he practices, you can run behind him in case of a fall, but Goocher says parents should resist the temptation to actually hold on to the seat, handlebars or any other part. “Most of the time, parents are going to knock the kid off the bike,” says Goocher. Although there inevitably may be a few spills during the learning process, young kids are much better coordinated than adults.