How to Teach Kids Funeral Etiquette

Here, local funeral directors weigh in on funeral manners, when it’s best to talk to your child about death and more. 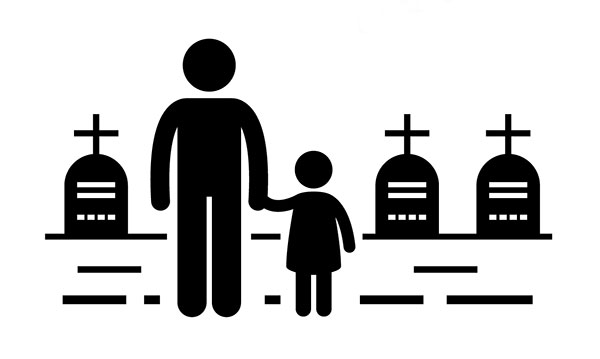 David Techner was nine when his grandfather died. His parents regrettably waited until after the funeral to tell him. Since then, Techner has always felt deprived of the chance to say goodbye to his beloved grandfather.

“I decided that wasn’t going to happen to anyone else,” says Techner, a well-known national expert on helping kids understand death, the funeral director of the Ira Kaufman Chapel in Southfield, and author of the children’s book A Candle for Grandpa.

Should children attend a funeral?

Funeral home directors are frequently asked if children should be brought to a funeral, visitation or cemetery. The answer is almost always yes.

“Children, even at a very early age, have an awareness of death and a response to death and they should be given the option to attend the visitation, service or both,” says John Desmond, funeral director at A.J. Desmond & Sons in Troy.

Dr. John Canine, an author, psychologist and nationally known expert on grief counseling in Clarkston, also encourages families to include, but not force, children to attend a funeral and/or visitation. He states that there are many benefits for both children and adults to grieve with family and friends.

“More positivity comes from taking a child and allowing him to be a part of the process than having him stay at home,” says Canine. When his father died, his sons, then 14, 12 and 7, stood by his side and watched him laugh and cry as mourners paid their respects and shared stories and memories. “There is strength in collective grief,” he adds.

Parents can get additional tips on helping kids cope with death here.

When to talk about death

Experts can’t pick a number and tell parents “this is the right age” but they do know that typically after the age of seven a child is able to conceptualize the finality of death according to Desmond.

Techner says that instead of age, the focus could be on the child’s relationship with the deceased. More specifically, how much will that child’s life be impacted by the absence of that individual?

Because seeing is believing, attending a funeral and visiting a cemetery helps a child realize that a loved one has died, according to Canine. Being at the funeral or cemetery is more concrete evidence than just a statement that “Uncle Jack died.”

Kids have a natural curiosity about death and although parents may be hesitant to bring this topic to the forefront, children need to understand that death is a part of life.

Talking to kids about death and taking them to a funeral doesn’t have to be uncomfortable. Consider the following information and advice when addressing the topic:

Desmond says it’s best when children, through their early teens, come to visitation for a short time but only because the social aspects of visitation can make supervision difficult.

Books are another great way to help children cope. Check out our list of books for children and families dealing with grief.