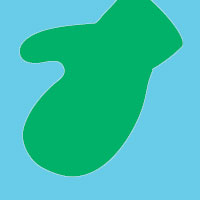 When I was a kid, Bill Cosby had a comedy routine about something he called "Dummy Mittens." OK – in today’s sensitive society, adults aren’t supposed to use that particular "D" word. But hear me out.

He would talk about the poor little kid who had to wear mittens, probably knitted by his mother or grandma, that had a looong string attaching one mitten to the other. The string would go through the child’s coat sleeves and the two mittens would dangle out of the armholes. The child would always know where his mittens were!

Cosby’s laugh line was that kids would make fun of children who wore them – or that they might pull one mitten out hard, forcing the child to slap himself with the other mitten. It creates a funny, if politically incorrect, image.

But one thing is for sure. A mom invented those mittens!

I know that no matter how many perfectly clean and well-matched pairs of mittens we have at the beginning of each winter, come February, my little darlings will be building snowmen with a crazy array of ghastly, mismatched gloves that shame me to the core.

Of course I shouldn’t feel embarrassed. It’s not my fault.

At least with socks, our kids generally put them on in the house and take them off here as well. That is my domain. But mittens are removed everywhere and never put on again. Or one is in Patti’s desk at school and the other is in the car.

I swear, I started off in October with about six pairs of mittens in our little winter accessory bin, and already it’s nearly impossible to find two that match!

"Where are your mittens?" I ask Suzi during breakfast.

"At school," she responds, as if I am slow-witted.

"Well, how are you going to keep your hands warm when you walk to school?" I ask.

My husband Bill does not share my concern for mittens. Since he never wears gloves himself, he has a simple answer. "Put your hands in your pockets!"

That childcare philosophy brought him some embarrassment, once. He took the girls to the Rochester Holiday Parade a few years ago, and failed to bring any mittens at all. He told 4-year-old Suzi to put her hands in her pocket, he said later in his defense, but she was too busy dancing to the holiday music and needed her hands free in order to express herself. Bill began to notice disapproving glares from women nearby, and finally someone went into a shop and bought three-pack of mittens for Suzi, which Bill sheepishly accepted.

It certainly "takes a village" when dads are in charge. But I digress.

I say it is time to bring back Dummy Mittens, if you’ll forgive the expression. Maybe that was the problem all along. Bill Cosby made them too embarrassing to wear, because his moniker stuck. We need a new marketing plan. We could call them "Loss Prevention Mittens," or "Fittin’ Mittens," or "Saved by a Thread Mittens."

I guess I’ll just keep buying the cheapo mittens by the three-pair-pack and continue to wonder – whatever becomes of all those lost mittens?