Imaginary Friends: The Benefits of Your Kid’s Scapegoat, Confidant and Alter Ego

By and large, pretend pals can be a means to help children explore boundaries, new situations and more. Here's how they're useful and what parents can do about them. 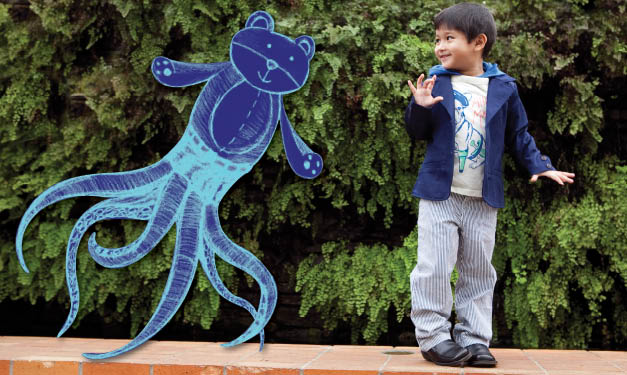 My 4-year-old daughter has a roster of imaginary characters she calls upon whenever she needs a friend or two. There’s Lily, Meadow, twins Martha and Tartha, and a boy, Nick, who perished in quicksand but still appears from time to time.

Sally is very loyal, always by Violet’s side. But she’s a bad, bad girl. She uses her outside voice in the house and sometimes won’t share. She’s been known to peel bindings off board books and draw on the walls.

My son’s imaginary companion took an even darker turn. Soon after we moved into a new house, when Verick was 4 years old, he began describing a “shadow guy” who rose from the carpet and wheeled around the house on a unicycle trying to steal our dreams. Creepy, right?

One day, Verick strapped on an imaginary backpack, hunted the guy down and ghostbusted him. He later reappeared as a friend, not foe.

I’ve come to wonder if the shadow guy helped Verick deal with his anxiety over moving and to express his fears about our new house. And Sally – who bears a suspicious resemblance to my daughter (pink boots, princess gloves and all) – is obviously a scapegoat for Violet’s bad behavior.

I asked around to see if any of my friends have imaginary playmates in their homes.

Turns out Detroit-area mom Megan Pennefather’s 4-year-old, Luke, has an imaginary baby and child, both named Luke after himself.

“I would sit on the couch and he would freak out, ‘My kid is sitting there,'” Pennefather says.

Wendie DeLano, a mother of two in Livonia, says her daughter Lilly has an imaginary older sister named Emily. “She has a lot of birthdays that we need to celebrate. Always when Lilly wants cake,” DeLano says.

“I am not sure why, because she had real friends at preschool and two younger sisters,” McDonald says.

I think I have insight into why my children concocted their invisible companions, but what I don’t know is, should I worry?

According to imagination expert Marjorie Taylor, author of Imaginary Companions and the Children Who Create Them, pretend pals are quite common, especially among the preschool set. In fact, her research shows two-thirds of children have an imaginary friend by age 7.

Taylor runs the Imagination Lab at the University of Oregon, which researches the development of imagination in children. In particular, the lab is interested in the creation of imaginary companions and the role they play in social and cognitive development.

In her interviews with children, Taylor has met imaginary friends in many forms – animals of various species, an insect, a puffball, a sparkly flying dolphin and even a 160-year-old businessman.

“They can dance, they can fly, they have super powers. Some are extremely obedient, others are obnoxious, with difficult characteristics like swearing, messing up your room, putting yogurt in your hair,” Taylor says. “It really gives you an appreciation of a child’s creativity.”

Taylor first became interested in imaginary friends when her own daughter brought home stories about a boy named Michael Rose.

“I thought he was someone at the day care. I wanted to find out who this person was and I asked around,” Taylor says. “I found out that he had a barnful of giraffes.”

Taylor quickly realized Michael Rose wasn’t real, but wondered if her daughter really believed in him.

“Somewhere in the interview they would want to clarify things: ‘You know it’s just make believe.’ It was almost like they wanted to make sure we weren’t getting confused about it,” Taylor says.

According to Taylor, there are many reasons children concoct invisible friends.

“They are very useful entities,” Taylor says. “It’s a way to sort of mull over the things going on in their lives.”

If there’s a bully at school, a child might create an imaginary friend she can reprimand at home. If someone the child loves is sick, he might break out the toy doctor kit for his invisible patient.

Imaginary friends may be used as a bargaining chip or scapegoat, as in “Sally doesn’t go to bed until 9 p.m.,” or “She spilled it, not me.”

They can also change over time and become more elaborate.

“When you’re playing pretend, you can do whatever you want,” Taylor says.

Imaginary friends often get a bad rap. Who can forget Tony in The Shining, who lived in Danny Torrance’s mouth and eventually possessed his mind (think REDRUM)? Sigmund Freud claimed imaginary companions were a means by which children compensated for an unhappy, disturbed or lonely childhood. Even today, imaginary friends are described on Wikipedia as a “psychological and social disorder.”

In the past, a child with an imaginary companion might have been considered peculiar, shy or even troubled, Taylor says, but modern research shows the reality is much more positive – and interesting.

One common misconception is that shy children are more likely to create imaginary companions to make up for a lack of friends in real life. Taylor dispels that myth.

“Children who are less shy are more likely to have imaginary friends, which is the opposite of the stereotype,” she says.

Children with imaginary friends are better able to focus their attention and to see things from another person’s perspective, Taylor has found.

Taylor’s research has also shown that while imaginary friends are less common in adolescence, they do exist. In one study, she and her team looked at 152 at-risk 12-year-olds and followed up at age 18. Thirteen of the youth had imaginary friends – and fared comparatively well in life based on indicators like graduating high school and avoiding arrests, mental illness and drug abuse.

“We found those kids were much more likely to meet those criteria than other children,” Taylor says. “An imaginary friend was not a red flag. If anything, it’s a sign of resilience.”

Above all, Taylor says having an imaginary playmate is just plain fun.

Taylor says parents should relax and enjoy it. Express interest in what your child creates and you may get some insight into his wonderful little mind. Wonder if he likes the new babysitter? Ask what his imaginary friend thinks.

“Sometimes they’ll talk about things they’re not comfortable with and attribute it to imaginary friends,” Taylor says.

But Taylor cautions not to get too eager to share in an imaginary friendship or you’ll end up a third wheel.

“Children like to have ownership over imaginary friends, so getting too involved in it makes it less fun,” she says. “They’ll often give it up if you take too much control.”

Imaginary friends are great, but they can’t beat the real thing. Get tips to help your child establish friendships and be a good pal.