Gen Z has an interest in entrepreneurship unseen in previous generations. Here's what kid entrepreneurs are selling and how they're working for themselves. 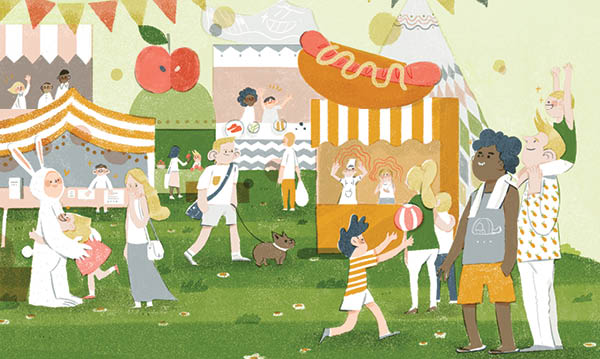 Not long ago, my daughter was vendor in Kids Mart at Genuine Toy Co. The event let kid entrepreneurs set up tables and sell wares inside the Westchester Square Shopping Mall in downtown Plymouth.

I helped her order containers from Amazon and find DIY recipes online. Together we bonded over measuring, melting and packaging the products.

She did the rest, from coining her company’s name – Vi Spa – and applying for her “business license” to creating a logo, labels, pricing and signage.

She moved $30 worth of product in three hours. It was fun to watch her interact with shoppers, keep track of sales and find empowerment earning real cash by selling something she made herself.

Since then, I’ve noticed more and more opportunities around metro Detroit for kid entrepreneurs to sell stuff. My niece, Ella, 12, has taken a page from her mom’s bakery business and markets her own handmade muffins and pastries under the name Lu’s Tastries. My nephew Caden, 9, recently earned $100 selling polymer clay emoji charms at the Acton Children’s Business Fair, a May event that’s drawn more than 50 kid entrepreneurs to Ann Arbor.

Wow. Today’s kid entreprenurs have come a long way from the lemonade stand I rocked when I was young. I started to wonder … is this a trend?

Turns out, yes – the business savvy kid is definitely a thing.

According to research, Generation Z has a definite entrepreneurial bent. Also known as post-millennials, kids born after 1995 have grown up during the Great Recession, and seeing their parents lose jobs and homes, as well as struggle with student loan debt, has left them insecure about the traditional path to “The American Dream.”

Instead of relying on college and corporate jobs, they’re carving out their own industrious futures. One Gallup study says eight out of 10 students in grades 5-12 claim they want to be their own boss, while another study, by Millennial Branding, found nearly 72 percent of high schoolers hope to head their own business.

And because Gen Z is so comfortable with technology and social media, they are empowered to find the information, resources and connections it takes to make their dreams come true.

As advertisers and marketers study how to interact with this independent and resourceful generation, schools, parents and organizations are finding ways to help these kids develop their ideas and sell to an audience of their own.

On the heels of what Yolanda Curry agrees is a national drift, demand for “kidpreneur” programs for kid entrepreneurs at Detroit’s Build Institute is on the rise. Curry serves as registration director for the nonprofit, which provides tools, resources and support for entrepreneurs. She says Build Institute is amping up offerings for the younger set.

In the past, the organization has hosted a Youth Build Bazaar event during Detroit’s Concert of Colors in mid-July. It has also staged a Youth Entrepreneurship Panel at the summer Maker Faire Detroit in Dearborn for business leaders and kid entrepreneurs to share advice and information.

Summer entrepreneurship camps are also a goal. “We would take kids through the ideation process to finish a business proposal and give them time to vend regularly at markets throughout the summer,” she says. “That’s the big goal.”

Curry sees the selling spirit of Gen Z in her own children, who’ve taken inspiration from her company, The D. The Jewelry, to craft designs their mom brings to life.

As of 2017, Michaela, 10, was drawing comic images, while Miguel, 6, sketched monsters and cars for to Yolanda cut from metal for them to make into jewelry.

They’ve participated in several fairs, like the Detroit Children’s Business Fair at the Detroit Historical Museum in spring.

“Being a business owner and mom, I want my children to have some knowledge of operating a business,” she says.

When the kids earn money, Curry helps them pay back the cost of materials, reinvest for future shows and deposit some in the bank to earn interest.

“Kids have a different way of looking at things. They’re totally unafraid,” she says. “If you get them thinking about business at an early age, they’re more apt to run with it and realize the value in ownership and having the power to take care of themselves.”

On a Saturday in 2017, my husband and I spent the day strolling through Midtown Detroit. Despite all the great new retail along Woodward Avenue, we only bought one thing – a small scented candle from Super Business Girl.

Asia Newson, then 14, was hawking her homemade candles from a small cardboard box in front of the Under Armour store.

Asia explained that she began making and selling candles with her dad in their Brightmoor neighborhood at age 5.

Today she has her own website, where you can find a variety of her 100-percent soy creations, including the signature Super Business Girl rainbow candle, which retails for $14.99.

But Asia’s mission is bigger than working with wax.

“I hope to inspire other kids to be entrepreneurs like me,” she told us. Asia, who attends the Detroit Academy of Arts and Sciences, has won numerous awards and accolades – and has been featured by TEDx Detroit, ABC’s 20/20 and The Ellen Degeneres Show. She hopes to someday open her own store in Detroit.

For the Caffelli brothers, entrepreneurship is a focus at school all year round. As of 2017, Charlie, 10, and Keenan, 7, are students at Acton Ann Arbor, one of 99 Acton Academy schools either opening or in the works worldwide in early August 2018 that focus on education for kid entrepreneurs.

The capstone event at these small nonprofit schools is a Children’s Business Fair where students, along with any other youth vendors who care to join them (for free), share their products, work and ideas with the public.

Previously the Caffellis have sold homemade popsicles, and more recently they brought a big box of Legos and built mini models on request for $10.

Scott Taylor, founder of Acton Ann Arbor, says children work all year to prepare for the fair, which locally doubled in size to 50 vendor tables in just two years, illustrating principles students have studied throughout the year.

“It’s the character and mindset that are the important parts of entrepreneurship,” Taylor explains. “The mindset is welcoming challenges, persevering through struggle, spotting opportunity and coming up with creative solutions to problems. That ability can be applied wherever they go and with whatever they do in life.”

Gabriella “Ella” Pierzecki, 13, made her first pair of tie-dyed tennis shoes for herself after getting the idea on Pinterest and supplies for Christmas. The colorful kicks were an instant hit.

“My mom put my final product on Facebook and a lot of people commented on them and said that they would buy them if I sold them. So I kept my eyes open for sales on white shoes and I found some and decided to start selling them,” explains Ella, a seventh grader at Pioneer Middle School in Canton as of 2017.

Under the name T.G.I.F., for Toes Go In First, Ella started cranking out adult and children’s sizes, selling them for $20 a pair through social media and events like Kids Mart and the July Plymouth Art in the Park, where she once sold out of 65 pairs.

Ella says running her business has taught her the discipline to meet deadlines and “not slack off.”

“We wanted her to create a business plan before she started investing her money and time, and she did,” Pierzecki says. “She has managed to keep her 4.0 GPA and her commitment to her extracurricular activities. It hasn’t been easy, but she works on her business during her very little free time. She feels that even 20 minutes is better than none.”

As founder of Ztring, Zwena Gray has sold tutus and jewelry and taught classes on six different types of computer coding.

But it wasn’t enough for the local 14-year-old homeschooler to run her own business – she wanted to give other kids a venue to build theirs.

That’s why she founded Youth Biz Vendor Fairs. With support from the UAW-Ford Saturday Schoolhouse in the D program, she holds spring events for kids.

Gray does everything from recruiting sellers and marketing through community outreach, flyers and Facebook to blowing up balloons and setting up tables the day of the show.

In spring 2017, youth vendors included a DJ, babysitter, custom gift bag business and the founder of a nonprofit organization that cleans up trash in Detroit.

“It’s really exciting because I love being able to mentor other young people,” she says. “Being able to inspire others to start their own business is amazing.”

Gray adds there are practical reasons kids should think like entrepreneurs.

“It’s kind of annoying to ask your parents whenever you want money. You can make a profit and have your own money,” she says. “You don’t have to wait until you’re an adult. You can do it now.”

This post was originally published in August 2017 and is updated regularly.