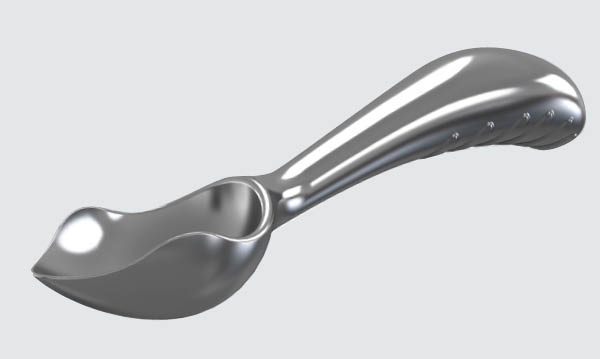 Michael Chou’s two kids scream for ice cream. But, after digging out countless scoops with a cheap spoon, the South Lyon dad’s wrists were “screaming” a little, too. Something delicious shouldn’t be a hassle, right? There had to be an easier way – so the engineer’s mind got to work. Alfred Cralle may have invented the ice cream scoop back in 1897, but Chou’s Midnight Scoop aims to perfect it.

On the surface, it looks pretty sleek. What sets is apart, though, is ergonomics. With Chou’s design, the wrist stays straight and you push harder and with larger muscles without hurting joints. “The back handle, where the curve is, is where the magic is,” says Chou. Standard scoops can’t push; the handle isn’t designed for it.

It didn’t take rocket science to invent Midnight Scoop – but Chou, a California native, is an aerospace engineer. He’s a serial entrepreneur, too; he also runs MYKIN.com, which makes custom-engineered rubber parts and mechanical seals.

The name is inspired by the long nights Chou spent tinkering on the scoop. Midnight would pass, he explains, and he’d keep working. As his website puts it, it “started out as an obsession – and remains one.”

Chou’s children, a 6-year-old daughter and son who’s 3, definitely inspired his creation. “My kids think it’s cool, but I think they’re more interested in the ice cream,” he admits.

Chou loves chocolate – and it’s gotta be Breyers. His daughter has a nut allergy, he says, and Breyers has good control on cross-contamination.

Chou’s scoop faces one challenge. “Just explaining to people how to use it. It’s a different way to do something.” But he believes it beats clunky spoons and microwave methods. “I personally don’t like melted ice cream,” he says, “and this scoop can get through the hardest and coldest ice cream.”

At a cool $50, the forged-aluminum, heirloom-quality Midnight Scoop comes in chrome, black, gray and white – and with a lifetime warranty. “I ran over it with my car,” Chou says. “It’s basically bulletproof.” Get 25 percent off when you sign up for his newsletter, too. Learn more or order at MidnightScoop.com.

Looking for a spot to get some ice cream? Get your frozen-treat fix at independent local ice cream shops. Here’s our roundup.