The Huntington Woods teen talks to Metro Parent about his experience competing on 'MasterChef Junior,' his love of cooking and more. 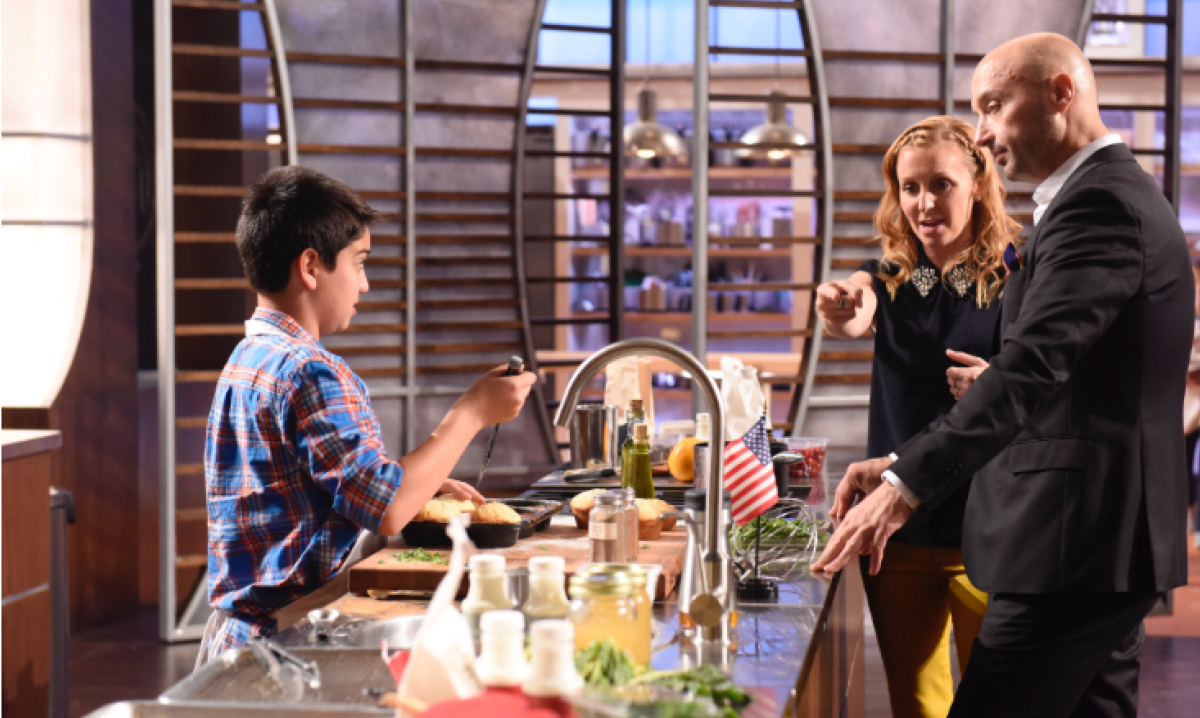 Walk into 13-year-old Sammy Vieder’s Huntington Woods house on any recent Friday night and you’ll find a dozen or so pair of eyes glued to the television. Someone has a finger hovering over the pause and rewind buttons on the remote control and there is an excitable buzz in the room as the family and their guests watch Sammy compete on the popular Fox television show MasterChef Junior.

Sammy was one of 44 kids chosen from a nationwide search to appear in season 6 of the reality cooking show and one of 24 to make it past the season premiere. Metro Parent recently caught up with Sammy to talk to him about his passion for cooking, what it was like being on the show and what advice he has for other kids who want a shot at being on MasterChef Junior.

How did you get to be a contestant on MasterChef Junior and what was the audition process like?

The following season, I tried out again, and obviously made it. The first round, in Chicago, was in July of 2016. There were a ton of kids there. They basically broke us up into groups of about 10-12 kids. We had to measure water, cut celery and cook an egg. After that round, we had to prepare a dish in 30 minutes in a kitchen they had. I made chicken pot pies with a homemade cranberry sauce and served it with a side salad. They asked me all these questions while I was trying to cook my dish. It was a little bit stressful but also lots of fun.

After that round, we had to go back home and make a bunch of videos. I had to give them a tour of our refrigerator, my room, interview my siblings – a whole bunch of stuff. It was fun to make, but time consuming. After that, we had to go back to Chicago for the next round, which was a background check on my parents and psychological testing for me. That was pretty fun too. And finally, we got the call from L.A. saying that I was invited to participate in the final round before the show.

How did you get into cooking and where did you learn how to cook?

I’ve always loved cooking for as long as I can remember. When other kids were talking about baseball or football players, I was always talking to my teachers and parents about Food Network stars or recipes. I said on the show that I come from a ‘carryout’ family, and that’s really the truth. We always had boxes in the fridge from all sorts of restaurants and one day I asked my mom why that was. She told me that she never liked to cook and that her mom never cooked and that my great grandmother never cooked. So I decided to give it a shot. And I really liked cooking. I’m also named after my great grandfather, Sam, on my dad’s side. He owned a deli in Ferndale and loved everything about food. I think that I must have some of him inside my soul.

I would read cookbooks religiously over and over again. As soon as I was able to use the computer, I started watching cooking videos. I think I’m pretty much self-taught. My aunt Ally loves to cook, as well as my aunt Jenny in Chicago. I’ve cooked with both of them before and it’s always awesome and fun. Jenny is a vegetarian and Ally is a vegan. They’ve both showed me a lot of different types of vegan and vegetarian dishes.

What’s your favorite dish and why?

I’m really into baking these days. I was never much of a baker, but I love to bake now. I like cooking for my family and friends and take requests all the time. I just made a dessert called croquembouche, which is a French dessert, sort of like a bunch of cream puffs stacked tall with a caramel cage drizzled over it. It looks great and is also fun to say. That was a big hit with my family and friends.

It was so much fun. I met so many cool new friends. It was also pretty tiring on some days. We’d have regular school, cooking school (and) episode taping, for example. But it was always a lot of fun. The people that worked on MasterChef Junior were always super nice and kind. They did a great job keeping us kids in line.

We’d usually have to be on set anywhere between 7 and 8 a.m. depending on the day. We’d pretty much always have a few hours of school and then some cooking school. On taping days, we’d have to be in the kitchen on set all day. Those were great days, but also very stressful at times. We’d wrap up around 5 or 6 p.m.

It was weird. I feel like I look and sound so different now. It’s fun to relive everything though. And also fun to see how everything is edited. Also, I have changed over the year and a half between filming the show and now. My voice is deeper, I’m a lot thinner and I’m at least a 5 inches taller.

He’s actually really nice. I learned a lot from him. He’s a dad, so he’d always encourage us to do our best.

What dish have you made that you’re most proud of and why?

I think I was most proud of this beef dish that I made. It was a pan-seared steak that I served with a compound butter and flash-fried Brussels sprouts. It was really flavorful and looked awesome.

What was your biggest cooking fail?

My mom and I were making ravioli one time and we couldn’t get them to fully close. We ended up with lots of exploded ravioli but after trying the dish a few more times, I finally figured it out. It’s really hard to get something just right on the first try. I typically have to make a dish a few times before I’m truly satisfied with it. But I’ve also found that I learn more from my failures than I do from my successes.

How has being on the show changed your life (if at all)?

It’s been a lot of fun. I get a lot of attention, which is fun but also a little bit unnerving. Everyone wants me to cook for them, which is cool but it’s also a lot of pressure. But I’ve found that I love teaching about cooking. It’s been fun teaching little kids how to make my dishes.

What advice would you give to other kids who want to be on MasterChef Junior?

Just go for it. Try everything and don’t be afraid to make mistakes. That’s where you’ll learn the most.

So cool. I still keep in touch with so many kids from the show. At night, we’d hang out in the pool and talk food. That was really fun.

Did you get to eat anything you cooked on the show?

We’d get to taste our own food, but other than that … nope!

What else can you tell us – without violating any confidentiality agreements you signed – that we would think was really interesting about being on a national TV show?

I have a couple of fan pages and my Instagram account is blowing up. It’s been a lot of fun and I feel so truly lucky to have had this experience. I’d say if you’re thinking about trying out, to just go for it. The process itself is really fun. I can also tell you that it’s super scary when the judges taste your food and just stare at you. But the feeling when they tell you your dish is tasty, is awesome. Joe was super scary, but when he gives you a compliment, you’re on top of the world. Christina was really kind and nice and Gordon is Gordon. He’s an unbelievable chef and I feel so lucky that I was able to cook for him.

Ever been at a restaurant and felt the need to barge into the kitchen and give the chef a few pointers?

Not really. I know how hard it is to be in the kitchen. I appreciate every dish I’m served now. It can be stressful getting everything on a plate.

What do you want to be when you “grow up?”

I’m really not sure. I will always have some sort of cooking in my life. I know that. But, I don’t know if I’ll be a restaurant owner, chef, food critic or something entirely different.

When you’re not cooking, what do you like to do in your free time?

I like to hang out with my friends, read and eat. I also love summer camp.

Want a behind-the-scenes look at what it’s like being a contestant on MasterChef Junior? Sammy will participate in an audience-led cooking challenge on Sunday, June 3 at 1:30 p.m. at the Friendship Circle’s Farber Center in West Bloomfield. He will be joined by local chefs who will demo and sample easy, kid-friendly recipes. All proceeds benefit the Friendship Circle, a non-profit organization offering programs and services to children and young adults with special needs.

For more information and to register, visit friendshipcircle.org/kidsinthekitchen.