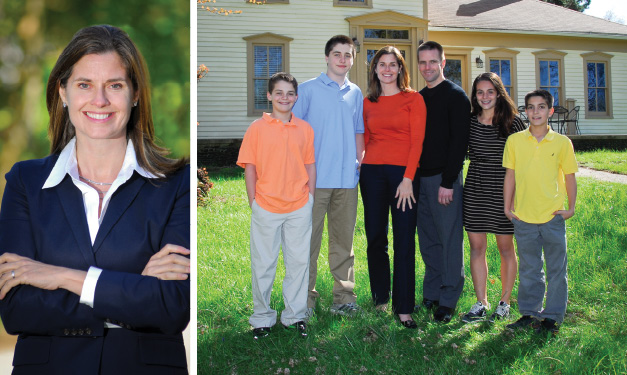 This ought to sound familiar to any mom of busy high schoolers: Asked the best time to schedule a phone chat, Bridget Mary McCormack suggested the next day, when she’d be in the car for four hours – driving two of her four kids from their Ann Arbor home to Interlochen for a summer program.

McCormack can multitask with the best of them. She is on the faculty of the University of Michigan Law School, where she serves as the associate dean of clinical affairs. And she’s running for a seat on the Michigan Supreme Court in November 2012. Mix-in her teens and husband, Steven Croley, who’s serving as White House deputy counsel (and thus is frequently in Washington, D.C.) – and that’s a lot of juggling.

But, mom points out, the juggle happens because she doesn’t want to miss out on anything. She’s passionate about her career – and devoted to her kids.

That leads to plenty of zany moments. Like the time she made dinner for her son’s swim team meet at Ann Arbor Pioneer. McCormack was whipping up sandwiches and had 360 pieces of bread spread out on every available surface – except the small slice of countertop reserved for her laptop, where she was checking email. Simultaneously, she was on a conference call on speakerphone, and the kids were wandering in and out. “I just thought to myself, ‘Yeah, this is how you get it done,'” she quips.

That kind of work ethic and energy comes from her parents, she says. She grew up in Plainfield, N.J., with a mom who went back to school to be a social worker when her kids were nearly grown – and a dad who was a Marine and a small business owner who worked seven days a week his entire life. They were very supportive of all three children, McCormack says – though she’s the only one to pursue law. Her sister is the actress Mary McCormack, currently starring in the USA Network TV show In Plain Sight, and her brother Will is an actor and screenwriter whose movie he co-wrote with actress Rashida Jones, Celeste and Jesse Forever, was just released.

Bridget Mary McCormack is running for Michigan Supreme Court in November 2012. If you’d like, get a sense of what she’d do on the bench.

So – how’d she wind up in law? McCormack laughs. “The first answer is, I am the oldest, and we play to our family roles in terms of birth order.” The second: “I had an early passion for justice.” Another powerful influence was her godmother, a legal aid attorney in Manhattan. When McCormack was a child, she’d visit her overnight and go to court with her, observing how she represented people who could not afford lawyers.

That directly affected McCormack’s current career, too. After graduating from the New York University School of Law, she worked as a legal aid lawyer. At U-M, she established clinics for Domestic Violence Litigation, Pediatric Health Advocacy, Entrepreneurship and the Michigan Innocence Clinic. All three offer access to legal services clients can’t otherwise afford – and help expose law students to the legal profession.

This “real people with real problems” context is key to teaching future lawyers about the responsibility and values of the profession, she says.

“We actually try and focus our clinics in areas that the law struggles with – difficult areas that the law hiccups around – and we try and figure out, if we put really smart law students on the problem, can we address it more generally?” McCormack says. “It feels like very rewarding service work in addition to, in my view, really important teaching work.”

Despite being a lawyer and professor, mom says elective office has never been a goal. But she is interested in making the justice system work more efficiently for more people – and McCormack feels running for Michigan Supreme Court can help her hit that target.

“I care so much about the way the state court operates,” she says, “and it’s the Supreme Court that has the ultimate authority and supervisory power over how justice is administered throughout our state, down to our local levels – that I decided I could be a positive force in serving on that court.”

It’s her passion for her career that she hopes will influence her kids, no matter what path they choose – whether it’s law, Hollywood or something else entirely.

“My husband is also a lawyer and professor, and I consider us both very happy lawyers and teachers,” she says. “We found careers we are passionate about and that we are excited to get up and do every day.

“That’s ultimately what I want for them … whatever it is they choose, I want them to have gained from our example the idea that you can make a difference and you can love what you do, and it’s a pretty important part of your life.”