The Power of Popularity and Kids

What makes someone popular? The power of popularity and kids is definitely strong. But does it really matter in the long run? 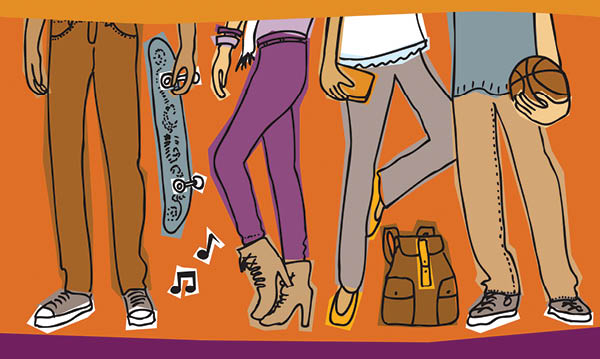 Durand Miller recalls being a popular kid in high school. “I was the kid coming from Detroit to Windsor, Canada, and the kids there thought that was cool,” he says. “That and I also happened to be pretty good at basketball.”

The attention of other students helped ease Miller’s transition into a new school and a new country, as his family was going through difficult times. And yet being identified as “popular” left him feeling empty. “(The students) liked me for my popularity, but I didn’t feel like they really knew me. I was just a jock.

“I didn’t get to know myself,” continues Miller, now a father of two, ages 7 and 9 at the time of interview. “You know what people think about you, but that’s often a lot different than what you think about yourself.”

The experience spurred Miller to become a therapist. Now a licensed counselor with a practice in Birmingham who also works at a private school, Miller has seen how popularity can change kids for better and for worse.

With the school year just getting started, your child is likely to encounter similar quandaries about popularity – whether he or she is part of the “in” crowd or not.

“Children’s awareness of popularity starts as soon as they begin having social interactions with their peers,” says Oksana Hagerty, Ph.D., an educational and development psychologist at Beacon College in Leesburg, Florida. In preschool, or even day care, as children begin to engage with others they start to define themselves in relation to them.

How they’re viewed, in comparison to their peers, becomes more and more important as children head into their tween and teen years.

To put it in pop culture terms, it’s the difference between Will Smith on The Fresh Prince of Bel-Air, who’s a “nice” kid and popular for his positive interactions with others (Uncle Phil may disagree) – and Rachel McAdams’ character, Regina George, in the 2004 movie Mean Girls, who manipulates and acts out against those in her friend circle to maintain her status.

The distinction explains why popularity, if it falls into the latter category, is connected with bullying.

“Perceived popular kids have some degree of social aggression,” Hagerty says. Since these teens have attained a popular status, they become more insulated from reproach. They may pick fights, exclude others, spread rumors or exhibit other behavior knowing they won’t face a backlash – from their peer group, or even adults. After all, they’re in the “in” crowd.

Popularity’s very nature also has changed in the past decade, Miller adds. “Social media has made it possible for kids to reach out and find others like them no matter their interest.”

In other words, kids can find their own niche online and draw popularity from what they post – and among those they interact with digitally.

On the flip side, social media can make it easier for a child to experience bullying and cyber-bullying – which increases in the middle and high school years – and heighten feelings of isolation and self-doubt.

“Parents need to understand that for all age levels, social media is stressful. For kids, they often feel like they have to maintain a presence 24/7. When we were kids, when you got home from school you could just take a break from the pressures of school. But today, when kids get home, those pressures just begin.

“We’re seeing stress levels and anxiety skyrocketing among kids. They feel like they always have to be ‘on.’ Just like CNN has news 24/7, these kids are getting messages from friends and interacting with them constantly.”

To help mitigate those pressures, Miller recommends parents know what their kids are doing online. Ask questions. “Your kid is likely to welcome the chance to tell you everything about their favorite people they’re following on Instagram and Snapchat. They want to be able to teach us, and there’s a lot we can learn when we take the time.

“Just think about it – social media was originally formed so people could share what they were learning, parents can use it the same way to learn from their kids and to start conversations with them.”

“The question parents need to pose when it comes to their kids’ popularity is, ‘Where does it come from?'” says Miller. “In other words, what are (their kids) popular for? If you ask that question, you can get down to the nuts and bolts of what you’re teaching your child and what they’re internalizing. The answer you have and the answer your child has might be very different.”

Miller encourages parents to be honest when contemplating the answer: If your child seeks to build up others in his friend group, odds are his popularity is based on his compassion and selflessness. Adversely, if he’s showing off or doing stunts, his popularity doesn’t come from a place of authenticity. It could be that his popularity helps make up for a sense of insecurity, Miller says.

Kids who continue to act out to maintain their social status may not encounter any serious pushback during their school years (although they may cause emotional harm to their classmates). Yet once they enter adulthood, one long-term study, which tracked so-called “cool” kids from ages 13 to 23, found that their early popularity came with a cost. Later in life they had “long-term difficulties in close relationships, as well as significant problems with alcohol and substance abuse and elevated levels of criminal behavior.”

A cue from celebs

So what can help kids develop into well-adjusted adults? “You need to be your own best friend before you can be a good friend to others,” says Susan Wainwright, M.D., R.N. and assistant clinical psychiatry professor at Oakland University William Beaumont School of Medicine who also has a private practice in Bloomfield Hills. Having a solid inner circle of people who love and support the teen can help boost a child’s self esteem and reinforce that positive sense of self.

Miller also finds that the discussion of a child’s popularity isn’t as important as whether they have a positive self-image – and a support group that recognizes them for it. Within his practice, he’ll often do an exercise where he holds up a mirror to an adolescent (well, usually a smartphone with the camera turned to them) and then he’ll ask, “What do you see?” and “When was the last time you told yourself you loved yourself?”

While this exercise may be hard for a parent to pull off, the principles are instructive: Your child needs to value himself to value others. Those he surrounds himself with can help him build up that authentic sense of self that’s not about what he’s doing but who he is.

“I’ll tell kids, even Taylor Swift has an inner circle, and LeBron James has one too. Those are the people who guide you and keep you out of trouble. They’re the ones who may tell you what you don’t want to hear, but they’re honest with you.” Miller notes that parents can be part of this inner circle, too, along with friends, other family members and even teachers.

So it doesn’t matter whether your child has 15 friends or one; it’s the nature of that friendship – and her connection with those friends – that counts. Popularity may come with it or it may not, but as long as your child is building up her ability to be emotionally supportive with herself, and with those around her, she’s more likely to make her way into adulthood feeling confident and happy in her own skin.