A study found that children's programming has more violent acts than shows geared at adults. How does television violence impact your child's developing mind? 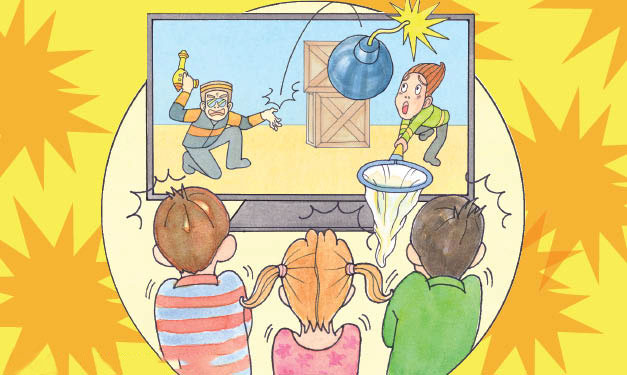 Whether children watch hours of TV or just a few minutes a day, protecting them from an onslaught of movie and television violence is increasingly difficult. In fact, the National Television Violence Study found children’s programming contains more violence than that geared at adults: A full 100 percent of animated feature films produced between 1937 and 1999 contain violence, compared to just 61 percent of all broadcast programming.

More disturbing, the American Academy of Pediatrics that media violence is becoming more malicious – a growing number of violent acts feature intent to injure. And 80 percent of violent acts in modern music videos target women and minorities, according to a study published in Pediatrics.

In another study, in Journal of Research in Crime and Delinquency, youth who witnessed violence were more likely to be victims of it themselves.

So is media violence damaging to kids? What’s the impact of all this on children’s developing minds? Does on-screen aggression play out in real life? And how can parents shield their growing kids?

Parents are right to be concerned, says Brad J. Bushman, Ph.D., a professor and researcher at The Ohio State University School of Communication. Bushman studies the impact of media violence on behavior and says that, without question, there’s a connection. In particular, he says research shows violent media has three clear effects on viewers: It increases aggressive behavior, escalates fear and makes viewers numb to the suffering of others.

“People who view a lot of media violence are more likely to view the world as a hostile place, so they have more fear,” Bushman explains, “and they’re also more likely to act aggressively toward others.”

In one of Bushman’s own studies on the topic, one group of students played violent video games; another, nonviolent games. Afterward, all students witnessed actors play out a real-life violent scene in which one party was injured and asking for help. But members of the group who played violent games were about 450 percent slower to respond to the “victim’s” pleas, says Bushman. “After watching people get their heads blown off on-screen, people are much less sympathetic to someone with a twisted ankle or a bloody nose,” he says. “It seems like no big deal.”

It’s also a myth that media violence only harms boys. Researchers from the University of Michigan found both women and men who viewed high-violence media content (in shows such as Roadrunner cartoons) when they were between ages 6 and 10 were more likely to have shoved or pushed a spouse as an adult.

“Violent media have more negative impact if the child identifies with the perpetrator – and in a violent video game, the child is literally playing the role of the perpetrator,” he says. The games also offer immediate, explicit rewards for violent acts; a voice booms, “Nice job!” when a player wipes out an opponent, for example.

“Based on research, it’s sound to say that active involvement enhances learning,” says Bushman. When it comes to violent video games, that type of learning is a bad thing – because a child who is actively involved in on-screen violent acts is literally learning violence firsthand, he notes.

Impact is more profound in kids who are more aggressive to begin with, along with preschool-age kids and those who may have witnessed real-life violence. Consider stricter media boundaries if your child falls into a high-risk category.

But parents can go beyond simply limiting exposure by actually viewing the violent content with their kids and discussing it, Garrison adds. You’ll get to see it firsthand – and insert some immediate, key questions, like “Why do you think that happened?” “How do you think the victim felt?” and “What could have been done differently?”

“It can start some incredibly important conversations,” Garrison says.