Reports Show that Millennials are Moving Back Home 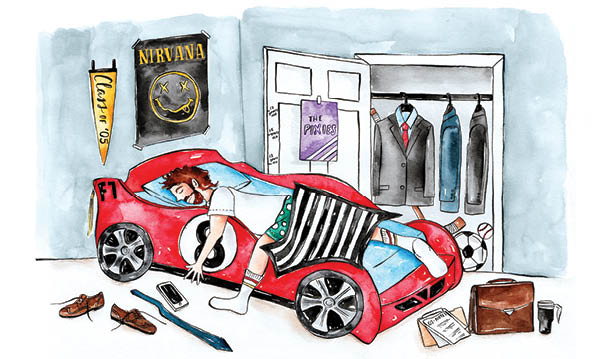 Andrea Ozanich, 23, grew up in Berkley and moved out of her parents’ home as soon as she could live on campus. But after five years of living by herself in Midtown Detroit and working as a Wayne State University residential advisor, Ozanich found herself returning to her parents and two brothers.

“It was a combination of family issues and personal, trying to figure out what makes me happy,” Ozanich says. “I talked to my parents about it and they were completely supportive.”

She’s among 24 million young adults ages 18-34 who’ve made that call, according to an April U.S. Census Bureau report. The vast majority, like Ozanich, are studying (she changed majors, which fueled her choice) or working. A smaller slice, 19 percent, are “idle,” the report says, or home for non-economic reasons.

“There’s a stigma attached to moving back home, and it’s not positive,” says Ozanich. “I think it’s important to look at it from a different lens. If that’s what you need to do to make sure you’re getting your stuff done – if it’s for saving money or if you need to move for family reasons, anything along those lines – it’s OK.”

That’s partly what’s happening with those so-called “idle” older millennials – 2.2 million between ages 25 and 34 – that grabbed headlines. It’s not for lack of effort, the report notes. Often, this group is more likely to have a child they’re caring for or a disability, and they’re less likely to hold a high school degree.

More often, though, these young adults have stories similar to Ozanich’s. But whether the reasons are economic or not, there’s a big overall shift.

The report compared 2016 data to 1975. Back then, 45 percent of 25-to-34-year-olds were living away from their parents, married with children and securely in the workforce. Today, only 24 percent of young adults have all those boxes checked off. This change “goes hand in hand with looking at American attitudes and values,” writes Census demographer Jonathan Vespa. “Americans overall tend to rank educational and economic accomplishments very high and as very important parts of becoming an adult.”

Most at-home millennials say housing would be unaffordable otherwise. “The picture of living with parents or roommates is one of young people who are working toward a firmer footing,” Vespa writes.

In other words, an entire generation of adults is prioritizing security over independence. And living with mom and dad again is a way to get there.

So what’s this burgeoning “boomerang” trend mean for family dynamics?

“I think the jewel in all of this is how we can all learn about each other,” says family counselor Laura Sacks Kohn with Southfield Mental Health Associates, P.C. She’s seen lots of kids coming home to their parents – including her own.

“We’re all living with one another, and we need to know people anew. Now you’re meeting your child who’s kind of grown up.”

This rings true for Ozanich, who says she has a great relationship with her family, but it was a jolt when her parents asked, “When are you coming home tonight? Who are you hanging out with?” It was the first time in years she had to provide answers.

“They’re just trying to see if they need to leave the back door open for me or if I have my house key, but sometimes it’s a bit of a transition.”

It’s essential for these adults to figure out how to live together well, Sacks Kohn says. An easy practice she suggests is to set aside time every day to share appreciations.

“Sometimes, even though a person’s right in front of us, we don’t see them clearly,” she says. However, if problems persist, she highly recommends seeking a therapist or counselor to bridge any gaps.

Establish rules of respect, too. If parents need their adult children to contribute to food and rent – or for them to be quiet if they’re coming home past a certain time – verbalize those boundaries.

Ozanich agrees. At home, she’s required to help out.

“It’s a little bit stressful, especially right around finals time,” she says. “I’m going to choose writing my final paper over emptying out the dishwasher, and so all of us need to come together and be like, ‘Let’s regroup, let’s figure this out.'”

The biggest thing for Ozanich and her parents is communication. Her not wanting a curfew took some open conversation and compromise.

“Allow it some time,” she adds, noting the switch is difficult for both sides. “It’s definitely an adjustment.”