Women still have the lion's share of responsibility for housework and child care. Is there any hope of getting a better balance between the sexes? 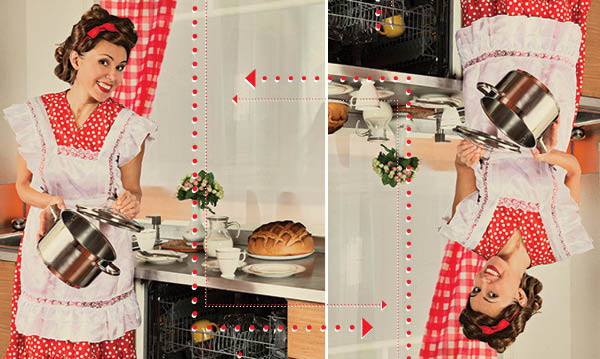 The idealized version of the 1950s woman cooked, cleaned and was adept at using the latest appliances, all while impeccably outfitted in a modest dress, ruffled apron, high heels and pearls. She kept an immaculate house, baked cakes and lived to tend to her children’s needs.

When her husband got home from a hard day at the office, she greeted him with a scotch and a smile, finishing dinner while he relaxed behind the newspaper in his favorite chair.

We all know this dated cliché of the perfect homemaker. She was promoted in Hoover ads, fleshed out in TV shows like Father Knows Best and offered comfort and stability in a post-war world.

Fast forward to today, and images of June Cleaver and Betty Crocker seem quaint and nostalgic instead of aspirational.

Women have long since outgrown the strict confines of the stereotypical homemaker role and entered the workforce in droves.

We’ve traded housedresses for Lululemon and can’t wait to cast off our heels and jewelry as soon as we walk in the door. Dad mixes his own drinks – and maybe one for mom too.

Yet, even as dad’s newspaper continues its slide into relic status, retro aprons have made a comeback as kitschy cool, symbolizing the fact that as far as we’ve come, some assumptions endure when it comes to household duties and parenting responsibilities.

Studies show women are still doing more around the house, and experts say gender-based expectations can cause marital stress, as well as influence kids to carry these roles into the future.

But families can work together to equalize the load.

The Bureau of Labor Statistics’ annual Time Use Survey shows that more women than men report doing household chores – and spend more time on tasks like cleaning, cooking, dishes and laundry. The latest stats reveal that 65 percent of men reported doing some household activity each day, as opposed to 83 percent of women. Of those, women spent about 2.57 hours on chores each day as opposed to the 2.11 hours spent by men. That adds up to 46 more minutes per week, or 2,392 more minutes each year, despite the fact that more women share the responsibility of bringing home the bacon than ever before.

According to the U.S. Department of Labor, women make up nearly half (47 percent) of the workforce, and 70 percent of American women with children under age 18 work.

In four out of 10 households with children, women are the sole or primary breadwinner.

The problem with this scenario, says Novi-based author and nationally certified counselor Tara Michener, is it can cause resentment to simmer under the surface of a happy home.

“You’d be surprised how often married couples get stressed about chores, responsibilities, what’s fair and what’s not,” says Michener, of Michener Associates in Novi. “This is something me and my husband Jason constantly refine in our own lives, and I talk about it with people I counsel a lot.”

“They’re triggers for arguments and strife in a marriage,” says Michener. “It adds up. If you have an instance where both parents work just as hard, just as much, if somebody in that family is conditioned to believe one person has to do something without having leeway for a talk about it, it becomes a baseline for stuffing emotions.”

And that, she says, can lead to emotional, physical and familial problems.

These days, Jason does most of the cooking, which he enjoys, and the dishes, because he’s particular. Tara handles the shopping and wields the vacuum, which she finds relaxing.

“I think it’s really important to sit down and discuss what you like to do, what you’re good at, what you can easily get done, and what’s best for your household,” she says. “Every family is different.”

Michener says she and Jason are handing down these values to their 3-year-old son, easing him into an increasing array of chores as he grows.

“It’s important to have your kids try different chores. It shouldn’t be ‘you’re the girl, do the dishes; you’re the boy, take out the trash,'” she says. “Try on different roles. Switch chore cards. Give kids the autonomy to trade. ‘This week you vacuum the car, next week you sweep the porch.'”

According to child psychologist Aimee Kotrba of Brighton, chores teach kids responsibility and give them a sense of pride and value within the family.

Boys and girls are both capable of picking up toys, clearing the table and emptying wastebaskets. Light dusting and sweeping are also a good place to start. As kids get older, parents can teach new chores by first demonstrating, then helping and finally observing as kids tackle tasks on their own.

Weeding the garden can evolve into mowing and edging the lawn. Washing the car can lead to fixing a flat and changing the oil.

Replacing light bulbs and tightening screws can introduce both genders to tools and home maintenance.

Boys and girls can both prepare meals, starting with toast and graduating to scrambling eggs, using the microwave and making simple recipes.

In this way, they realize what it takes to contribute, regardless of their sex.

“We know really strict gender roles are unhealthy for men and women, along with boys and girls,” she says. “The attitude that you use when you split up the chores for kids shows the appreciation and worth that you put behind the chores. Moms and dads should talk about partnerships, the shared importance of chores. All chores are important for a home to run well.”

Kotrba and her husband Jeff, an architect, have three children, ages 4 to 7, and they take pains to recognize each other for household contributions.

“We try to split chores up not on their gender but their developmental level, abilities and interests,” she says. “We have them revolve through chores on a weekly basis, so they get exposure to all different chores.”

The family chore chart includes clearing the kitchen table and vacuuming underneath it with a sweeper. They also put their clothes away and clean their playroom.

Kotrba sees the impact household stress has on her clients at Thriving Minds Behavioral Health Center.

“The idea of being overwhelmed at home comes up every session,” she says. “Although I think parents are hesitant for some reason to give chores to their children, maybe because kids are already overwhelmed with homework and extracurriculars. But chores go a long way toward making kids feel like they’re an important part of the family – and to relieving mom and dad.”

“All of the research shows women still do more around the house than men,” she says. “Men have come a long way in terms of how they contribute to the house and kids. It’s consistently improving. But even for families that are not stereotypical, and families where both parents are working, women still do the vast majority of child care and housework.”

The housework gender gap is an issue even for Melinda Gates, wife of Microsoft founder Bill Gates. She used this year’s Gates Foundation annual letter, in which she and her husband outline their philanthropic goals, to bring attention to the unpaid work of women.

Globally, she writes, women spend an average of 4.5 hours a day on unpaid work while men spend less than half that much time. This results in engendered economic disparity.

In America, women spend more than two hours daily on unpaid work, compared to 82 minutes for men. To be fair, in the U.S., women are more likely to work part-time than men, and employed men worked an average of 52 minutes more per day than employed women.

The fact that some women have more flexible schedules than their husbands, by choice or design, means they have more time to devote to sick children, volunteering in the community, running errands and cleaning up.

That’s the case with the Sagans of Hazel Park. Anne juggles her own cleaning and organizing business, Neatniks, a part-time waitressing job and serving as an aide at her son’s school, while Kraig works full-time at AT&T.

“I work less, which gives me longer windows to shop and cook in the afternoons. He drives to most of the kids’ games, piano lessons, ninja warrior classes,” Anne says. “We definitely both put in the same amount of time and effort to make this family and household run smoothly and with minimal chaos.”

She says their duties have naturally fallen into a traditional pattern. She does the cleaning, laundry, shopping and most of the cooking. He does lawn care, house maintenance, trash and recycling and changes the oil.

“I have waited for him to change a light bulb, even though I could do it. And he has run out of socks, waiting for me to do laundry. So, yes, we have unspoken jobs that we are responsible for. And truly without resentment or any kind of marginalizing of each other,” she says. “It’s cool, because I really don’t want to mow or trim hedges or change the oil. And I truly enjoy hanging out the laundry, working in the garden and a clean house.”

Meanwhile, the Sagans are teaching their two boys to do a little bit of everything.

“We have an official chores schedule, which we rarely look at. We pay more attention to the things they need to do before any electronics. Make bed, brush teeth, read for 20 minutes, straighten their room, get dressed … The one part of their chores list that we do pay attention to is the ‘help with, when asked’ list – laundry, recycling, dishes, setting the table, taking trash to the curb, unloading groceries. They do these things without payment. It’s just a part of living in a house. Everyone takes care of their space and helps each other out.”

Sharing responsibilities, despite gender stereotypes, and seeing the big picture is the key, experts say, to raising kids who grow up thinking of housework as a shared responsibility. Happy housewife? How about happy home.