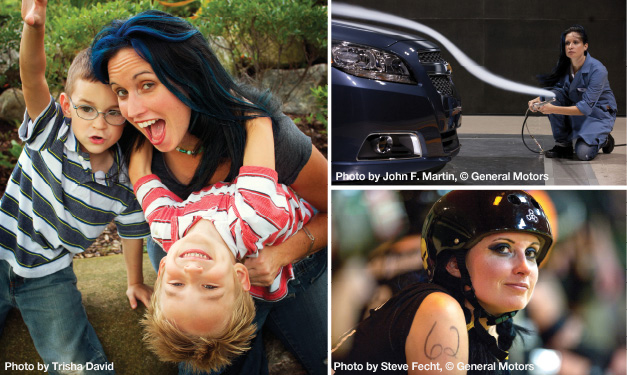 But Cody’s everyday job is mom to her derby-loving, car-crazed sons: Lance, 7 and Roman, 5. Which makes for a pretty packed schedule!

“It’s certainly not easy,” Cody says. But the single mom is forging her own path bucking “what a woman is supposed to be.” Just by doing what she loves.

“I’m not looking for approval,” she says. “Not everybody approves of doing derby and being an engineer!”

Cody’s always been true to herself, though. As a kid, she was “one of those girls you would have typecast as a ‘tomboy,'” always interested in science and good at math.

“My parents weren’t big on gender roles,” says Cody, who grew up with a brother. “I’m trying to teach my kids that, too. There’s no mold they need to fit into as boys or girls.

“I stumbled into where I am because I didn’t have restrictions on me.”

That wound up being the aerospace engineering program at U-M Ann Arbor.

“Once I saw that wind tunnel, I was hooked,” she says (that’s the device engineers use to design aerodynamic vehicle exteriors). “I was inside it at one point, and they turned it on – and I couldn’t think of doing anything else.”

Right after college, Cody landed her “dream job” at GM, where she’s been almost 13 years. She’s now in that tunnel all day with designers, technicians and sculptors, testing and shaping clay models of evolving GM cars to be a “balance of beauty and function.”

At GM, Cody’s worked on the 2000 Chevrolet Malibu, ’04 Malibu Maxx, Pontiac G6 and, most recently, 2013 Malibu – the most fuel-efficient model yet, GM reports, with Cody’s crew cutting 60 counts of wind drag.

Work in the wind tunnel begins as soon as the designer dreams up a car, Cody says, meaning she’s often working a couple of years in advance. The hours – 4 p.m.-midnight or midnight-8 a.m. – are the biggest challenge.

But engineering’s given her great perspective on gender in the work force.

“You can be smart, assertive and confident and still be feminine,” she says. “I find I don’t have to prove myself (today) as much as I used to.”

And Cody’s career has had some surprise impact over the years.

Her vibrant blue hair, for one, was inspired by that trademark GM blue, she says. Both her boys know about all types of cars because of mom’s involvement shaping them. Even her derby persona is auto-inspired, paying homage to her recently sold bright orange Camaro SS.

You might even say Cody herself is aerodynamic, zipping around the rink to avoid being clobbered by girls as big as three times her size. In her fishnet tights, booty shorts, jersey, roller skates and protective gear, she fights through the other players to score points as the Bath City Roller Girls’ jammer.

But when she started in November 2010, Cody hadn’t skated since she was 12. When she and her Macomb Moms group participated in a charity event, Cody saw the derby girls – and decided to give it a shot.

“It was one of those ‘why nots?'” she recalls. “Roller derby is rough. I’m not getting any younger. Now, I love it.”

Lance and Roman do too, she says. The kids attend many of her bouts – as the matches are called – to cheer her on. After they’ve helped her practice, that is.

“I play roller derby at home with the boys,” she says – to the punk tunes of Flogging Molly in the living room. “(It’s) one of their favorite things.”

Not to mention, “It’s good practice for me to block a 5-year-old!”

Being a derby girl doesn’t come without bumps and bruises. Cody’s just coming off a twisted ankle, and her shoulder once separated during a pile-up.

“I get nervous before every single bout, even in practices,” she admits. “You never know if you’ll have a rough day.”

But taking the chance to pursue her newfound derby hobby has taught Cody a lot of about self-confidence.

“I’ve always been on the outgoing side,” she says. “I’ve never had the strength to show it, though. There’s so much I wanted to do, but (was) never secure enough to do it.” Now, with derby and her career, “I’m not too worried of people’s perception of me anymore!”

After unlacing the skates and leaving the wind tunnel behind, she enjoys slowing her roll, doing anything from gardening in the yard to camping, she says.

The boys have different and unique personalities – and mom’s more than happy about that. “My youngest is the class clown. He’s a unique creature.” Lance, on the other hand, is “studious,” enjoys reading and “thinks about everything before he does it,” she says. “(He’s) very different from me, but keeps me grounded. He teaches me patience.”

Derby’s also influenced Cody as a parent, she says, by giving her a competitive outlet – versus using her kids to “compete” with other moms.

Cody hopes her kids learn “there are no limits” to what they can do in life.
“I want to raise a couple of boys who are secure enough to be kind (and) tough enough to be gentle, chivalrous and sensitive,” she says. “They can do their own thing and be their own person.” Sounds familiar, right?

“I’ll never be the best mom, smartest engineer, fastest derby girl, prettiest woman, or best any one thing,” Cody says. “But I’m the only blue-haired, derby-skating, aero engineer mom that I know – so I’m the best at that!”