A Duke University study showing the benefits of raising kids without religion prompts a debate. Here, two local moms weigh in on their choice 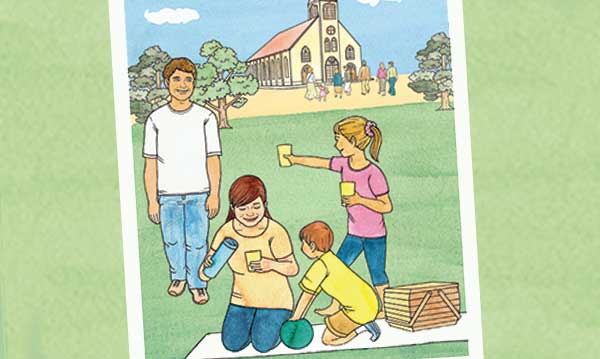 Religion was a normal part of life for Southgate mom Haley Kasprzyk and Dearborn Heights mom Erika Krikorian when they were growing up. Both were brought up in Catholic homes. But today, one has chosen to raise her children without religion.

During her teen years, Kasprzyk realized Catholicism just wasn’t a fit for her. Fast-forward to today: Kasprzyk and her husband are actually raising their kids – ages 6, 3 and 7 months – in a secular situation. “To us, religion is outdated and honestly quite unnecessary,” Kasprzyk, who considers herself a secular humanist, says.

The family is among a rising group of American households that define themselves as “nones” – those who believe in “nothing in particular” when it comes to religion. That’s based on Pew Research Center data in recent years. In fact, Pew notes, one-fifth of the U.S. public is “religiously unaffiliated.”

Religion isn’t dead, however. In the United States, 78.4 percent of adults are Christian – Protestant leads at about half, followed by Catholic at nearly 24 percent, then Mormon, Jehovah’s Witness and Orthodox. Jewish, Buddhist, Muslim, Hindu and “other” believers make up 4.7 percent of the religious population in America, the PewResearch Religion & Public Life Project reports.

It’s a way of life for the Rev. Paul Ballien, who’s been the pastor at St. Linus Church in Dearborn Heights for four years. Ballien says it’s a shame that so many opt out of religion.

“The child doesn’t have a basis to fall back on when times get tough,” he says. “And there’s just not this point of view available to them to help them to see the bigger picture of life.” Krikorian, who is raising her 7-year-old daughter Catholic and attends St. Linus, agrees. “I do think it’s important to have some sort of foundation in a higher spirit.”

But with “nones” on the rise, researchers have taken a closer look at the implications.

More and more people are ditching church on Sundays for picnics in the park, so to say, but it wasn’t always that way. In the ’50s, less than 4 percent of Americans grew up in secular homes, Pew reports. Now, the number – which includes those who identify themselves as atheists or agnostics – has hit 20 percent. Of this segment, 14 percent – or 33 million people – make up that “none” group.

Reasons for opting out of religion vary, but Kasprzyk says, “We don’t believe in God simply because we have not seen any places in our lives where religion fills a gap that science cannot.” And Kasprzyk says her kids are just fine: healthy, happy and well-rounded.

The Kasprzyk family follows two golden rules: be good for goodness’ sake, and treat others how you want to be treated. “We believe that humans are entirely capable of living moral and fulfilling lives without any basis in religion,” she says. “We try to teach our children to be open and try to understand all humans and their lifestyles or beliefs.”

While Krikorian agrees people can be good and moral without religion, she feels raising her daughter Kambree Catholic is still a good choice for her family. Religion is a way to teach Kambree about forgiveness, being a better person and more – something she feels is an important part of her daughter’s development. She looks at religion as a tool to teach right from wrong. It’s deeper than that, too.

“Even though I may have had some troubles as a kid, I always knew I could rely on God,” Krikorian says. For Ballien, religion is imperative to a child’s upbringing. “What our faith has to offer us is the answers to the deepest mysteries of our life.”

Still, living without religion has shaped Kasprzyk’s life in positive ways, she says. “We are very open and liberal people. We believe in equal rights for all humans and are quite vocal in those beliefs,” she says.

Ultimately, it’s a personal choice whether you choose to raise kids with religion or without it, and Krikorian feels parents should be non-judgmental about each other’s choices.

On that, perhaps believers or non-believers can agree.

Brought to you by Gateway Pediatric Therapy
Read more
Health