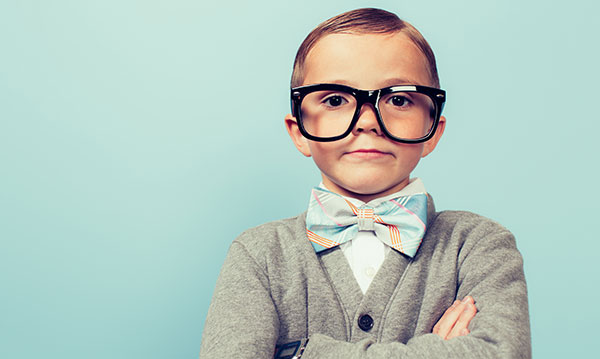 There’s good news for the growing number of women who wait until later in life to have kids: a new study says your children might be smarter because of it.

The study, recently published in the International Journal of Epidemiology, points to the benefits of delaying pregnancy until age 35, Business Standard reports. It’s a major shift from what previous research has suggested, researchers say.

“It’s essential to better understand how these children are doing given that, since the 1980s, there has been a significant increase in the average age of women having their first child in industrialized countries,” says Dr. Alice Goisis, one of the study authors from the London School of Economics and Political Science, in the article.

So what accounts for the boost in smarts? Researchers say it’s less about a woman’s age and more about her characteristics at that age. Women who wait to have children tend to be more educated, less likely to smoke and better established in their careers, for example.

Birth order could also play a role in the results, since moms are now more likely to be having their first child at an older age versus subsequent children – and first children already tend to perform better on cognitive tests, Business Standard reports.

Researchers came to these conclusions after studying three previous UK studies. Data from 1958 and 1970 showed kids born to mothers aged 25-29 scored higher on cognitive tests than those born to moms aged 35-39, but the 2001 study showed the opposite.

The differences between the groups was eliminated when researchers took the mothers’ social and economic characteristics into account, though – meaning those previously-mentioned characteristics of older moms are the most likely cause of the difference, according to the article.

Goisis points out that cognitive ability is an important factor to study since it’s a strong predictor of how kids do later in life, including their education, occupation and health.

“Our research is the first to look at how the cognitive abilities of children born to older mothers have changed over time and what might be responsible for this shift,” Goisis says in the Business Standard story.

Of course, there are risks associated with starting a family later in life – from an increased chance of fertility problems to a higher risk of complications during pregnancy.

That said, this latest study isn’t the first to find the positives of having kids at a later age. In April 2016, another study found that the benefits of being born to an older mom outweighed the biological risks. It found that when mothers delayed having children – even until age 40 or older – the kids were taller, healthier, had better grades and were more likely to go to college, according to Science Daily.

“Expectant parents are typically well aware of the risks associated with late pregnancy, but they are less aware of the positive effects,” one of the researchers concluded.

With all the conflicting information available, women thinking about when to start a family could easily be overwhelmed. But as many women can attest – and this 2013 Los Angeles Times article points out – it’s not always a choice to begin with, anyway. Delaying motherhood might be the only option for women who need time to get established in their careers or make enough money to afford child care or maternity leave.

“If I’d stayed in Europe, I definitely would have had kids earlier,” one older mom is quoted in the article. “But the lifestyle here – I didn’t have time for it.”

What do you think of the new study results? Tell us in the comments.