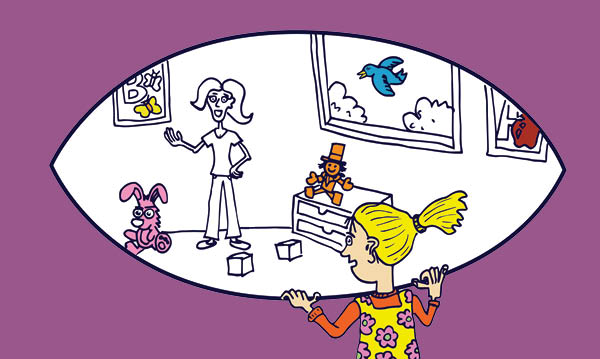 You sign your tyke up for soccer – only to watch him pick flowers and chase butterflies while the ball rolls by. Sound familiar? A new study says that young children’s unfocused attention makes them more aware of the background information. Researchers from Ohio State University found kids ages 4 to 5 outperform adults when tasked with remembering “irrelevant” details. The study had adults and children focus on a specific shape among other random shapes. They found kids better remembered the background details, while adults had only zeroed in on the shape they’d been told to look at.

The good news, the study notes, is that a child’s way of focusing can lead to an easier time acquiring a second language, learning to ride a bike or playing a musical instrument. Lia Shreve, a behavioral psychologist with Henry Ford Health System, says the study supports what she sees with her patients.

“I think that it’s an important skill to have, and that’s why kids are able to learn languages at a very young age,” she says.

For example, she says, some schools offer elementary students Mandarin Chinese – and they become proficient because of their ability to absorb more information, she says. It also translates to kids playing video games, she adds.

“They can pay attention to those irrelevant details,” she says. “A lot of the children I work with have been diagnosed with ADD but when they are playing a game on their cell phone or game system, they can focus for hours. I think that speaks to how they are more attuned to those ‘irrelevant’ details.”

Shreve says children typically get better at focusing on a specific task as they mature, but parents can still nurture the skill.

“It’s important for children to be children, but they have to still be taught to attend to a task,” she says. “I think it’s OK for children to process out the irrelevant information as they get older.”

One way is to use timers when doing homework or a task. Shreve says kids have an average attention span of 15 minutes, so regular breaks are key.

“Consequences and rewards are important, too,” she adds. “They can earn extra TV or video game time. And parents should lead by example, so we need to not be on our cell phones all the time – we need to engage our children in conversation.”

Shreve says kids’ lack of focus is especially apparent during story time, when “children are more focused on the pictures on the page, what activities are going on in the picture or the colors of the pictures than the plot or storyline.” One way to engage kids and hone their attention and comprehension skills is by reading a story then asking the child to explain what the topic is.

When to take action

“I think it becomes a problem when they hit school at 5 or 6 years old and they can’t attend to what’s happening in the classroom or follow directions,” Shreve says. “Then you see symptoms of ADD, ADHD or ODD – oppositional defiant disorder.”

Shreve says each child is unique, so the solutions for behavior problems might be a mix of therapy, medication and parent management training. She says the key is to have parents involved, so when a child has an issue, it can be readily addressed. For example, sometimes, Shreve adds, kids pick up on things that can lead to bullying. If children perceive non-typical gender identity or non-social behavior in other kids, in some cases, they might pick on those kids for being different.

“You have to be engaged in your children’s lives,” she says. “They have to know they can lean on you for support, and if there’s an issue you have to meet it head on.”

If you want to join the fight to help end gun violence, start with these organizations.
Read more
Advice

From boogers to pen caps, here's why some kids can't seem to keep strange and stomach-turning things out of their mouths.
Read more
Parenting