Drop an 'f' bomb or scream 's---!' when you step on a Lego in the living room? Cut yourself some slack for occasionally swearing in front of your child. 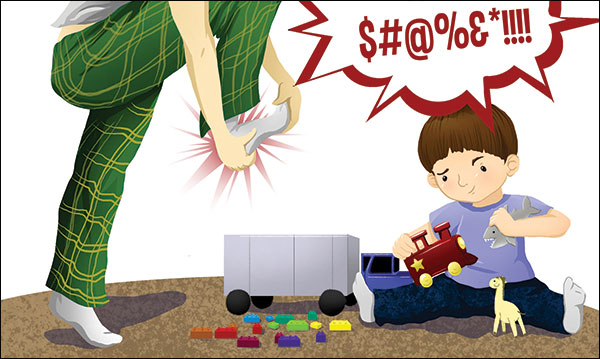 F— is my favorite word – one that rolls off the tongue too easily. But when I was expecting my first child in April 2017, I was told I needed to curb my cussing. Swearing in front of your child, after all, isn’t the best habit.

I mean, what if my kid’s first word wound up being f— or s—? Was he destined to be a hooligan with a vulgar, maybe even stunted, vocabulary?

Well, the answer is no. In fact, there’s no scientific proof that exposure to profanity causes direct harm to children, says Benjamin K. Bergen, a linguist and cognitive scientist at the University of California, San Diego and author of the book What the F: What Swearing Reveals About Our Language, Our Brains and Ourselves.

Nor does it cripple language. In a 2015 lab study where college students took verbal fluency tests – including one where they had to say as many swear words as possible in a minute – they actually scored higher if they were more proficient swearers.

Researchers aren’t sure why, but it’s clear cussing isn’t always a con.

And for kids growing up? “The more they hear it, the less impact it’s going to have,” he says.

That doesn’t mean you should swear like a sailor. But cursing instead of forbidding certain words causes them to become less taboo over time.

“If we just ban the language entirely, we’re basically giving an abstinence-only approach,” Bergen says. It doesn’t work for alcohol and sex, and it’s really just counterproductive, he adds.

“We are basically saying these words are so powerful, so strong, that we won’t tolerate them in our home.”

That’s what gives them power, he says – not simply the swearing in front of your child itself.

That said, not all swearing is created equal.

“There’s a massive difference between swearing and swearing at someone,” says Steve Meerschaert, a counselor with Ascension Brighton Center for Recovery. The latter is verbal abuse, which has a powerful psychological impact.

Slurs are among four categories of swearing, Bergen says, alongside religious terms and words relating to sex and bodily functions. Of these, he says, only slurs negatively impact a child.

When kids start to see themselves as “better” or “lesser,” Meerschaert says, that’s bad – and “a difficult imprint to in any way erase.”

When children are young, they tend to mimic everything, Bergen says – as he quickly noticed with his own son. “As soon as he started echoing things back to us, we found ourselves censoring ourselves a bit,” he says.

Around age 5, Meerschaert says, kids are able to understand the effects of words, so you can explain the difference between swearing at home and outside of it.

Think your swearing impacts your kids most?

Think again. As they get older, kids are more likely to pick up nasty vocabulary on the playground.

In his book, Bergen writes, “Profanity is different from mama and bottle and other words that kids learn from their parents in that children use it as a way to show who they are – to forge their own identity.

And for most kids, a lot of their identity is wrapped up in their relations with their peers.”

If you stub your toe and yell, “s—!” don’t fret, Meerschaert says. “It’s mostly about context. The child will see mom getting hurt and will see that as an unusual circumstance.”

Still, he or she will be curious, so explain why you swore – because that sort of emotional reaction is going to get kids’ attention, Bergen says.

Want to convince kids that public swearing is a no-no? Meerschaert says some respond better to the “do as I say, not as I do” rule than others.

If a child swears at home, Bergen says, there’s no benefit to making a big deal out of it. It’s like tantrums.

“If you react with a strong emotional reaction, they are going to learn to manipulate mom,” he says. “The only bad thing about using these words is that other people have a negative judgment of it.”

So give yourself a break if you drop that “f” bomb.

“There are many things that parents concern themselves with,” Bergen says. “Maybe this is one we don’t need to worry as much about.”