Teaching Kids How to Sew a Button

It's the basic, most necessary type of mending. Don't know how? Don't worry, parents. Our handy guide shows you the ropes – rather, threads! 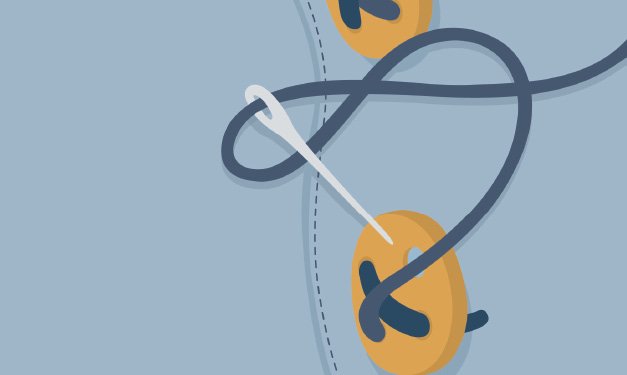 Sewing on a lost button is like doing your taxes – it’s inevitable, it’s a hassle and not doing it makes you look like a delinquent. Nobody looks good with a gaping hole in his dress shirt or a safety pin holding up her pants.

But reattaching the wayward button is easier said than done. If you’re like me, you never learned the proper way to sew on a button, resulting in a lot of quick fixes and, ultimately, a lot of charity donations.

Paying a dry cleaner to sew on the button doesn’t cost much – usually between 50 cents and a dollar – but the real investment comes from gathering it up and remembering to take it in. Save yourself the hassle by following these instructions from Anne Reinstein, owner of All Sewn Up Sewing School in Ann Arbor, to reattach your own buttons.

Show your little one the steps and have them help. It’s a simple way to introduce them to sewing – which, according to Reinstein, is a skill that will always serve them.

“Even if they don’t fall in love with sewing, they will always have the tools they need to quickly stitch a seam closed or reattach a lost button,” she says.

Reinstein learned to sew in middle school at age 13, but says children can start as young as 6.

“They need to be able to sit still for longer periods of time,” she says. “In my experience, children under 6 have a harder time with that and enjoy the task less.”

Ideally, you have the original button that you are reattaching. If not, the manufacturer usually includes extras sewn on the inside of the garment. Still out of luck? Find a button of the same size and color at a fabric store.

There are a few kinds of buttons – the four-hole, the two-hole and the shank. The shank button is usually a more decorative button that doesn’t have any holes, but one loop on the back.

Find a thread that matches the color used on the other buttons. All-purpose thread will work for most jobs, but for a thick winter coat, use a heavy button thread.

Cut a length of thread that’s twice the length of your arm. Threading the needle can be tricky. Try licking the end first to make the thread stiff. If that doesn’t work, run the loose end over a piece of wax or a wax candle for the same effect.

Trim the end to make sure it’s crisp and not fraying. The thread should slip right through. It may take your kids a few tries, but encourage them to go slow and keep at it.

Once the thread is through the eye, tie the two ends together, knotting them twice.

Line up the button on the garment. If you’re reattaching the button, this will be easy; just look for the old needle holes.

Starting from the inside of the garment, anchor the thread to the garment by sewing two small stitches behind where the button will go, ending with the thread back on the inside.

Remember: When attaching a button, you can’t affix it so tight that it doesn’t move. It needs to have enough slack to be buttoned into the hole on the other side of the garment.

(If you’re tackling a trickier heavy coat, you might even want to place a pencil or similar object between the fabric and button and sew around that, to allow proper spacing.)

Repeat this five or six times and finish off with a double knot on the inside of the garment. Trim off the excess thread.

You may be worried about giving your child sharp needles to play with. However, Reinstein is confident you have nothing to worry about.

“Make sure your child understands beforehand that the needle is sharp and that she should be extra careful with the tip,” says Reinstein. Your child will probably get poked a few times anyway, but it’s nothing a few mommy kisses won’t fix.

Never allow your child to put a needle in her mouth (you shouldn’t do this either, Mom), and always put everything away when you’re finished. If you misplace a needle, try sweeping a magnet over the area to help find it.