The Riley Katheryn Foundation, started by a South Lyon family in honor of their daughter, assists families in paying for their child's funeral costs. 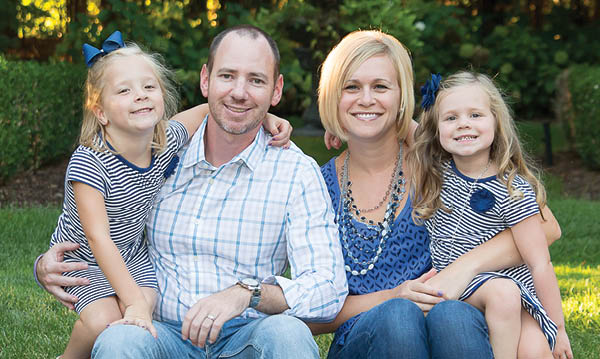 For Katie and John Rohrhoff of South Lyon, Nov. 3, 2009 is a significant day. They celebrated the birth of daughter Payton Grace. But her identical twin sister, Riley Katheryn, was stillborn. With tragedy came an outpouring of support, mom recalls. “We were overwhelmed by how much our family, friends, neighbors, the hospital, our community – even strangers – did for us.”

Now, the Rohrhoffs are helping families who also have lost a baby with the Riley Katheryn Foundation, a nonprofit they started in 2015 to assist with funeral costs. This month, on March 19, 2016, it holds its second fundraiser to continue its cause.

“When we had our loss, we didn’t know what to do,” Rohrhoff says. “It wasn’t anything expected.” In their case, the hospital recommended Lynch & Sons Funeral Home in Walled Lake, which doesn’t charge for infant funerals – though that’s not the case everywhere. But there were still costs, like a casket and grave marker.

“You shouldn’t have to worry about paying for their final expenses,” Rohrhoff says, which “can add up to thousands of dollars.” So far, RKF has helped seven families across Michigan. Rohrhoff says she stays in touch with most of them.

The foundation works through funeral homes. It provides up to $500 to Michigan families who have lost a child under 1 year, with hopes of expanding that reach.

Riley is still a big part of the Rohrhoffs’ lives. They keep her memory close with Payton, now 6, and younger sister Morgan, 4. “Now, having the foundation makes it a more everyday experience,” mom says.

Katie Rohrhoff is also a facilitator for Helping, Understanding and Grief Support, or HUGS. The free support group, which helped her during her loss, is open to anyone who’s experienced a miscarriage, stillbirth or infant death. It meets at 7 p.m. third Thursdays at Huron Valley-Sinai Hospital, 1 William Carls Drive, Commerce Township. More at hvsh.org/hugs.