The Transition from Working Woman to Working Mom

Childbirth isn't the most painful part of becoming a mom. Figuring out maternity leave, going back to work and balancing family and work are challenging. 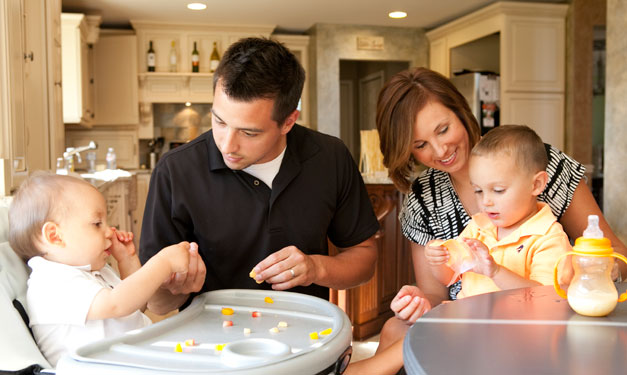 Meg Berger of Huntington Woods planned her first day back to the office after 12 weeks of maternity leave for a Wednesday. This way she would have only a three-day work week ahead of her before the respite of the weekend with her 3-month-old twin boys.

“My mom watched the kids for me that first day back, and she sent me pictures throughout the day,” recalls Berger, a secretary for a union. “I’d cry every time I opened a new one.”

While Berger proudly wears the badge of working mom, she also wears its common accompaniment – guilt.

“The hardest for me is Monday mornings after we’ve had the whole weekend together,” says Berger whose now-7-month-old boys are starting to experience separation anxiety. “They’re beginning to realize when I’m not there, and they get upset when I leave.”

To combat the guilt and sadness she feels leaving her boys, Berger keeps herself focused on what working provides her family, including important medical benefits.

Some moms work from home while caring for their kids. Do they have the best of both worlds?

“I know that they won’t be scarred by my time away from them,” she notes. “They’ll just know that I was working for them.”

And research is on her side. A recent study by the Academy of Social Sciences in the U.K. shows that children’s literacy, math ability and behavior are not, on average, affected by whether their mother works outside of the home. These findings are the result of six studies that followed 40,000 kids over four decades.

“The research evidence reflects many changes over the last 40 years,” said professor Heather Joshi of the Centre for Longitudinal Studies, Institute of Education, University of London, in a university report. “There has traditionally been a concern that the employment of mothers comes at the expense of child development. But as the percentage of mothers in work has gone up, any impact on children has diminished.”

These findings and the fact that it’s become so common – and commonly accepted – for mothers to work outside the home should make it easier for working women to start families and continue their careers. And yet it’s not that simple. Work-leave policies and financial realities don’t always afford new moms as much time as they need to bond with their babies before heading back to work. In short, Monday mornings aren’t just hard for Meg Berger. They can be bittersweet for many moms who struggle to find a balance between their responsibilities to their growing families, their employers and even their own ambitions.

According to a study from McGill University’s Institute for Health and Social Policy, the United States is the only industrialized nation not to mandate paid maternity leave. The U.S. is in the company of countries like Lesotho, Papua New Guinea and Swaziland in this regard.

Stacey Longo of Macomb Township was thankful to have the 12 weeks unpaid maternity leave afforded her thanks to the Family and Medical Leave Act (FMLA) when she gave birth to son Gianni two years ago and son Luca 15 months later. While she did receive some paid leave during that time, she is in the minority – as U.S. employers are required only to provide 12 weeks of unpaid job-protected leave. And that is only if they have 50 or more employees. And if the employee has worked at least 1,250 hours during the previous 12 months. According to a survey performed by the Society for Human Resource Management, only 16 percent of all American companies offer some form of paid maternity leave.

2013 marked the 20th anniversary of the passing of FMLA, the first bill signed into law by President Bill Clinton in 1993 – and the piece of legislation he says more people have mentioned to him both while in the White House and in the years since than any other piece of legislation.

“People desperately want to have successful families, to be good parents and to have a job and succeed in it,” said Clinton at a February event at the U.S. Department of Labor marking the FMLA’s two-decade mark. “If you take one away to get the other, the country pays a grievous price, and every life is diminished.”

The labor department reports that FMLA has been used more than 100 million times by workers managing personal circumstances since its debut. In the last year alone, 10 million workers took advantage of job-protected leave guaranteed by FMLA. However, a department’s survey indicates approximately 40 percent of workers do not meet the criteria necessary for coverage and eligibility.

While Erika Oddo of Clinton Township was eligible for FMLA when she gave birth to her daughter, she could afford to take only six weeks off, as none of her leave would be paid.

“I wasn’t ready to go back after six weeks,” she recalls. “But I had no choice.”

At the six-week mark, Oddo’s baby girl was still waking up multiple times each night. It was also right around this time that doctors diagnosed her infant with an allergy to cow’s milk, and, since that can be passed on through mom, Oddo had to abruptly cease breastfeeding.

“My daughter hadn’t been taking a bottle before this time, and now she had to,” Oddo recalls. “She fought me, but we had no choice but to transition her.”

Thankfully, Oddo was able to leave her daughter in the care of her sister, making the transition back to work a little easier. She admits she was emotional over leaving her daughter at such a young age.

“She was just so small,” Oddo says.

By the time Oddo gave birth to her son six years later, she was working elsewhere and able to take advantage of short-term disability, enabling her to take a full 12 weeks of leave with some pay.

“Honestly, I don’t feel that three months is even enough time with your new baby,” she says.

Generous as these maternity leave policies may be, they pale in comparison to those standard in countries like Sweden, where parents are given 480 paid days per child to be shared between them and used any time before the child turns 8.

Researchers Jeanne Brooks-Gunn, Pinka Chatterji and Sara Markowitz analyzed data from the National Institute of Child Health and Human Development’s Study of Early Child Care and Youth Development, or SECCYD. Among other things, they looked at maternal health and stress upon returning to work after having a baby.

“The results suggest that the transition back into employment immediately after childbirth is difficult for the average family, detracting from maternal health and increasing self-reported parenting stress,” write the authors. “These findings emphasize the need for parental leave policies that allow new parents to take longer leave and/or work fewer hours in the first few months after childbirth.”

Local moms are using what leave they can to maximize bonding time with their new baby while also preparing for their new role as working parent. Some employers are making extra efforts to make that transition a smooth one. That includes Valassis Communications in Livonia, which was named to Working Mother’s list of the top 100 companies in 2012.

“We try to help ease people back into work after having a baby,” says Leslie Lenser, Valassis’ senior vice president of human resources. “We offer people the option of coming back part-time if possible or to work from home for a certain amount of time. We sometimes allow employees to shift their hours around, as well, as they transition back.”

Other niceties for new moms and dads include a brand-new car seat for each new baby, a $600 dependent-care spending match, and six family rooms across Valassis sites that parents can use if their child care falls through or school is out due to inclement weather. The rooms have a TV, games and other activities for the kids.

Katie Kramer, a communications specialist at Valassis and mom of a young daughter, loves that her employer arranged for a salon in the building, so she can get her nails or hair done during her lunch hour rather than during time off she could be spending with her daughter.

Using lunch hours to get things done is a specialty of Stacey Longo. She regularly uses the time to run to the bank or to the store.

“I get one hour for lunch,” says Longo, who is an administrative assistant. “I use that time to get stuff done that’s annoying to do with the kids because I’d have to get them in and out of the car.”

Berger too admits she enjoys a solid hour of alone time to eat her lunch in the welcome quiet – circumstances entirely unlike those in which she eats most meals at home.

Longo found it a lot easier to go back to work after her sons’ births than she had initially thought it would be. With her boys spending two days a week in day care and the other three with family, she knows they are in good hands.

“I know it is good for the kids to get used to other people watching them,” she says. “We’ve all adjusted just fine.”

Even so, Longo does sometimes experience a little bit of guilt.

“I feel bad that when one of them is sick, I have to call their grandparents to help out,” she says. “But on the other hand, I like that working allows me to put my education to work. We couldn’t have bought the house we’re in now – our forever home – if I wasn’t working.”

For inspiration, Longo looks up to other working moms she knows, most especially her own mother.

“My mom was a working mom, and we went to day care,” she recalls. “It never seemed like my mom couldn’t do it. My parents were able to pay for us to go to college. Their working provided a lot for us.”

Longo knows that her 9-to-5 is affording her boys the same gifts.

“My advice to other working moms or those expecting is to let go of schedules,” she says. “I get home at 5 p.m., and my kids go down by 8. Those few hours, I focus on them. Too bad if the dishes are piled up in the sink and the laundry is not folded. Enjoy the quality of time with your kids versus the quantity.”

And take a little time for yourself, Longo advises. For her, that means putting her feet up with a bowl of ice cream to watch her favorite television shows with her husband after the boys go to sleep.

Meg Berger and her husband went out of town for a wedding in August – the first trip away without their sons.

“We were nervous but also excited,” she says, acknowledging that the adults-only weekend provides some much-needed reconnecting time for her marriage.

For her part, Longo cherishes the time date nights provide for her family to grow and keep the love alive.

“It’s important to have a time to talk – aside from the ‘throw me a paper towel’ conversations that take place during the dinner craze,” she says. “So my husband and I plan our date nights, even if only a trip to our favorite grocery store!”

It's totally natural but can be an uncomfortable thing to address with your son. A local expert offers advice on how to handle boys' wet dreams.
Read more
Sponsored Content