5 Things to Teach Your Kids About Fires

Do you know how to handle a fire? A fire chief in metro Detroit explains parents' roles in teaching children and keeping their families safe. 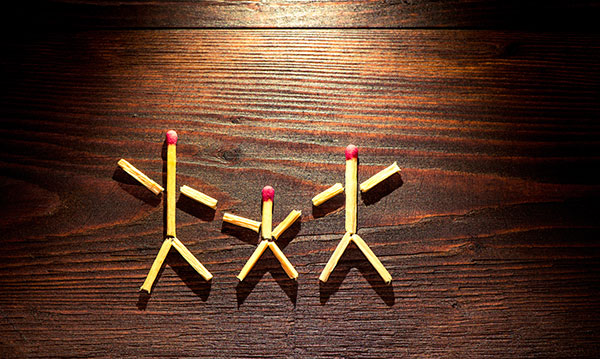 In 2014, there were nearly 1.3 million reported fires in the United States, according to the National Fire Protection Association. Every 85 seconds, a house fire was reported. It’s scary to think about, but important to educate children on fire safety.

October is National Fire Prevention Month, making it a great time for parents to teach kids about properly reacting in the event of a fire. Here, a local fire chief discusses steps parents and children can take when it comes to fires and fire safety.

There is a difference between good and bad fires, says Dan Besson, fire chief of the Van Buren Fire Department in Belleville. A good fire is controlled and supervised by an adult. Campfires and torches in land fields are examples of a good fire. Bad fires are unattended. When it comes to good fire, an acceptable age to allow children to create a campfire is 11 years old, Besson says, as long as it is supervised.

EDITH stands for “exit drills in the home.” Besson advises parents to practice it with families by allowing children to draw a map of the house. Ask them to put where the emergency exits are on the map. Give the child a scenario – if the fire is in the bathroom draw which door we should go through to escape.

Walk the children through the house and show where the exits are. Creating a drill and acting it out helps children become familiar with the routes to escape. A father of two kids, ages 11 and 13, Besson frequently works with his children to understand EDITH. He adds children are never too young to learn about fires. It is just as important as knowing protocol to notify police of an emergency.

Not only are children less familiar with fire extinguishers, so are the parents, Besson says. Parents consistently walk passed extinguishers at work without paying attention to where they are located. “It’s a learning experience for (everyone),” he says.

You can purchase extinguishers of all sizes for various rooms. The right age to teach a child how to use one depends on the parents.

When using it, remember the word PASS, the National Fire Protection Association notes:

Some fires are small and some are too big to handle. When it’s difficult to manage, escape the house immediately. Besson says choosing a meeting spot prevents less deaths and injuries. If the child is unaware of where to meet, they run the risk of getting caught in the fire. This triggers the parent to go back in to rescue him or her, Besson says.

“Parents could die if they don’t have a meet-up point,” he says.

If a child or parent is stuck in the house, they can run to a room, place clothes under the crack of the door and open the window for ventilation. Besson says purchasing an escape ladder also helps.

Remember, if a child’s clothes catch fire, they should remember to Stop, Drop and Roll. Teach them to cover their face with their hands, drop down and roll until the flames are out.

“Parents understate the ability of children,” Besson says. Children easily pick up items they are not supposed to. Approximately 7,100 homes burned because a child played with fire between 2007 and 2011. The fires resulted in 77 deaths, 750 injuries and $172 million in damages.

Besson advises parents to sit down with the children and explain the dangers of matches. If you see a child with a lighter or match, take it away. “Take the curiosity away,” Besson says

The biggest cause of a fire in homes is kitchen fires, he says. He adds grease fires are the most dangerous because families are unsure on how to put them out. If a child cooks with grease, it’s best to supervise or cook with him or her. Never put water on a grease fire, he adds. It ignites the flames and spreads through the house. Place a lid on the pan and remove it off of the burner.

Plus, children own various electronics that needs to be charged, so be sure to show them how and where to plug their devices. Never plug an extension cord to another extension cord.

“Parents need to have a big impact in reinforcement,” Besson says. “Have a solid (teaching) foundation.”