This mom declares, "The Instant Pot changed my life!" Find out what she has to say about the perks of this time-saving kitchen cooking appliance. 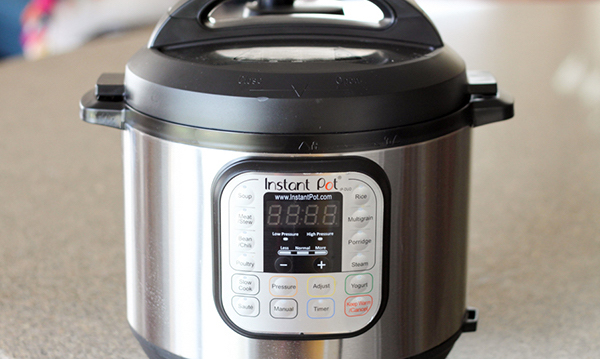 “It sautes. You can use it as a slow cooker. And a pressure cooker. I made chicken last night in nine minutes. Nine minutes!” My friend kept gushing about the Instant Pot, while I teased her about sounding like an infomercial. Little did I know I’d soon be sharing her very sentiment: “The Instant Pot changed my life.”

What intrigued me about the Instant Pot (IP, for those in know) was all the different functions. I’d been in the market for a new rice cooker since the one I bought in college years ago started showing its age and churning out burned rice. As long as I needed a new rice cooker, what about one that could do more?

After all, the last thing I wanted is another big kitchen device – my Cuisinart and Vitamix blender are already fighting for space under one of my cabinets. If I could swap out my Crock-Pot and rice cooker for one device, I was all for it.

On a whim, I bought my Instant Pot on Amazon one evening and it arrived the next morning.

So what exactly is an Instant Pot?

The device itself is about the size of a Crock-Pot but taller and feels very similar – it plugs in and has a removable pot (for easy cleaning) and a lid. Mine also came with a wire insert.

We have Canadian tech gurus to thank for this nifty device, which first appeared in 2010. Their goal was to invent “solutions that would enable busy families and professionals to prepare quality food in less time,” according to the Instant Pot “about” page.

Based on Instant Pot’s popularity, they succeeded. It’s fueled an underground cooking trend with a zealously devoted following. And I’m now among them.

Here are some of the ways I feel Instant Pot changed my life – so far.

One of the most unexpected surprises? The Instant Pot expanded my stovetop space. I know, I know it’s in the title – instant pot – but I’d really only thought of it as a rice cooker or pressure cooker, figuring I’d use it about as often as I do my slow cooker – once a week. Instead, I’ve been using it daily.

It’s great to press a button and know my rice will come out perfectly, and be kept warm, while I’m cooking the rest of my meal on the stovetop. I feel like I have an extra burner.

The saute function has also become my BFF. I put the oil in and then it beeps when it’s ready for me to put in chopped onions or whatever I happen to be cooking. No more guesswork on how hot the oil is.

I find most people, myself included, are most interested in its pressure cooker function, which cuts cooking time and helps you avoid becoming a “pressure cooker fail” (Google the images – it’s not pretty) since it has several safety features.

Growing up, my mother had a pressure cooker she used to make beef roasts or beans. But her stovetop version looked a bit like a torture device and acted like it as it spewed out steam. My mother never approached it without heavy duty oven mitts on both hands.

That’s not to say the Instant Pot can’t be dangerous: If you do a quick release, the steam will still jut out of the valve and the lid will be hot.

One less kitchen appliance taking up space in my cabinets! But here’s something I didn’t see in many of the reviews – that whole “instant” part – it’s not quite how it goes. Sure, you can cook the chicken in nine minutes, but first the pressure cooker needs to come up to pressure, which depends on the food you’re making, the amount – there’s no hard and fast rule.

In other words, you program in the nine minutes or hit the “rice” function and then it goes to “ON” and you’re left wondering when it’ll start counting down the minutes. Plus, once the food is cooked, you have to wait for it to release pressure naturally or you can do a quick release.

I still will take my Instant Pot any day over my Crock-Pot (that’s now been relegated to storage in the basement), but if you’re thinking your chicken will be done in under 10 minutes, that’s not exactly true.

You’re already raising smart kids. Now, you can boost your dinner’s IQ, too – because Instant Pot has a mind of its own. Literally. You can use the manual program to select the timing for your food or you can let the IP do it for you. I simply add rice to the pot and water in a 2-to-1 ratio, close the lid, push the button and walk away.

Same goes for meat or oatmeal. I don’t have to know the right cooking time. I will say, be ready to read the manual (and it’s sizeable) before you begin. There’s a learning curve for cooking with the Instant Pot – and at first all of the buttons and programs can be a little intimidating.

I’d been in a little bit of a cooking rut lately. With the Instant Pot I’m trying new kid-friendly recipes and tapping into a community of other cookers who are equally interested in trying new dishes (well, some are a little bit more dedicated than me – I still haven’t made yogurt or cheesecakes yet, although both require additional parts).

I also like how the Instant Pot infuses food with flavor. The slow cooker tends to suck the flavor out of whatever you put into the pot, turning out mushy meat unless you find just the right timing. Not so with the Instant Pot. Barbecue pulled chicken comes out meaty and delicately sauced, and dishes that usually take hours to get that slow-simmer, deep flavor are done in minutes, like this spaghetti bolognese.

I’ve certainly had some fails – I love copycat restaurant recipes, but that Panera’s broccoli and cheddar cheese soup didn’t come close to the real stuff – but I’m still learning.

Hey, parents: Have something you’re obsessed with, too? Share it with us for a chance to win $25. Get the details on the My Obsession page.