What is Attachment Parenting? What are the Pros and Cons? 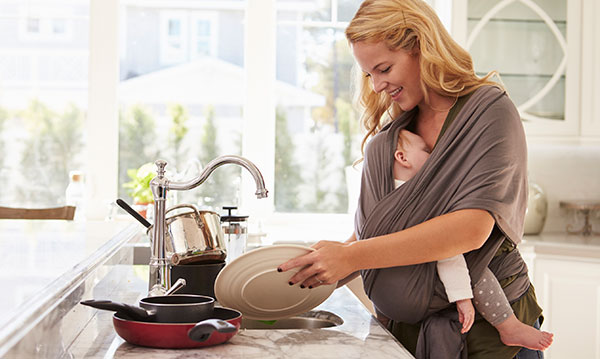 Farmington mom Jess Sanchez McClary didn’t plan on practicing attachment parenting with her twin boys before they were born. As it turned out, breastfeeding, bedsharing, babywearing and other ways of staying tuned in to her babies just came naturally.

“I think that I kind of evolved into it,” says Sanchez McClary. “It just kind of became the way that I parented them from the beginning. I didn’t identify it as something until they got a little bit older.”

Co-sleeping was more convenient for life with twins and it made breastfeeding at night easier, too.

“They slept better, fussed less. When they woke up to breastfeed it was a thousand times easier,” she describes. “It just made sense.”

With their sons now 6 years old, she and her husband are more confident than ever that attachment parenting is right for their family. The boys weaned on their own at age 3, still find their way into mom and dad’s bed by morning most nights and they’re homeschooled – often seen as a progression of attachment parenting, though Sanchez McClary always planned on homeschooling.

“It just made more sense for us to do what they felt was necessary for their development. You are becoming an individual and figuring out the world around you, why don’t we let you feel your way through?” she says, pointing out that her kids never had security items they clung to (they had “each other and us,” mom says). “It’s creating a very good outcome for us.”

What is attachment parenting?

According to WebMD, attachment parenting “focuses on the nurturing connection that parents can develop with their children.”

“That nurturing connection is viewed as the ideal way to raise secure, independent, and empathetic children,” the site explains, adding that the practice has been boosted by notable pediatrician and author Dr. William Sears.

Barbara Robertson, an International Board Certified Lactation Consultant and the owner of the Breastfeeding Center of Ann Arbor, says attachment parenting “comes from families wanting to feel in tune and close to their children and their babies.”

“This is a normal feeling but our society doesn’t support it very well. Sometimes we make fun of it, sometimes we actually forbid pieces of it such as bedsharing,” she says. “I think it really has come as a response to the ’50s when they were talking about you should never spoil a child … (babies spent) lots of time in playpens, breastfeeding was certainly on the out.”

The Baby Book by William and Martha Sears, plus resources like Attachment Parenting International, help give parents a guide. But for many parents – just like Sanchez McClary – it starts with doing what feels right.

“A lot of people end up attachment parenting because their babies are really born into this world expecting to be breastfed, expecting to be held all the time, expecting to sleep with their parents,” Robertson says. “When we give them what they expect they grow up to be healthy human beings. When babies cry it should make us really upset. Our job is to pick them up and comfort them.”

Benefits of these practices extend to children’s behavior and their physical and emotional health, she says.

“One of the biggest benefits to attachment parenting is that you learn to trust your child and your child learns to trust you,” Robertson adds. “And being a mother of a 21-year-old and a 17-year-old, it lasts a lifetime. I can look at my kids and I know if they’re OK or they’re not and they come to me and they tell me things.”

Attachment parenting can also save parents money if they aren’t buying things like formula, a crib or a stroller.

While Robertson says children only stand to benefit from attachment parenting, moms and dads often face negative feedback for their choices.

“I think one of the biggest cons is that unless you live in an area where attachment parenting is common, it’s very hard because the rest of the culture is pressuring you to behave the way that they do,” she says. “That might mean that the baby sleeps down the hall in a crib, formula feeding, being in a car seat all the time.”

Those who practice attachment parenting are also prone to self-judgment.

“Make sure you don’t feel like you’re judging yourself. Let’s say that you fully intended to breastfeed but something went terribly wrong, or you intended to have a natural birth and you ended up with a cesarean section,” Robertson says. “Remembering that it doesn’t have to be perfect. Being a good parent is exhausting, that’s a fact – no matter how you do it.”

While the lack of paid parental leave in the U.S. can mean going back to work earlier than you’d like, Robertson says plenty of working moms and dads practice attachment parenting.

“I work with lots and lots of mothers who go back to work … and they’re not ready. Financially it’s just not an option for them and so they end up having to go back to work earlier than they want,” she says. On the upside, “You can pick a childcare provider who supports these ideas and when you’re home with the baby you can still practice those ideas.”

It’s not “all or nothing”

Attachment parenting isn’t an “all or nothing” approach, Robertson points out.

“You can be very creative with this. Take the parts that work for you and leave the rest behind. It’s not like a cult,” she laughs. “Some babies don’t want to be cuddled all the time, some babies need their personal space. I’ve always felt like being respectful to the baby is really a key aspect, kind of following their lead.”

And parents should know this: “There’s no one way to raise a baby. It’s OK to take parts from one practice or philosophy and take parts from another and incorporate them to make what works best for your family.”

Sanchez McClary agrees that the bottom line is doing what’s best for your family – not what others think is best.

“Every child has their own personality,” says local mom Sanchez McClary. “I’ve met people’s children who are very independent … they’re not looking for that same kind of closeness.”

She says she’s happy to explain why her choices work well for her family but it doesn’t mean it’s best for anyone else, she says. “It is literally your only job as a parent to decide what is best for your child because you know them better than anybody else.”