Why Babies Drop Objects and What to Do

A Henry Ford Health System pediatrician weighs in on why this happens, how long it lasts and what you should do. 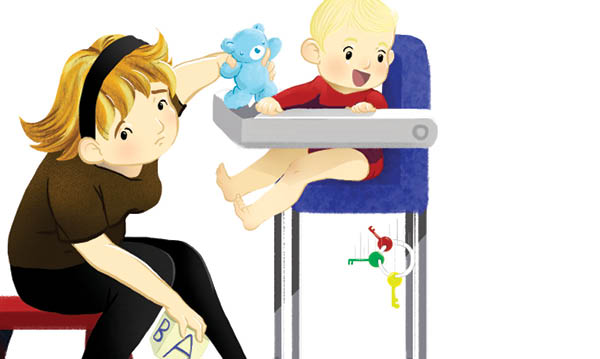 Around 6 months old, babies start to delightfully drop objects — on purpose. This can be annoying for parents but it’s actually important for tots to do. They may drop food, toys or anything they can get their hands on. The good news is they’ll grow out of it eventually. In the meantime, here’s the scoop on this phase.

“It partly has to do with the fact that they can drop things,” says Dr. Bridget McArdle, a pediatrician with Henry Ford Health based in Sterling Heights. “Their reflex for a long time was to grasp things in their hands.”

Since babies are discovering this new skill, they’ll want to test it out over and over again. It’s a game for them.

Babies also are developing something called object permanence, says McArdle. “They are realizing that things are still there even out of sight. They’re getting an idea of how the world works around them.”

Remember when your baby cried every time you were out of her line of sight? That’s because up until around 6 months, babies don’t realize that things continue to exist outside of their view.

Once they start realizing it, they want to purposefully put things out of sight to see what happens. Usually someone picks up the object and gives it back — over and over again.

Should you pick it up?

In short: Yes. “If you’re at home, there is no harm to just keep picking it up.”

There are some situations where it might be disruptive, though, such as at church. In those circumstances, McArdle suggests giving your child a plush toy to drop because it doesn’t make noise.

But at home, there are plenty of things to do with babies to help them physically and mentally.

“In terms of fine motor skills, give them different objects to drop,” says McArdle. They can explore different shapes and weights, and it can be a fun learning experience for them — as long as the objects are safe for play. They’re not yet old enough to learn about gravity, but they’re on their way to it.

This is also when babies can start playing peekaboo, because they now recognize something is behind the blanket or towel. It helps them developmentally and it’s fun, too.

“Babies are exploring the world. They want to touch things, taste things and, of course, see things,” says McArdle. It may get a bit pesky but remember that they have to learn everything about the world around them, even the simplest things.

And luckily, it’s only a phase.

How long does it last?

“Usually only six to 12 months,” McArdle says. Babies keep it up until they’re bored or understand the word “no” — which, McArdle says, is around 1 year.

Once they know what “no, don’t do that” means, you can say this to them when they drop things, especially if it’s disruptive.

Before then, telling little ones “no” may only confuse them when they are dropping things, especially since they don’t yet understand why it could be annoying.

Remember, they grow out of it, so it won’t be a problem for long. Just keep letting them learn how their new world works.