Why Your Child Fears Inanimate Objects

Does your child have a fear of the coat rack or shadows on the wall? Learn why kids' imaginations might be giving them a fright. 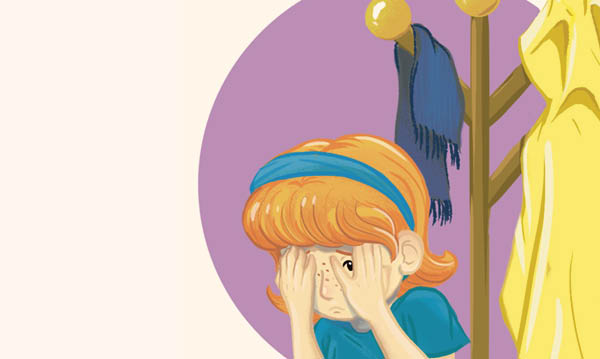 Has your child become a human pillow in your bed because he fears the monsters in his head? Between ages 5 and 9, kids “have a hard time distinguishing between fantasy and real life,” says clinical psychologist Eric Herman with DMC Children’s Hospital in Detroit. “When you’re super little, you don’t have a clue.”

Once abstract thinking kicks in, “They can turn a coat hanging on a rack into a person,” for instance. But fear not! Here’s how to help.

How kids see it

“Kids aren’t afraid of objects, per se,” he says. Perception really is key. In the dark, for example, furniture or a rumbling refrigerator can turn into something scary. (Incidentally, while Chucky may excite horror film fans, Herman says he’s never met a child specifically afraid of dolls.)

It evolves, too. “As they get older, their minds expand and they become more aware of what’s going on.” They may watch the news and not understand why a burglar breaks into one house and not theirs. They don’t have the deductive reasoning to debunk UFO abduction theories. Absent information can generate fear, too.

Oftentimes, they project these anxieties onto inanimate objects, Herman says.

“I think the first thing you have to understand is their age,” Herman says. “You can’t rationalize with them like you would an adult. Ask about their worries,” he says, instead of telling them there’s nothing to fear. Explain that our imaginations create stories, and the stories can be scary. “Help kids to understand that just because you can imagine a monster, doesn’t make it real.”

If your child fears the dark, plug in a nightlight. If he fears creeping shadows, maybe ditch the nightlight. Leave the bedroom door open, or keep it closed if the groaning of the house fuels his anxiety. If she fears monsters in her closet, keep the closet door open. And before bedtime, urge your child to put away anything that scares him or her in the dark, Herman says.

“Avoid growing the problem,” Herman says. “I’m for one nightlight.” In rare cases, phobias become clinical when parents overindulge. Want to teach your kid there’s no such thing as monsters in their room? “Don’t pretend like there’s a monster in their room,” he advises.

Reassure kids you wouldn’t let them sleep in a house where harm runs amok. Then, “they have to learn their own mind,” he says. It’s convenient for tired parents to let a child snuggle up with them in bed, Herman adds, but don’t cave in.

“Parents will give in until it becomes a huge problem, and then they end up talking to someone like me.”