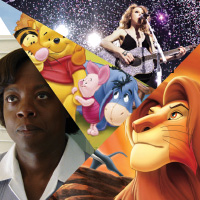 It's more than the weather outside that's frightful. How about them malls? To make last-minute shopping trips easier on you, check out these new for 2011 DVD/Blu-ray releases. They're some of the year's best. And if you act today (that's Dec. 20), you can still snag them on Amazon.com and get 'em by Dec. 24 – without leaving your home. (If you do wind up venturing out, just be sure to call ahead to make sure they've got what you need.)

Remember the thrill, the tears and the fuzzy feelings that came along with The Lion King upon its first release 17 years ago? Of course you do. You don't forget a movie this good. Now Lion King – one of most highly regarded animated films because of its memorable music ("Hakuna Matata"!), lovable characters and inspiring story – gets the royal treatment as Disney lets this classic out of the vault for a must-have combo pack that's not only the best looking and sounding transfer of the film so far (this is its Blu-ray debut) – but really the ultimate edition for special features. New to this hi-def remaster are "Pride of The Lion King," a 39-minute behind-the-scenes documentary, five deleted scenes and a brief animated gag reel that the kids will get a kick out of.

The Help, based on the best-selling book, is more than a history lesson about racial injustice in the '60s; it's a lesson in how just a few people can affect change. Set in the South, the hit film tells the powerful story of a group of black maids (aka "the help") who share their harrowing stories with an aspiring writer. Viola Davis is the standout as Aibileen Clark, the first housekeeper to step forward and lead the rest into rebellion. What she tells the tot she's looking after – "you is smart, you is kind, you is important" – will resonate with you long after the credits roll in this heartbreaking, humorous and deeply touching dramedy. But hers isn't the only role that's awards-caliber: Octavia Spencer as Minny Jackson, a feisty one who shows her racist boss by putting a little extra something in her pie. The Help has all the ingredients for a holiday lift-me-up – and plenty of a la mode: an in-depth making-of, deleted scenes and a "Tribute to the Maids of Mississippi."

There's something special about the simplicity of a Winnie the Pooh movie. Now this generation – and Gen Xers who still adore the little bear with a big belly – can join Christopher Robin's stuffed animals in a new and charming adventure. In this installment, Eeyore's tail goes missing – oh, the stress! – and the gang tries to track it down. With sing-along songs, comedic cracks that don't involve cheap potty jokes and the nostalgia of an animated legend who's still hand-drawn (none of that fancy-schmancy business here, folks) Winnie the Pooh is one of the most delightful family films of the year. And the extras? Let's just say that if all of them – including 15 minutes of deleted scenes, a how-to on making a Pooh nursery by a couple of baby planners and, worth the purchase alone, a beyond-sweet short called "The Ballad of Nessie" – were honey, Pooh's tummy would never rumble.

"My name is Taylor," announces America's singing sweetheart at the onset of her first live release, captured from her 2011 trek and performed here in a CD/DVD combo. If you have kids, specifically tween girls, that introduction is completely unnecessary. Swift, who sings about fairytale love when she's not hating on boys, is a long-distance friend to all her fans, including the thousands at this show on her latest world tour. All 17 performances, including songs-your-kids-play-to-death "Love Story" and "You Belong with Me," are set to fantastical and uber-girly backdrops. She plays up her one-of-us persona with between-song chats and the kind of every-girl demeanor that's earned her so many super fans. Besides the live DVD, there's backstage bonus content and a 75-minute CD of just the music. Swifties will love it.