A teen shares her story of receiving a kidney transplant at Children's Hospital of Michigan to encourage others to join the Michigan organ donor registry. 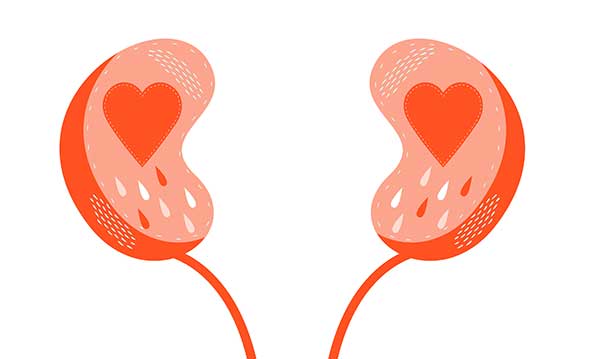 For nearly a decade of her life, A’ja Booth, 18, had been going to Children’s Hospital of Michigan in Detroit. She recalls she couldn’t do much, going to dialysis three days a week for several hours at a time. It was stressful leaving school early regularly, trying to stay on track to graduate.

“My days were pretty down,” Booth recalls. “I was depressed – tired all the time.”

Booth was diagnosed with Focal Segmental Glomerulosclerosis, or FSGS, meaning the filters in the kidneys that filter out urine were scarred – as well as Nephrotic Syndrome, which caused protein to leak into the urine.

Booth had worried about a kidney not becoming available, but finally, in December 2014, Booth was able to get a kidney transplant thanks to a living donor: one of her teachers at West Side Academy High School in Detroit. The generosity saved her life.

“I’m pretty relaxed now. I don’t stress as much,” Booth says. She reflects, “I have a better outcome in life now.”

April is National Donate Life Month – a month dedicated to encouraging people to register as organ donors to save lives. Children’s Hospital of Michigan teamed up with Metro Parent to address the big question, “Should Your Family Be Organ Donors?” to share organ donation facts. Here, Booth encourages others to consider joining the Michigan organ donor registry.

For Booth, finding a kidney all started with a photography book project she made during her time at the hospital going through dialysis. Jenny Fox, who is an art therapist with child life services at Children’s and had worked with Booth, says kids on dialysis sit in the chair for treatment three days a week for five-hour sessions, not able to get up or move around. “Most of us wouldn’t even be able to deal with it,” she says.

That’s where her art projects are a big help, giving kids something to work on, which is empowering, but also gives the patients something to do other than watch TV. Fox and Booth discussed a photo project, which would show what Booth’s day-to-day life at the hospital was really like. The idea, Fox says: “What if you could tell people about it without having to tell people about it?”

Fox recalls the duo worked on the timeline-style book for about two months. Booth took photos throughout her visits, illustrating the ritual of being weighed, having her temperature taken – even showing her view from the dialysis machine. The book was narrated, too.

When Booth took the book to her school to share her story, her teacher read it and was inspired to donate her kidney, thus becoming a living donor for Booth. “Before I found out she was a match, I was kind of nervous to find out (if) she was match,” recalls Booth of the experience, noting she tried not to get too excited right away. She remembers worrying about how it would impact her teacher’s life, too.

Fox was not only amazed by how much the project empowered Booth, but also how it garnered such generosity from her teacher. “I think she just was telling her story, and I think this is an amazing thing that came from that,” Fox says. “Throughout this whole process, she was like I want everybody to have a book so that everybody can tell their story.”

Since having the transplant, Booth has been out of school, but is finally heading back this month. Her life has drastically changed.

“I actually have a lot more free time to hang with my friends and family and enjoy my life now,” she says. Her favorite things to do now? “Exercise and drink a lot of water. I did like exercising then but I do it more.”

Fox notes she and Booth have since worked on a post-transplant book of photos, even highlighting her teacher’s side of the story.

“I know how it felt when I didn’t have that donor,” Booth says – and she adds that her teacher is “outstanding” for becoming her donor. “I’m happy that she did this.”

Being that she regularly received treatment over the years at Children’s, one of the best hospitals in Michigan, she notes she’s also really appreciative of the medical professionals who had a hand in her care.

“I’m blessed and thankful for what they did for me,” Booth says. “If it wasn’t for them I wouldn’t have been as close to a kidney.”

Read all about Children’s Hospital of Michigan’s transplant center in the April 2015 digital issue of Metro Parent.

Joining the Michigan organ donor registry is something Booth signed up to do following her transplant, she says. “I actually got that on my ID.” And she encourages others to give back in the same way.

“They should be donors because it’s worth it. You can save somebody’s life,” she says.

For Booth, her future plans have been shaped by her transplant journey and experience at Children’s Hospital of Michigan. “I would like to actually become a nurse,” she says.

She plans to keep in contact with her donor and Children’s, and eventually come back to visit when she’s in college to “show them this is where it got me.”

To learn more about the organ donation facts and sign up as an organ donor, check out the April 2015 Children’s Hospital of Michigan piece, “Should Your Family Be Organ Donors?” and discover how many lives you could save.