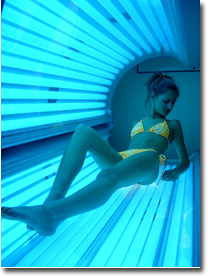 Minors in California who want that bronze glow will have to use the Sunshine State's natural resource instead of tanning beds. The state is the first state in the nation to enact legislation banning minors from using tanning beds, according to media reports released Sunday. The bill was signed into law by Gov. Jerry Brown on Sunday and will take effect on Jan. 1.

Previously, California banned tanning bed use to those 14-years-old and under. Teens ages 15-18 could tan with parental consent. Now, parents don't get to make that call. It's off limits until a child is an adult, per the new California law. No other state restricts minors from tanning salons, but a few states have considered enacting California's original restriction that allows parents to make the call after a certain age. The reason? Skin cancer is the leading cause of cancer death in women between the ages of 25-29 and health organizations largely blame the specific radiation that's emitted from tanning beds.

What do you think about the ban? Should parents or politicians be making the call on whether teens can tan? Get more information on health concerns related to teens and tanning. Is your teen a tanning addict?

Give your teen a head start for financial success — and spark his or her interest, too — with these fun budgeting activities for high school students.
Read more
Sponsored Content

Considering single-gender education for your son or daughter at a southeast Michigan all-male or all-female school? These insights on the pros and cons of single gender schools may help.
Read more
Things to Do

'Even in our darkest moments, there’s light where you least expect it.'
Read more