It's a small spike, but notable. Didn't this disease vanish with vaccines? 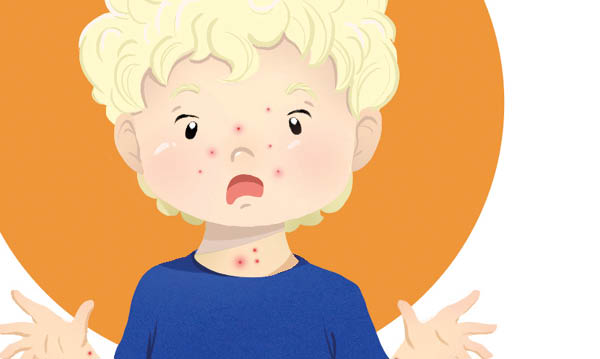 For many parents, chickenpox was a childhood rite of passage. Not for their kids.

Since a vaccine was approved in 1995, cases of the disease dropped 97 percent. However, in a year’s time, Michigan rates shot up 57 percent, the state’s human services department notes. Granted, that’s relative. As of April, there were only 239 total cases, with about 60 here in southeast Michigan, according to local reports. Nearly all affected patients were unvaccinated. Compare that to the 4 million U.S. people who used to get the disease every year, the Centers for Disease Control and Prevention reports.

Still, with school back in session, it’s a good time for some chickenpox 101.

“An infection from the varicella-zoster virus,” explains Dr. Jocelyn Ang, medical director of the infectious disease team at the Children’s Hospital of Michigan in Detroit. Chickenpox is most common among young children, she says.

Symptoms include a fever and an itchy rash that starts on the face and spreads down in the body. Over 10 days, the pink or red bumps – up to 500 total, notes the CDC – turn into blisters and then scabs. “We don’t see it anymore,” says Ang. But, while the “comeback” is minor, she adds, “Outbreak is a concern because chickenpox is highly contagious.”

The best defense is vaccination. “The vaccine should be given to children 12 months to 12 years,” Ang says. It includes two doses: one between 12-15 months and the other at age 4-6 – “before they go to kindergarten.”

The disease spreads quickly through contact with anything the infected child touches, as well as by air through sneezing and coughing. It can also cause serious complications in infants and adolescents. Kids older than 13 who haven’t been vaccinated should get two doses at least 28 days apart, the CDC notes.

The vaccine can cause mild reactions in some kids, such as soreness, fever or mild rash. Serious side effects are “extremely rare,” the CDC adds; chickenpox, meanwhile, used to claim 100-150 lives per year.

If your child is vaccinated, there’s little need to worry, the experts agree. If a child does get chickenpox, though, the worst part typically is the itching from the blisters. Keeping them from scratching is no easy task, but it’s important.

“Use relief for the itching like calamine lotion, so they don’t open the blisters – and to prevent a bacterial infection,” says Ang. Another popular treatment is an oatmeal bath. And, of course, if your child is suffering from chickenpox, keep them home from school and other social situations with anyone not immunized.

If the symptoms worsen, or if any other symptoms such as vomiting, severe cough or difficulty walking appear, contact a health care provider.