Can your child see the number in the circle below? If not, it could be time for a trip to the ophthalmologist. Learn more about colorblindness in kids. 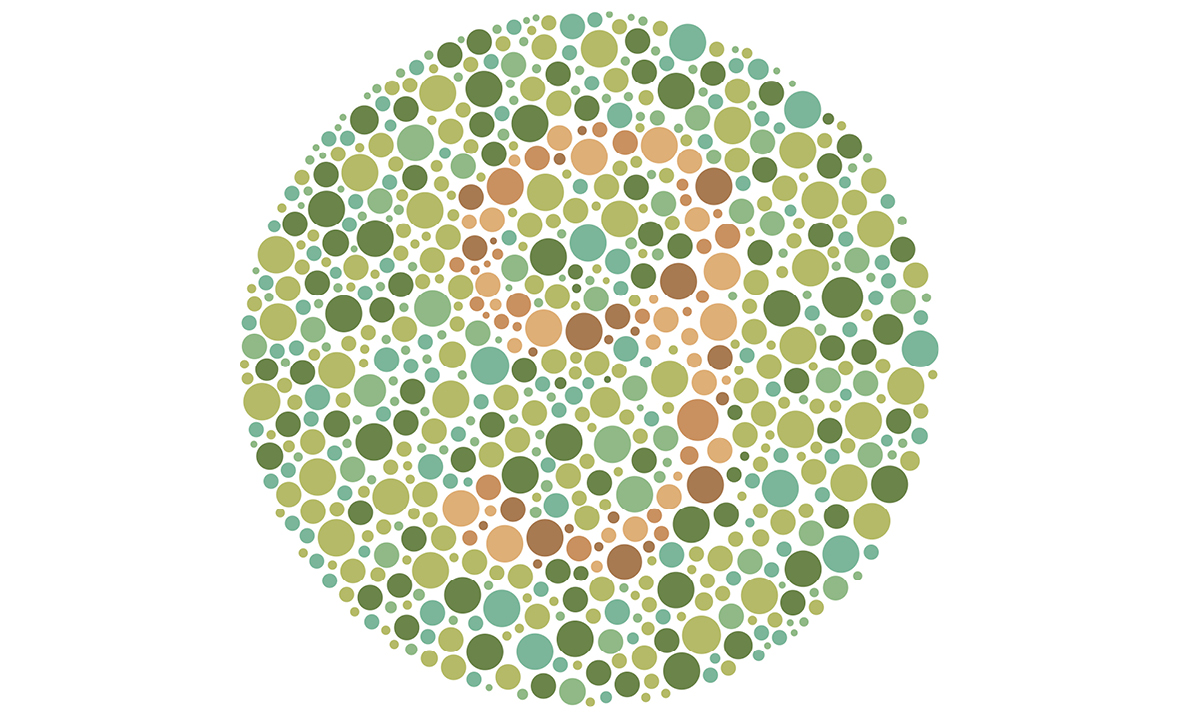 The world isn’t black and white. However, when it comes to colorblindness in kids – or a color deficiency – there might be a few colors missing from the palette.

Learning colors is a key developmental phase for young children. It’s how preschoolers start to distinguish between different things they see, notes Scholastic, and color names are some of the first words kids use to describe things.

Granted, some kids who are a bit stubborn or have wild imaginations might intentionally use an orange crayon when you ask them color a picture with a blue sky.

However, some kids might not recognize that they are using an orange crayon to color that sky blue – or a red crayon to color grass green. Those children could be part of the 8 percent of males and 0.5 percent of females who are affected by colorblindness, according to the National Eye Institute.

According to Dr. Elena Gianfermi of Children’s Eye Care of Michigan – which has locations in Clinton Township, Dearborn, Detroit and West Bloomfield – the national average of 8 percent translates to about 20-40 new male patients a year in Michigan.

Though it affects a small population, colorblindness in kids does occur. Here’s how to determine if your child is part of this population – and what to do if so.

If you hopped on Ms. Frizzle’s magical bus to look closely at a retina, you would see two types of cells that are responsible for understanding light and color: cones and rods.

Rods distinguish between dark and light and cones detect color. There are three types of cones – red, green and blue – and color deficiency is a result of one or more of the cones being damaged or absent, according to the American Academy of Ophthalmology.

There are three categories of color deficiency: red-green, blue-yellow and monochromacy, which is complete colorblindness.

The latter is rare, the National Eye Institute notes, while red-green – identified with the Ishihara test, which includes a series of colored circles (as shown at the top of this page) – is most common.

While some patients develop color-blindness over time as a result of degeneration, the majority of cases are genetic.

It’s a lot of biology speak, but basically colorblindness is almost always decided by the genes – and usually by gender, as well.

Testing for colorblindness in kids

Rotberg says the typical age to test for colorblindness in kids is kindergarten – between ages 4 and 6 – but it is possible to test children as young as 2.

“As long as they can trace a number,” she says, “we can test them.”

The medical tests, Rotberg explains, are broken up into two parts. The first discerns what type of color deficiency is present – red-green, blue-yellow or monochromatic. The second part determines the severity of the deficiency.

It is usually a fairly quick test, with the first part only taking around two minutes and consisting of patients identifying numbers in a pattern of colored dots – again, also referred to as the Ishihara test.

How do you know if your child needs this test? A good place to start is to figure out if there is a genetic predisposition – a family member (usually on the mother’s side) with color deficiencies. Then, talk to teachers and your child about confidence with colors and patterns.

Rotberg notes that parents tend to worry when young children have not yet fully learned all of their colors. She says that, unless there is a genetic predisposition or other vision problems, it’s better to wait until kids are in school to have them tested.

That’s because it is common for children to not know all of their colors, letters or numbers at this stage.

Perhaps you have seen advertisements for EnChroma glasses or read articles about users who are finally able to see color like non-colorblind people with these special specs.

When it comes to kids, though, both Rotberg and Gianfermi caution against the hype when it comes to using glasses to treat color deficiency in children.

“There are no long-term continued studies for the effects on children, and I’m not 100 percent sure people (who use the glasses) see color the way others (non-colorblind people) see color,” Rotberg says. “They are quite expensive, and I have yet to have a parent go for them (for kids). They are generally better for adults in the workforce.”

Gianfermi echoes this. “It doesn’t make sense for kids to have to wear glasses all the time to see enhanced color but not necessarily the same colors as other kids. The stigma could lead to more social issues.”

Other solutions for families

What can families do to address color deficiency or colorblindness in kids, then?

“It is important that the child and his teachers understand that they see colors differently than other children,” Gianfermi says. “Assignments should be printed in black and white on white paper, and parents should teach children the colors of common things – like stop signs are red, or apples can be red or green.”

On its website, the UK-based Colour Blind Awareness group also offers suggestions for teaching colorblind students. Label colored pencils, crayons and markers, for example, and ensure that recreational equipment is neutrally colored – don’t use red or orange balls in gym class outside. Ensure your child is seated in strong, natural light in class when possible to help him or her see better, too.

At home, many sources suggest labeling clothing and food items – such as ketchup and chocolate sauce – to avoid mistakes like mismatched socks and chocolate sauce on chicken nuggets. The Australia-based Women’s and Children’s Health Network also says to be sympathetic to picky eaters because certain foods may look gross – like yellow broccoli, for example.

Most importantly, don’t worry too much that your child is missing out.

“I have yet to have a patient say they really suffer. They learn to live with the deficiency and it doesn’t affect their day to day,” Rotberg says.