Common Toddler Sleep Problems and How to Overcome Them

Want to combat this bedtime battle? Here, two local pediatricians offer advice on helping your little one sleep through the night. 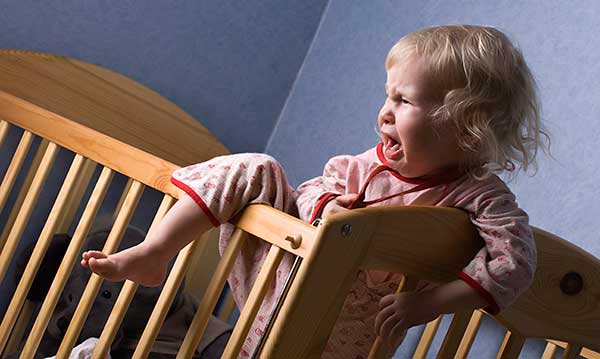 Crying, kicking, screaming or awake at 3 a.m. – who would have thought that sweet baby face could create such conflict when it’s time for bed? If your toddler won’t sleep, just know that you’re not alone. Toddler sleep issues are common and tons of parents are trying to find ways to overcome these toddler bedtime problems.

Some common toddler sleep problems are associated with child developmental stages and are completely normal, while others could indicate health issues. Either way, it’s frustrating. So, how do you overcome this bedtime battle?

Dr. Susan Dombroski – who is a Henry Ford Health System pediatrician in Sterling Heights and mom of one son – says it’s all about consistency.

“Set a bedtime ritual and establish good sleep habits as early as 6 months so they learn how to self-comfort,” she says.

Let’s look further into the five most common toddler sleep problems with advice from experts on how to overcome them.

It’s 8 p.m. and your 2-year-old is having a full-blown tantrum when the word “bedtime” is announced. Do you let him cry it out? Do you console her? While crying is normal at this time for a toddler, he or she can be conditioned to communicate with you in other ways based on your reaction. Dombroski says it’s good to “let them throw their tantrum and don’t give in to what they want.” Instead, she says to leave them for 10-15 minutes to settle down and then continue with their bedtime routine.

You’re sleepy soundly, when all of a sudden you hear a piercing scream coming from your toddler’s bedroom. She’s having another nightmare – one thing we’d say is definitely one of those common toddler sleep issues. What is causing these episodes?

It could be related to an event, stress, being too tired or something as simple as a scary television show. Despite the cause, it’s important to know what you can do to help your child cope with them. Dr. Marcus DeGraw, a pediatrician at St. John Providence Hospital in Grosse Pointe and dad of three daughters, says to “make an appearance, reassure them, comfort them and spend a couple of minutes letting them know they are safe.”

Be sure to keep it short and simple, he says.

That’s not the lawnmower you’re hearing at midnight – it’s your 3-year-old who is snoring! While many parents shrug their shoulders and return to bed, it’s important to take note because toddler snoring could indicate a more serious health problem such as sleep apnea.

Dombroski says some toddler snoring is normal. However, “if there’s any pauses where it seems as if they’re not breathing or holding their breath and then they start up again, that’s a sign of sleep apnea or the tonsils being too big.” At that point, it’s important to see a doctor.

Climbing out of their crib

You turn over in the middle of the night to see two little eyes in the darkness that nearly scare you half to death. It’s your 14-month-old, and he’s climbed out of his crib again. Being such a dangerous stunt for your little climber, this is one of the toddler bedtime problems that’s best to address it right away.

“Once they start climbing out of their crib, move them into a toddler bed,” DeGraw suggests. “Then, adjust their sleep patterns. Always take the same approach. Pick them up, put them back to bed, reassure them that you are there for them if they need you and leave the room.”

Continue to do this until your child understands that’s where he needs to sleep.

You hear a small voice in the middle of the night and realize your toddler won’t sleep again. What is the cause of this? Not having a consistent sleep cycle for your little one. Maybe you were the parent who soothed and rocked your child to sleep, or maybe you shared your bed for a while. Whatever the history, there are ways to break this inconsistent sleep cycle.

“Consistency is key,” says DeGraw. Kids should go to bed and wake up at the same time – even on special occasions.

Aside from the schedule, DeGraw doesn’t see a place for electronics in the bedroom.

“Television is the worst thing to ever give a child for their bedroom. Even electronics have screens that emit a special kind of light telling the brain to wake up. Most children who have trouble with falling asleep are likely to be children whose sleep patterns are irregular to begin with.”

Take your kids to see and sing along with their favorite Disney movies at Lighthouse ArtSpace Detroit.
Read more
Travel