Parents are reminded to make sure their teens don't use contacts that aren't prescribed by a doctor after one local girl suffered severe consequences. 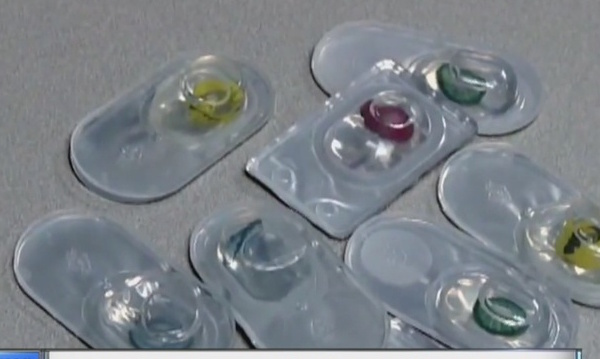 Around Halloween, teens and even grown-ups might be compelled to turn their eyes blood red, completely black or even white to coordinate with a creepy costume.

But while contact lenses that offer these effects can look spooky, kids should know that the risks of using them are much scarier, experts say.

One local teen is all too familiar with this fact after she and her friends used costume contacts while dressing up as zombies. After wearing the lenses, the St. Clair Shores girl noticed one of her eyes was swollen and it turned out the lens had ripped out a top layer of her cornea, WXYZ Detroit reports.

She’s now partially blind in that eye and may need surgery.

“I’m devastated,” the girl’s mother, Dawn Carpenter, tells the news station. “This happened in late September and we have been going to the opthamologist every day.”

The teen reportedly bought the contacts at the Gibraltar Trade Center in Mount Clemens, even though it’s illegal to sell costume contacts without a prescription in Michigan, WXYZ reports.

Dr. Elizabeth Becker, a practicing optometrist in Oxford and the president of the Michigan Optometric Association, says the law isn’t intended to stop anyone’s fun but instead is a matter of safety.

“The problem with the cosmetic contact lenses every year is we find out they’re being sold in party stores and places like that,” she says. “That’s illegal in Michigan because it’s so unsafe – not because we want to be party poopers.”

Contact lenses should only be used after a contact lens exam, contact fitting and instruction from a professional on how to properly use them, Becker says.

“The person wearing them needs to be taught how to wear them and how to look after them to be safe,” she says. “It’s a really big deal.”

Health risks associated with wearing contact lenses that haven’t been prescribed to you include scratches on the cornea, corneal infection, pink eye, decreased vision and blindness, according to the U.S. Food and Drug Administration.

Contact lenses should never be purchased from street vendors, salons, flea markets, Halloween stores or online (unless the site requires a prescription), the FDA reports.

Wearing cosmetic contact lenses can lead to infections caused by bacteria, a fungus or a virus, Becker says.

“Fungus infections in the eye are horrible to get rid of, they take months to get rid of and leave permanent scarring. It’s very tragic,” Becker says.

“This is not just fear-mongering. It’s real,” she says.

Moms and dads of teens should discuss the risks with their kids and make sure costume lenses aren’t purchased or used.

“Parents should not let their teens order them online or buy them from a non-professional source,” Becker says. “If their teenager has already purchased them, they shouldn’t be wearing them.”

If your teen is interested in wearing contact lenses in the future, keep in mind that experts recommend an annual eye exam for kids.

“Many of the health plans that we now have include a comprehensive eye exam for anyone 18 and under. There are a lot of parents who don’t realize it’s available,” Becker says. “Then you have a relationship with someone who looks after your eyes and you already know someone who you can work with, which is a lot more likely to work than risking buying something that your friends says works.”

You can find more information on the risks of costume contact lenses here.