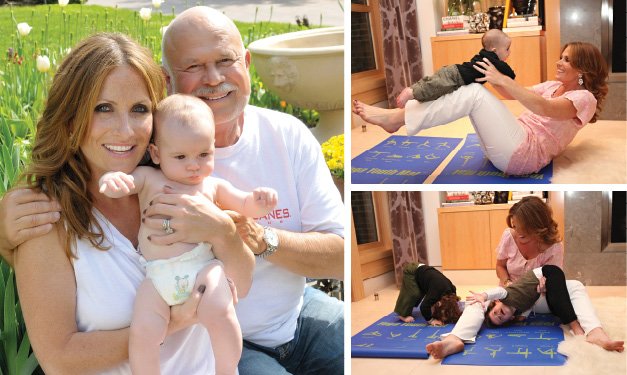 Three tough, young teen girls strutted to the front of a gym and faced 100 of their peers. Then, their yoga teacher rang a bell. And everything shifted.

“They became still and calm, and there was this presence of peace,” recalls Danialle Karmanos of the scene, at a Boys & Girls Club in Highland Park. “All the kids were riveted. There wasn’t a single kid in the room who made fun of them.

“I have goose bumps now, even thinking about it.”

“Kids need structure to be their best and thrive,” she says.

Did we mention she’s got three little boys … all under the age of 2? “With the twins, from the time they were born, we got them on a schedule,” she laughs. That’s gone double for wee Spiros Maximus, who just arrived on Feb. 13.

Karmanos is one mama with plenty to juggle. Add an elected position (she’s on the Wayne State University Board of Governors) and high-profile hubby (Peter Karmanos Jr., who recently stepped down as CEO of Compuware Corp. and now serves as full-time executive chair) of to the mix, and it’s no wonder she keeps tight work hours, too. “I get my stuff done during naptime!”

But it’s also clear Karmanos is deeply moved by these young lives – all of them.

“I’ve always felt a fierce determination to protect and advocate for kids,” she says. “I feel very, very strongly, working with kids, there’s no room for error.”

Her own childhood in Dearborn may have set the stage. Although her parents divorced when she was 3, Karmanos has vivid memories of weekends at Belle Isle and festivals with dad, and “journeys” with mom – like buying 25-cent pepperoni rolls at a bakery, then savoring them by the Ford headquarters fountain.

Her mother, a family psychologist, also attuned young Karmanos to a “mind, body and spirit” connection – a key element of yoga. “Just having that awareness gave me the opportunity to see things with a little different perspective,” says Karmanos, who’s been practicing yoga since her 20s.

Flash ahead to six years ago. Newlywed Danialle and Peter gobbled up headlines together (“We’re both news junkies,” says Karmanos, who has her journalism degree from WSU). But one topic kept gnawing at her: childhood obesity.

Back then, the epidemic was just emerging. “Somebody’s got to do something about this,” she recalls thinking. Till it hit her. “I’m that somebody!”

She started her nonprofit slowly and strategically. “Our mission – from the beginning – is to equip kids with the tools to make healthy choices.”

In two key areas: eating more mindfully and getting active.

Actually, yoga wasn’t the original plan – just a piece. “To our surprise, it was really resonating with the kids,” Karmanos says. Today, it’s core. From their breath to breakfast, kids – usually ages 6-15, and often in Detroit – learn lifestyle shifts with a certified yoga instructor, in small groups. The free, one-hour sessions are highly organized. There’s a full half-hour of yoga; another 10 minutes of relaxation.

“They have this safe environment to be still to focus on themselves,” Karmanos says. Kids carry it home, too. Literally, with new yoga mats they receive.

That indoor activity is crucial, says Karmanos, since many live in rougher neighborhoods where outdoor play can be dangerous.

And it’s sticking. One school kept offering yoga to students – as an incentive to do their homework.

“For me, the most exciting part is seeing their excitement,” Karmanos says.
It’s no different with her brood. From the moment they wake up, when mom and dad pop into the kids’ room, “We all start yelling and dancing,” she laughs. Right to the end of the day, when Pete gets home at 6 o’clock, on the dot, for family dinner.

“He really is an incredible dad,” she says.

For all his energy, you’d never guess it’s his second go. Pete, 68, also has eight grandkids.

The couple first bumped into each other at their salon. The chemistry was instant. “We laugh a lot,” Karmanos says. Though, “We are absolutely Ricky and Lucy sometimes!

“It’s really cool to have this big extended family,” she adds. The vacations are a blast. Ditto for the big Greek family dinners. “We all get along.”

Has it changed her perspective on age and parenting? “I feel like I don’t take anything for granted. I totally appreciate every day.”

Like the mini local “adventures” she now takes with her kids. Or just hanging out listening to the twins chatter (“They are hilarious!”).

Some moments she films. Others she captures with her Gratitude Journal app. But the best might be the ones that just happen – when she’s still and calm.

“That’s important, to just take a couple minutes to just focus – being a mom,” she says. “It all goes by so quickly. I want to just hit pause and just bask.”