How to Help Kids Deal With ‘Hangriness’ and Over-Exhaustion

Young kids experience hunger, exhaustion and illness more intensely than older kids and adults. Find out how parents can help kids with deal with hangriness. 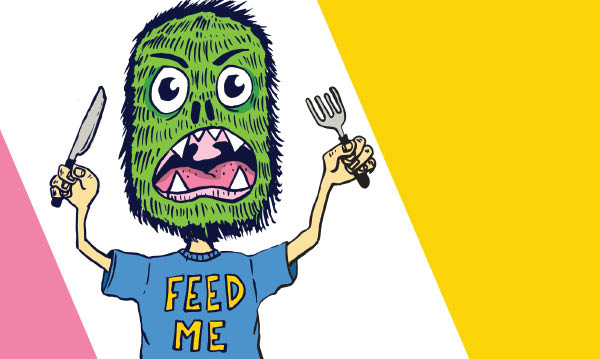 Parents are no strangers to tears streaming down small reddened faces. Little children have trouble controlling their emotions and behavior when one of their “core conditions,” like being hungry, tired or sick, are affected. What can parents do to help kids deal with hangriness and over-exhaustion? And why is it such an issue for little kids?

“Essentially, their brains can’t function if they don’t have appropriate hydration and nutrition, so the part of their brain that controls their behavior and function isn’t getting all the fuel it needs,” says Dr. Danelle Stabel, a pediatrician with Henry Ford Health System in Troy.

Stabel is referring to the prefrontal cortex, which regulates behavior and is located in the front of the brain.

“Same thing when you’re sick. Your body is working hard to fight off an infection, so it’s using the fuel for that instead of for full function of your brain. So you gotta have ideal conditions for ideal function.”

Toddlers are most susceptible to that hangry monster, Stabel says, referring to irritability that stems from hunger. It’s most common with ages 2 to 5 – primarily preschoolers.

“Hangriness” varies among children. The diminished ability to control their behavior depends on the situation and the cause.

“(A) common one is a kid who has been sleep-deprived because they’re starting to get a little sick, so they’re up all night coughing,” Stabel says. “There’s a change in their routine, so they didn’t quite get enough sleep overnight.”

A deviation from the normal daily schedule is a common trigger. Facing a hangry or overly tired kid is especially stressful to handle on vacation, when the child’s sleeping and eating schedule is drastically changed.

“It’s pretty common in toddlers (whose) schedule is thrown off for meals,” Stable says. “So they start to get hungry and parents notice that they’re crying more or throwing a temper tantrum.”

Stick to the schedule

“It’s tough to be strict with a young child, but as long as it’s consistent – children do well with being able to expect what’s going on.”

Especially concerning sleep. Stabel says defining “consistent sleep” depends on age and can vary from kid to kid. For example, most kids ages 1-2 take two naps a day and still get 10-12 hours of sleep overnight, but these numbers usually decrease with age, Stabel says.

“You should know your kid and how many hours they need of sleep, which can be an ongoing issue.”

“A lot of toddlers need two to three snacks between meal times – and sometimes more, depending on their eating habits,” Stabel says. Factors might vary a bit for a finicky eater.

She suggests keeping on-the-go snacks like fruits and vegetables. Other examples include peas, crackers and pretzels. Stay away from sugary treats, she adds.

“While you don’t have to necessarily tell your kids that it’s OK to throw a temper tantrum, try to remember why they’re having a tantrum, be patient, and keep calm as (you’re) dealing with the situation,” Stabel says.

Another tip to help kids deal with hangriness? Read to kids.

“It helps to develop language abilities and good connections between parents and kids,” she explains. “Long-term – as far as a behavioral thing – the better a child can express themselves, the easier it is to figure out what’s going on in a situation like that.”