How to Protect Kids From Germs

Big kids have big opportunities to touch and pass all sorts of germs every day. Where are germs commonly found? Learn more, plus find tips on how to protect kids from germs. 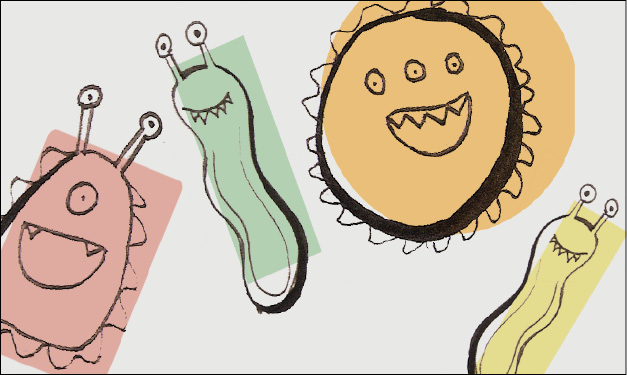 Let’s face it: Kids aren’t exactly the kings and queens of clean. After all, they’ve been known to share juice boxes, use their hands to blow their nose and sneeze into the stratosphere.

And that’s not counting the bad bugs they pick up in places you’d least expect: Playgrounds and petting zoos can all be seriously icky germy zones. That’s why it’s important to be prepared to protect your child from some of the grossest areas.

Here are five, and some advice on how to keep from getting sick.

Your local jungle gym is more germ-infested than a public bathroom, according to one study. Why?

“Restrooms tend to get disinfected often,” says Dr. Kelly Reynolds, a professor at the University of Arizona College of Public Health. “But playground equipment almost never gets cleaned.”

Tempted to clean ladders and handles with a disinfecting wipe? Don’t bother. It’s practically impossible to keep up with all the germs.

Instead, teach your child not to touch her mouth, nose or eyes when she’s at the playground, and clean her hands with an alcohol-based hand gel before you leave the park.

And if you have a backyard sandbox, keep it covered when you’re not using it.

Don’t be fooled by the antiseptic smell. With all the sick little patients (especially during cold and flu season), the waiting room is a virtual petri dish.

Have your child wash her hands before going to the doctor, so she’ll be less likely to pass along a bug to other kids. If she’s getting a checkup, ask if there’s a well-child waiting area (where the germ load is bound to be lower). Take along your own toys and books, so she doesn’t play with communal ones.

“The last thing you want is for her to contract a different illness at the doctor’s office,” says Dr. Andrew Nowalk, associate professor of pediatrics at the University of Pittsburgh School of Medicine.

A typical drinking fountain contains more harmful germs than a public toilet seat, according to a study at elementary schools by NSF International, a nonprofit health and safety organization based in Ann Arbor.

Kids tend to touch the spigot with their fingers or their mouths, passing on germs to the next person who drinks.

Teach your child to keep his lips (and fingers) off the spigot and to let the water run for a few seconds before sipping.

“That helps wash away harmful organisms,” says Robert Donofrio, formerly of NSF International. Or take along a separate water bottle – just make sure he’s the only one who drinks from it!

Enclosed play areas containing plastic balls, which are popular at kids’ gyms and fast-food restaurants, are among the dirtiest places to let your child roam.

“Kids with leaky diapers play in them, and the pits rarely get cleaned,” says Dr. Reynolds.

If you decide to visit a pit, tell your child that he must thoroughly wash his hands before and after playing.

These have been linked to major E. coli outbreaks in recent years. It’s not hard to see why. Farm animals aren’t choosy about where they lie down, and traces of feces from an animal’s fur or saliva could easily get onto your child’s hands – and (yuck!) her mouth.

Don’t take a child younger than 3 to a petting zoo (or, if you do, let her look but not touch).

“No matter how much you warn her not to, a young child is likely to suck her thumb or touch her hand to her mouth,” Dr. Nowalk says.

Even older kids may need reminders not to touch their mouths after petting – and to use an alcohol-based hand gel when they’re done.

Are gunk and germs actually good for kids? Learn more facts about germs and kids from the pros here.