Introduce Your Baby to Solid Foods 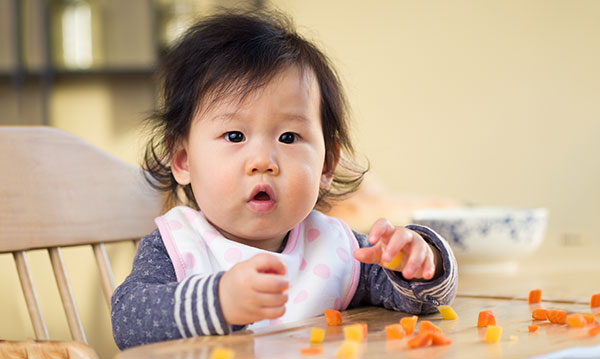 At what age should you start introducing a baby to solid food? I’ve heard that if you start too early, it can cause allergies, but then someone told me that isn’t true.

The age at which to begin solid food in infants has no clear-cut answer. A generation ago it was common to begin giving babies solid foods at 6 weeks. Now we would consider that too early but when recommendations change frequently it is usually because the answer is not absolute.

Currently we recommend beginning babies on solid foods between 4 and 6 months old. If the baby is being feed formula there is good evidence that starting solid foods earlier leads to higher rates of obesity, so formula-fed babies should be at least 6 months old before starting solids. There is no good evidence in breastfed babies about obesity related to the timing of beginning feedings but it may be the same.

Nutritionally all the child needs for the entire first year is either breast milk or formula but by the time they get to be that age they will be so hungry they will never stop drinking. When a child gets to the point where 8 oz bottles, or every 2-3 hour breast feeds are not keeping them full, it is time to begin solid food. Begin slowly, usually with rice cereal and then oatmeal once a day. Monitor the liquid intake. The child should not drop below 5-6 nursings per day or 28 oz of formula. If they drop below those thresholds then they are getting too much solid food and that amount should be reduced.

Food allergies are a complicated and unresolved issue. Right now we recommend holding off on the most highly allergic foods until at least 15 months old. These would be eggs, fish, peanut butter, citrus and fresh strawberries. We currently recommend holding peanut butter until at least 2 years old, and in a family with a strong history of food allergies, to wait until 3 years old. There was one small study that demonstrated that by giving peanut butter earlier the frequency of allergy was reduced but this study has not yet been replicated so it is not the current recommendation.

Whenever I see recommendations change drastically from one generation to the next I expect that they will change again. Food introduction is a rapidly-changing field so stay tuned for more changes to come.