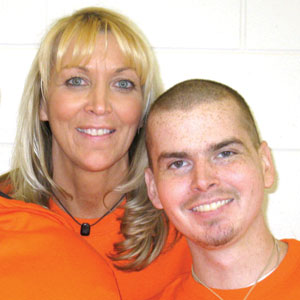 Mindy Flowers-Daisy traveled 155 miles across Michigan, on foot, to raise leukemia awareness and funds – and honor her son, Kory Daisy.

Her October journey ended at the University of Michigan’s Comprehensive Cancer Center in Ann Arbor, where Kory had received treatments for blood cancer. Kory lost his fight two years ago, at age 24.

Driven by this, Mindy created the nonprofit Pennies from Heaven in 2012. Its goal is to help 21- to 30-year-old young adults with their living expenses as they are battling cancer, and to provide them comfort.

“We talked about wanting to do a nonprofit to help these young adults,” Mindy says of her and Kory, before his death. “There’s such a huge gap between kids and adults” in the care they can afford – or that’s even available.

Mindy began her five-day walk at Kory’s grave in Stevensville, in Berrien County on the state’s west side, and reached the Ann Arbor medical center on Oct. 10 as planned – the day Kory was diagnosed and when he relapsed.

“My walk was fantastic,” Mindy says. She knew the distance would be a challenge, but adds, “I also know going through chemo is a difficult thing. I didn’t want to do something that was easy.”

Around late October, Mindy estimated she’d raised about $5,000 to $6,000 for Pennies from Heaven. “I don’t want to see somebody suffer like we did,” she says. “It’s our pay it forward.”

You can still support Pennies from Heaven by making a donation or purchasing a T-shirt or hooded sweatshirt.