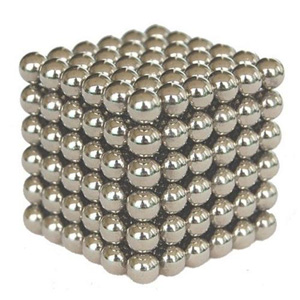 Exploring children will eat anything they can get their hands on, no matter how inedible these objects might actually be. So it's no surprise kids have scarfed their share of magnets. But over the past decade, emergency room visits due to these accidents – especially with high-powered magnets that have hit the market – have skyrocketed, according to a recent study by the American College of Emergency Physicians (ACEP).

The study, released Aug. 7, reveals that such ER trips have quintupled since 2002. It notes that over a 10-year period, 22,581 cases of magnet ingestion were reported – with the majority happening in or after 2007.

Not only were small children rushed to the hospital: Older kids were seen, too, due to, the ACEP believes, imitation nasal and mouth piercings that use high-powered magnets held together on opposite sides of the skin.

Magnets are one of the more dangerous objects a child can grab – particularly those containing a rare earth element called neodymium. These can be up to 10 times stronger than normal magnets, like the type that keep art projects from flying off the fridge.

There were so many accidents involving these super magnets, in fact, that one product for adults containing neodymium was taken off the market last year. The U.S. Consumer Product Safety Commission issued a federal stop-sale order for a desk toy called Buckyballs – the first ban by the commission in 11 years.

Despite the backlash of fans and controversy surrounding the decision, the hazards of neodymium are real – and potentially life-threatening. Proof came from cases like that of Presley Bjarnson, a 20-month-old who swallowed 18 Buckyballs and 3-year-old Payton Bushnell, who swallowed 37. In both cases, without proper medical attention, the results could have been fatal.

These magnets are especially dangerous when two or more are swallowed because the magnets can stick together inside the body, causing serious harm to intestines, explains Dr. Mohammed Arsiwala, president of Michigan Urgent Care Center – which has centers in Oakland, Washtenaw and Wayne counties.

"If a child swallowed a magnet at 6 a.m. and another at noon," he explains, "they can find each other and cause perforation (of the intestines), vascular damage, intestinal obstruction and volvulus – which is twisting of the bowel." He says in his 14-year experience in urgent care, he too has recently seen a spike in magnet-related visits.

He offers some tips on how parents can keep an eye out for magnet ingestion and some approaches the doctor may take to remove the foreign object.

Possible removal options for ingested magnets include the following:

Arsiwala says the best things parents can do to help their child in this type of situation is to be observant and vigilant. Don't wait to get the issue checked out if you notice a change in behavior – or any of the above symptoms. Be sure to keep an eye out for magnets missing from toys, watches and electronic devices, too.