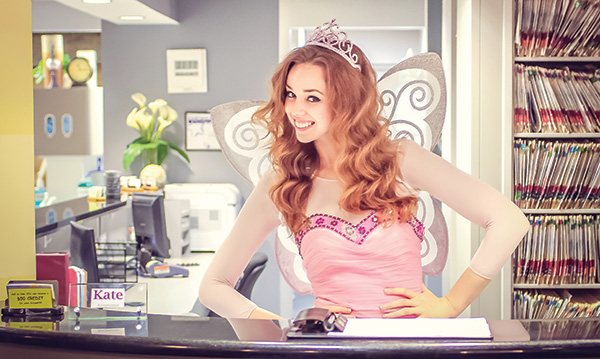 The tooth fairy has a packed schedule this month. But you won’t find her peeking under pillows. Not this one, anyway! As the official winged ambassador for Bright Side Dental in metro Detroit, Jessie Vanatta is isn’t about collecting teeth; she’s about taking care of them. She takes that message to local elementary schools during National Children’s Dental Health Month. We chatted up the molar mogul to learn more.

So. How did this model from Warren, who turns 25 this month, become a famous fairy? It’s a family affair. Vanatta’s sister, Pam Lenning, handles marketing for Bright Side with Rebuild Nation and was looking for good way to get kids excited about oral hygiene. The idea hit her: tooth fairy! Her kid sister, who also manages movie casting, was on board. Now in their fifth February, the pair teams up to teach 2,000 kids a year. “Going to the dentist can be scary for kids,” she says. “We try to make it fun.”

During presentations, the bubbly Vanatta floats around the room in her pink poufy dress, ballet slippers and tooth-shaped necklace, complete with puppets and props like a magic toothbrush and giant tooth costumes. She leads fun games and talks to kids about how different foods affect teeth, what tools dental hygienists use – and how to keep sugar bugs out (hint: floss!). “A sugar bug is what we like to call the things that get stuck between their teeth,” Vanatta explains. “When they hear about sugar bugs, they say things like ‘Oh no, I don’t want that in my mouth!’ It’s really funny.” At the end, each kid gets a goody bag from the dentist’s office.

As with Santa and the Easter Bunny, kids learn the fairy’s big secret at different times. So Vanatta gets all kinds of reactions. “When I walk into the room, they get so amazed and they want to give me hugs,” she says. “I do have some kids that say, ‘Oh, you’re not real,’ or they will ask if I can fly and things like that. We just tell them my wings shrink or that there are multiple tooth fairies.” She also gets a lot of kids that tell her that they want to be dentists – and that their favorite foods are broccoli or carrots. One brave child even owned up to loving Brussels sprouts. Adds sis Lenning, “She really gets into character, and that is what makes it a magical experience for kids.”

“Kids should brush their teeth two times a day for about two minutes,” Vanatta says. “If they don’t have a toothbrush with them, they should rinse with water.” Brush in little circles, she adds, enjoy sugary foods and drinks in moderation – and visit the dentist twice a year. “It will catch up with them later on! They don’t realize it now, but they will have to deal with it later.”

Vanatta makes free appearances in classrooms up to third grade during February and at scheduled times throughout the year. She also pops into the nine full-service Bright Side Dental offices in southeast Michigan. Want her to visit your school or day care? Call 800-PAINLESS. “We have fun every year and we enjoy going to as many schools as possible,” Vanatta says. Learn more at brightsidedental.com.