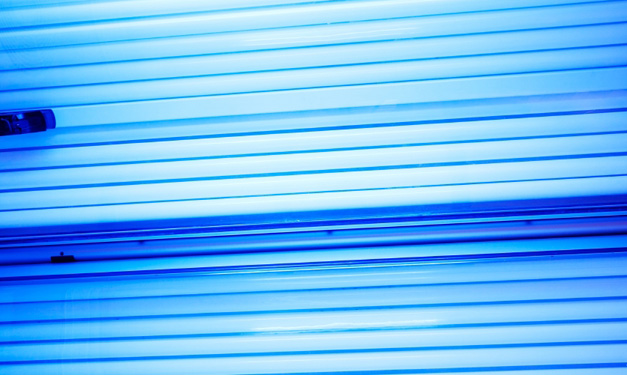 Tanning is hot – especially for teens. One study found 24 percent have gone at least once; many go more frequently.

“In many areas, there are more tanning salons than there are McDonald’s and Starbucks,” says pediatrician Sophie J. Balk, M.D., lead author for the American Academy of Pediatrics 2011 policy statement on the risks of ultraviolet radiation to children and adolescents.

Other health authorities also support laws banning minors from tanning, 60 percent of states regulate it and now the state of California has officially banned the use of tanning beds for those under age 18. Yet parental awareness is often lagging.

Many habitual tanners believe the industry’s claim that artificial rays are a safe sun alternative. Not true, says the AAP. Their 2011 report states the UV radiation produced can be 10 to 15 times stronger than the midday sun.

UV radiation is a known carcinogen, like arsenic, asbestos and cigarette smoke, says Balk. The rates of melanoma, the deadliest form of skin cancer, have been on the rise for the past 30 years, with recent spikes in white women ages 20-29. Tanning beds are partly to blame, the AAP says.

Early detection is key: Melanomas that have spread have no good treatment options. In these cases, the five-year survival rate is only 20 percent.

“I have a patient who developed a melanoma at 18,” says Neera Agarwal-Antal, M.D., director of pediatric dermatology for Akron Children’s Hospital in Ohio. “She started tanning at 14.

“There are no benefits to using a tanning bed. It’s not OK, even in moderation.”

There are other risks, too, like early cataracts, rashes and prescription drug interactions. They’re hot beds for stuff like herpes, warts and viral disease, Agarwal-Antal adds, and can prompt premature wrinkles and sagging skin.

Still, many teens are undeterred in their quest for sun-kissed skin. Why is it such a tough habit to break? Are some kids truly addicted? Maybe, says Agarwal-Antal. “My patients tell me that they’re addicted to how they look when they tan,” she says. “They feel social pressure to be tan. That needs to change.”

One step is promoting a new beauty ideal. The fashion industry is doing its part: Some magazines, including Cosmopolitan, are working to change cultural messaging that promotes indoor tanning.

Surprisingly, Hollywood is helping, too. Many of today’s biggest stars are living proof that pale is pretty. Count “It girls” Amanda Seyfried, Scarlett Johansson and Taylor Swift among young celebs who stay out of the sun.

The best tan is none, says Agarwal-Antal. Parents and teens need to regard tanning the same way as recreational drug use, smoking, or sex: a risky behavior that can have long-lasting heath consequences, she says.

“We need to teach our kids to be wary of the sun.”

The safest sun is shade, agrees Charles Shubin, M.D., director of pediatrics at Mercy Family Care in Baltimore. Even sunscreens aren’t foolproof, he notes: They wear off, and most people don’t use enough.

To safeguard skin, pros recommend avoiding sun during peak hours of 10 a.m. and 4 p.m., wearing hats with a three-inch brim, choosing clothing with built-in sun protection, and always using sunscreen (one ounce per application). Agarwal-Antal advises an SPF of at least 50 for the body and 70 for the face.

Moms can wield great influence over their tanning teens by embracing their natural complexions. Don’t show your kids that you need a tan to feel good or attractive, says Agarwal-Antal. Accept your own natural skin tone, and you’ll encourage teens to do the same.